An essential part of the project is public policy concerning rates and consumption monitoring undertaken in the Town Hall of Saragossa, the public administration responsible for the management of the entire water cycle in the city. This article provides a summary of the 11 year lifetime of the project and its main results. It also highlights the importance of the comprehensive installation of water meters and of the new water bills.

WHAT IS THE POINT OF A WATER EFFICIENCY PROJECT IN SARAGOSSA?
Eleven million Spanish citizens were suffering daily water restrictions in 1995. During those years there were also demonstrations and disputes between regions. Water was the cause of the conflict. At that time the discussion centred on how to build more reservoirs, which water basin transfers to make, and how the required million euro budgets could be raised. On top of that was a threefold paradox: Spain was the third largest per capita consumer of water in the world, was suffering from a serious scarcity of the resource, and its price was surprisingly low.

The Ecology and Development Foundation (ECODES) decided to make a commitment to demonstrating the possibility of resolving water scarcity problems by employing a cheaper, more environmentally friendly approach that avoided social conflict – by saving water and increasing the efficiency of its use. Thus in 1996 the Saragossa, Water Saving City project was designed. The project has developed over the years of its execution and has evolved through a range of different phases. The first phase approved by the European Union was ‘Small steps, major solutions’, which was undertaken from February 1997 to January 1999. 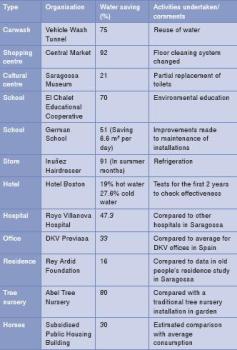 Having identified these 50 examples of good practice, a third phase was initiated, ‘A school for efficient water consumption’ (2004 to 2006), the objective of which was to extend and enlarge the model activities based on the rational and efficient use of water identified in phase II. Information on the examples identified in the previous phase was to be disseminated around the city to stimulate their imitation. To this end, practical guides were drawn up for each sector and distributed among more than 10,000 consumers in the city.

Now ECODES has set off on a new journey to consolidate Saragossa as a reference city for efficient water management and consumption, and more so now that it has become the world water capital following its designation as the organising city of the Expo Zaragoza 2008 and as the headquarters of the International Water Secretariat. This latest ‘100,000 commitments’ phase aims for 25,000 organisations, institutions and citizens to take at least four steps that promote correct water consumption.

MAIN RESULTS OBTAINED TO DATE
Eleven years of working on water efficiency in Saragossa have contributed to a major reduction in domestic water consumption in the city. The average quantity of water metered in 2007 was 126 litres/inhabitant/day – well below the national average of 147 litres/inhabitant/day.

Fifty examples of good practice in efficient water consumption in public buildings, gardens and industry, which have reduced their consumption by an average 49 percent, have been identified and promoted. Information on these examples has been disseminated to more 10,000 similar users.

By April 2008, 209 organisations and 20,000 individuals had already made a commitment to water in the city, which is the equivalent of more than 90,000 commitments.

The participation in water saving has been both wideranging and active, including: 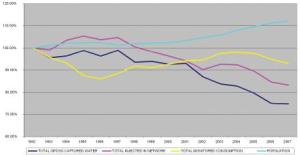 Figure 1 – Percentage of water captured,
injected into the network and measured

Six thousand examples of the Water Newspaper have also been published and an electronic bulletin is sent to more than two thousand addresses with information on the project and other news pertaining to water management. In addition Internet sites have been developed with information on water saving technology, regulations, bibliography, consultancy, etc. (www.agua-dulce.org and www.zaragozaconelagua.org).

THE IMPORTANCE OF WATER METERING AND BILLING
First, it should be pointed out that Saragossa town hall directly manages the entire water cycle in the city. This is not the case in the majority of Spanish provincial cities. Efficient water management in Saragossa is the result of the application of a range of strategies in complementary fields in which co-ordination between activities is essential: investment in infrastructure, adaptation of water quality to its end use, introduction of water efficiency technologies for consumption, promotion of citizen participation, and development of economic tools to foster efficient attitudes in consumers.

One of the most common areas of intervention is the comprehensive installation of separate meters at all points of consumption. Since the beginning of the 20th century, meter installation has been compulsory in homes in Saragossa, and from the 1970s, all new buildings have had to have an easily accessible water meter room to centralise the reading of all the units in the building.

Efforts made in this area mean that Saragossa has one of the highest rates of water meter use in Spain. There is a water meter for every 2.03 inhabitants in Saragossa. In other words, there are more than 325,000 meters for a population of around 660,000. Saragossa is currently making a commitment to the latest technologies for measuring consumption, and has started to install electronic meters can be read remotely in new buildings. These meters provide a information for the detection of leaks or for understanding consumption habits, with automatic readings on pre-established days and in timebands.

Work is also being carried out with meter manufacturers to develop software to enable users to access their consumption data from their own homes. A web page is undergoing tests enabling consumers in an industrial park in the city to consult their latest consumption readings and consumption history, aided by graphs and tables, for any required period of time. 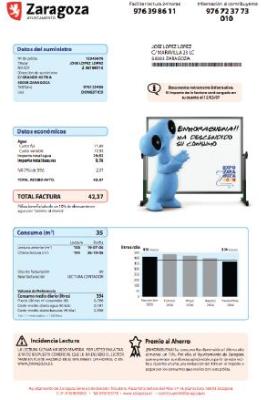 Moreover, for the Expo Zaragoza 2008 which is being held in the city under the banner of ‘Water and sustainable development’, electronic meters are being installed that can be read remotely by radio to monitor the consumption of water in the exhibition centre. Participants will be able to consult consumption in real time on a web page.

The technical services of the town hall have a maintenance programme that plans to replace 9.5 percent of meters annually because of their age. And whenever the owner of a home or premises changes, the meter installed will be replaced.

The investment effort in meters has made it possible for rates applied for the supply and treatment of water to become a powerful tool to incentivise efficient consumer habits in the use of water. If it were not possible to monitor the consumption of citizens with separate meters, the effectiveness of rate setting would be much reduced.

As a consequence of this privileged situation, the city of Saragossa changed its water rates in 2005 in an attempt to adapt to the demands of the European Water Framework Directive and in response to a clear political will to foster savings. The effectiveness of the new rates is demonstrated in Figure 1, which shows how consumption has started to fall since their introduction, despite a rising trend since 1995.

From the efficiency point of view, the effectiveness of the rates is not only the result of their progressive structure and adaptation to the real life habits of consumers in Saragossa, but has also been favoured by several complementary factors: