Some of the global level findings from this research, highlighting advanced meter initiatives in Europe, are presented here in preparation for the Metering Europe event in Amsterdam in September.

With the help of leading utility meter suppliers worldwide, IMS Research estimates the global market for utility meters in 2007, for all four utility types, to be roughly 210 million units and worth over $8 billion. Of these new meter shipments in 2007, between 6-7% are estimated to be advanced meters, or roughly 15 million units.

Although electricity meters dominate meter shipments, as well as advanced meter shipments, it is important to note the progress within the other utility types regarding advanced metering. With the United States being the primary market for AMR/AMI in gas and water provision for over a decade, recent installations have occurred globally in both utility types, notably in China and parts of Europe. With the advent of AMI, continued adoption of automated gas and water connections holds great promise as instances of “piggy backing” are expected to increase, whereby the gas and/or water meter uses the electricity meter, and related network, to send consumption data upstream to the utility. Still the most compelling drivers reside in electricity delivery, for example time-of-use (TOU), and therefore it is important moving forward to understand where continued AMI development will occur within electricity metering. 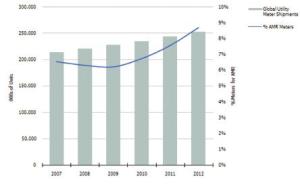 Based on the research the European electricity meter market is estimated to be roughly 20 million meters in 2007, with approximately 15% of these shipments being advanced meters. Of these 3 million AMR/AMI meters shipped into Europe, anywhere from 80-90% were installed in the Nordic region. With small installations and pilot programmes online in Germany, the UK, and Central Europe, along with nationwide rollouts being discussed in France, Spain, and the Netherlands, the question in Europe is where the market is going to shift to next when the Nordic region is fully automated.

A slight decline in the market is anticipated between 2007 and 2009/2010, as no large scale project is set to have a rollout during this time. Forecasting out adoption of AMR/AMI in Europe is a difficult task ahead as slowing global economies, continued credit crunch, and a varied marketplace in Europe create the need for a more rigorous country by country analysis. Starting in July of this year, IMS Research will begin a new study, working with utilities and AMR/AMI providers, to outline the European market for advanced meters moving forward, on a country by country basis.