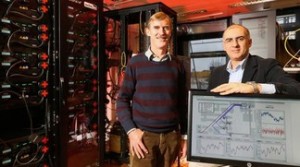 A Swiss Federal Institute of Technology has installed phasor measurement units (PMU) in four of its campus buildings with the aim of studying how the power distribution grid can respond in real-time to changes in the supply of renewable energy.

École Polytechnique Fédérale de Lausanne (EPFL), which offers masters courses in smart grid science and technology, believes the monitoring system for local voltages, phases, amplitudes and frequencies is the first of its kind in terms of its size, complexity and precision.

Developed by associate professor Mario Paolone and full professor Jean-Yves Le Boudec, the system using PMUs can make high-speed measurements and map what is going on in the electrical grid.

Mr Paolone said: “Thanks to an advanced data processing and delivery, we can estimate the entire state of the grid with a latency of maximum 60 milliseconds.”

Paolone said: “In a smart grid, we can buffer these fluctuations through the use of batteries and supercapacitors and by using buildings as virtual storage batteries.

“But for this we need to know exactly what’s going on in the grid. Which is why our model is so useful.”

The project is part of a larger objective by EPFL to develop an ‘operating system-type’ application for smart grids based on innovative control, communication and storage systems.

Paolone said: “Much like the operating system in a computer allows applications to run, our system will enable applications such as intelligent building control or EV car charging to use the smart grid in a very easy way.”