Directive 2006/32/EC of the European Union (EU) on energy end-use efficiency and energy services and its implementation in national law is driving appropriate efforts in the member states. Examples are the Dutch Nuon project to the Dutch Smart Metering Standard (DSMR), the German Open Metering System Specification (OMS-S), and the EU-sponsored OPEN meter project in Spain.

According to legislative requirements, future energy demand is to comprise at least 20% renewable energy. Decentralised feeding of power into the network by various producers is necessary to achieve this amount. This leads to highly complex network operation, in which the utilisation of the networks must be specifically controlled by the so-called smart grid. This task is being solved in cooperatively by globally operating companies that are members of industry associations in the metering, telecommunications and data processing segments.

An initial analysis of the requirement already shows that a single solution for all applications in the European region will not be feasible, as the processes of the market players involved and their solutions differ too widely.

The fast consumption information required by the customer can be provided, for example, via a home display or via a web portal of the utility. The selection of a suitable solution is also influenced by the existing local infrastructure and the associated installation. In a more urban environment, one communication node (data concentrator) per building can be cost effective, but in heavily populated residential areas several homes can communicate over one node. As the transmission medium for the first section, the so-called primary communication, two variants are suitable. The use of radio equipment is usually more cost effective in existing buildings, and a wired system can be considered for new buildings due to the reduced installation costs.

In the telecommunications segment, GPRS has the advantage of availability, but the achievable transmission speeds are lower than those of DSL. The equipment and installation costs for this technology are also very high.

Consideration of other system requirements should also include future developments such as variable tariffs for end consumers, SmartHome or SmartCare. The following requirements result:

These general conditions are governed by mandate M/441 for the standardisation of an open EU architecture. The aim of this mandate is to define a framework of standards for data transmission in a European-wide smart metering system. This results in a competitive situation, especially in terms of liberalisation of measuring point operation. 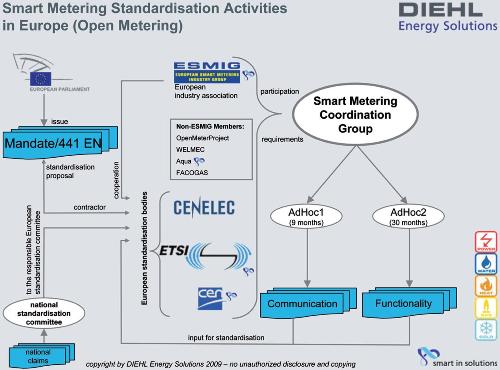 PROCESSING THE MANDATE
The mandate is being processed by the three European standardisation bodies ETSI, CENELEC and CEN. A Smart Metering Coordination Group (SM-CG) has been set up together with representatives of the industry associations Aqua and Fagogaz, and the European cooperation in legal metrology (WELMEC). The system requirements are specified by the OPEN meter project and the European Smart Metering Industry Group (ESMIG). ESMIG comprises manufacturers of all system components:

Two ad hoc working groups are drawing up standards for the parts of the mandate. The first group is to define a solution for communications within 9 months. In view of the above-mentioned requirements, the use of the existing M-Bus wired and wireless standards is preferred and these are to be analysed in terms of the new applications after selection. The technical committees (TC) of the European standardisation bodies concerned will then prepare solutions and implement the standardisation. If none of the existing standards meet the requirements, it may be necessary to develop new standards. However, this should be regarded sceptically for time and quality reasons.

A second ad hoc working group is to define the future functional requirements and map these to the smart metering framework within a period of 30 months. Examples of the new functionalities are remote action, e.g. for power limiting or connecting/ disconnecting decentralised producers, prepaid systems and control of supply quality.

If we turn from Europe to the national efforts, it is worth taking a look at the OMS specification. This takes all the abovementioned requirements into account.

ZVEI, figawa and KNX as members of the German industrial associations have joined forces to form an Open Metering Working Group. The national system requirements are defined by various cross-sector utilities (multi-utilities, including Rheinenergie) and one large electricity utility. The requirements have already been discussed for two years by two teams of experts and the implementation using the OMS specification has been presented. Part 1 (General Part) is concerned with the system architecture at cross-media level. Communication to and from the meter is concentrated in Part 2 (Primary Communication), while Part 3 (Tertiary Communication) comprises the requirements for the data concentrator and its telecommunications. 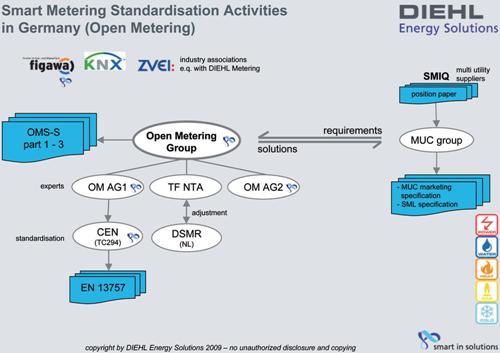 REQUIREMENTS FOR METERS
The requirements for the meters in terms of data quality are specifically defined in Part 2. Transmission techniques are governed by standard EN 13757, “Communication systems for meters and remote reading of meters”. Supplements have also been defined for interoperability and robustness. For example, the transportation of a DLMS data packet over the M-Bus is included. The use of 128-bit AES encryption together with the individual key of each meter ensures the maximum degree of data security currently available. The harmonisation with DMSR has been confirmed by the TFNTA Working Group. The standardisation of these findings has already been started as a work item for TC294 of CEN. A new amendment to EN 13757-3 is expected shortly. It is therefore expected that this work will be taken into consideration in Germany (OMS) and the Netherlands (DSMR), and at European level (M/441).

The quality and importance of the specifications have already been confirmed by a number of companies that are ready to start production of meters developed on this basis. Diehl Metering, for example, presented HYDRUS, an ultrasonic water meter with integrated radio communication according to OMS, in September 2008. A compatible communication module for use on an electronic electricity meter is also available. Here the electricity meter is read via an optical interface, whose extensive parameterisation options enable it to be adapted to any standard electricity meter. The integration of heat and gas is also possible over comparable products. Together with the existing first generation receivers and the connection to established software systems, OMS compatible automatic meter reading of meters for all energy media has been possible subsequently.

The stated activities show that the focus in the globally liberalised energy market of the future is on metrological standardisation. The work on the OMS, which will be reflected in EN 13757, offers a foundation that will be found in almost all smart metering definitions and thus offers the user investment security and future compatibility.

The development of the associated infrastructure creates the opportunity to meet the growing challenges of the energy market. Demanding development work is still necessary before smart metering can be finally introduced. The initial results are apparent from the new systems, which represent the complete chain and thus the integrated process. This offers all concerned the possibility of using the scarce resources in a responsible way.