Rising electricity and gas prices in the UK together with a growing interest in home automation is opening up the field for energy management systems to fight for the UK market, reports Telegraph.co.uk.

Home automation company Nest, run by iPod inventor Tony Fadell, launched its learning thermostat in Britain in early April amid a growing number of similar products on the market.

British Gas is offering a system called Hive, that allows users to remotely control their heating from a mobile device, either tablet, smartphone or laptop.

Other suppliers include UK-based company PassivSystems, which develops software for consumers to manage heating costs, claiming to deliver an average of 23 per cent saving to an annual heating bill; Munich-based  tado° and Honeywell, which also sells smart thermostats for individual radiators.

Products are falling into two technology camps – either user-managed or automated, the UK national newspaper reports.

Hive falls into the first category and lets users set a heating schedule for each day of the week via a mobile app on their iOS or Android device, and then check or adjust the temperature from the app whenever and wherever they want to.

Kass Hussain, director of technology at Hive, said that, when it comes to smart energy management, there is still a low level of product category awareness.

“People aren’t necessarily comfortable with it, and the thing we’ve heard time and time again is, I want to be in control – that word control.

“I want to control my thermostat, not necessarily be controlled by it, or any other high automation device,” he said.

Nest’s Learning Thermostat offers a bit of both by allowing the user to control the heating system remotely but also learns the customers’ habits.

PassivSystems offers a similar mixture of control and automation with its home energy management system, while tado° is the most hands-off.

The tado° algorithm adjusts the temperature automatically, based on the residents’ daily routine, with no user action required.

Reactions to the online story suggest that no one technology has captured the market.

One reader commented that a single thermostat is not the best way to control heating in a whole house. He said: ”The answer surely must be a thermostat in each room, controlling a motorised valve on each radiator, and the thermostat should not be on the valve.” 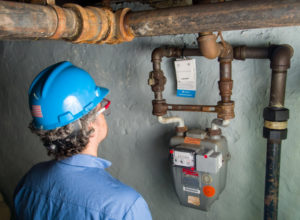