By Alessandro Moscatelli and Domenico Arrigo

By exploiting power grids as the physical medium, power line communication (PLC) is by far the most attractive communication backbone to make networks smarter and stronger.

In particular, STMicroelectronics has pioneered the PLC market since the 1980s, and it has been providing several millions of its most cost effective and integrated state of the art power line transceivers (ST7538 and ST7540) to key meter manufacturers and energy utilities worldwide for large smart metering deployments, such as the ENEL Telegestore and ACEA remote management systems in Italy and the China National Petroleum Corporation sub-metering system in China, as well as other big smart metering systems worldwide, including harsh power grid environments such as South America and Africa.

Along with these field-proven and cost effective solutions, new higher speed PLC technologies offering high communication robustness and future-proof communication services may be required as well in the next years to address new emerging and demanding smart grid applications, while widely accepted open protocols need to be developed and adopted to assure multiple interoperable solutions in order to accelerate wider market penetration.

For these reasons, STMicroelectronics has recently introduced a unique, flexible and scalable PLC system-on-chip (SoC) platform, named STarGRIDTM, which is able to rapidly address all these new evolving smart grid trends.

STARGRIDTM SYSTEM ON CHIP PLATFORM DESCRIPTION
Today’s PLC solutions for the smart metering market are typically based on hardwired multiple chipsets with fixed and often proprietary modulation schemes and communication protocols, or are based on flexible but expensive and power consuming commercial DSPs with separated additional analog front end (AFE), filtering and power line driver ICs.

This is achieved by using an advanced STMicroelectronic’s multi-power silicon technology and an innovative and highly flexible system architecture.

The STarGRIDTM modem core comprises an optimised DSP engine with ROM-based program memory able to manage, depending on the embedded firmware, different modulation schemes and physical layer services including performing correction coding and programmable digital filtering. Specific hardware accelerators may be optionally added to the DSP core in some specific STarGRIDTM implementations to address high performing modulations such as OFDM and specific and demanding PHY layer processing, with reduced impact on overall power consumption. 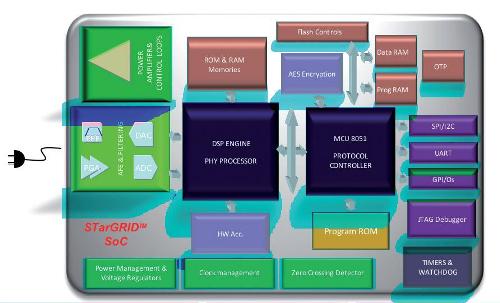 The possibility to use an external optional Flash program memory for the embedded microcontroller and the integrated JTAG debugger gives the STarGRIDTM platform a higher level of flexibility, allowing the system integrator to develop and debug its own customised protocol stack as well as the possibility to upgrade the protocol during the development stage or for the entire product life, if needed.

Furthermore, the STarGRIDTM platform integrates an ultra linear power line amplifier, with specifically designed topology for on board squeeze size and cost easy programmable filtering, which dramatically reduce application bill of material by eliminating big passive magnetics and caps. The power line amplifier is capable of more than 1 Arms output current and 13 V peak to peak output voltage, which makes it able to drive the most critical real loads, by always keeping the compliance with the stringent CENELEC limits. The requirements set by this standard are not only related to conducted emissions, according to EN50065-1, but also to impedance magnitude limits fixed by EN50065-7 and to immunity against conducted interferences as required by EN50065-2-1.

The optional integration of specific functions such as a dedicated hardware accelerator for 128 bit AES data encryption management, a built-in channel quality estimation feature based on signal-to-noise ratio and line impedance measurements, and other critical functions increases system performance and capabilities, while further reducing the total system bill of material and customer development efforts. 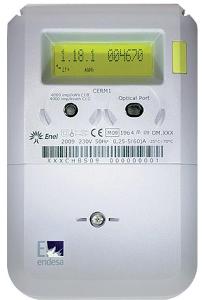 ST7570 SOC STARGRIDTM SOLUTION DESCRIPTION
ST7570 provides a full IEC 61334-5-1 compliant PHY and MAC implementation. The device is compatible with IEC 61334-4-32 LLC layer and can be used for standard DLMS/COSEM metering applications or other command and control systems. In particular ST7570 performs a spread frequency shift keying (S-FSK) modulation. The device is able to estimate the signal-to-noise ratio on both channels and to combine that information for automatic best decoding algorithm adoption.

Carrier frequencies and spacing are programmable in CENELEC A, B and C bands with a maximum baud rate of 2.4 kbps. The communication is always synchronised with the 50 Hz/60 Hz main zero crossing, which is automatically detected by the device itself.

Additional protocol services such as alarm messages management and specific networking features supporting repetition with credits for transmission to distant nodes and intelligent enrolment and routing are also embedded.

ST7580 SOC STARGRIDTM SOLUTION DESCRIPTION
The ST7580 comes with dedicated turnkey firmware implementing a multi mode n-PSK modulation (B-PSK, QPSK, 8- PSK) with advanced channel quality estimation features (as SNR measurements and mains impedance estimation), dual channel operation and convolutional error coding and Viterbi decoding, achieving extremely robust communication in most all noise conditions including AWGN, narrowband interferes and blockers scenarios. The speed is programmable up to 28.8 kbps as well as carrier frequencies and related spacing can be programmed in CENELEC A, B and C bands. The device is also able to perform standard B-FSK modulation for backward compatibility with ST7538 and ST7540 transceivers.

The ST758x family has been chosen by the Enel group to provide the new advanced meter management system which will be used by Endesa to install more than 13 million smart electronic meters in Spain. This new solution will use the Enel PLC protocol stack, named SITRED, which is going to be open to the market, so making it available for all the stakeholders who want to adopt a reliable and proven system on more than 50 million meters worldwide.

ST7590 SOC STARGRIDTM SOLUTION DESCRIPTION
The ST7590 comes with dedicated turnkey firmware implementing PRIME compliant protocol stack. As one of the first founding members of the PRIME project and Alliance led by Iberdrola, STMicroelectronics has been contributing to PRIME specifications since the beginning and ST7590 is the first full PRIME-compliant SoC suitable for large scale industrial implementations.

Each modulation can be used in combination with a convolutional code to increase the communication robustness obtaining a total of six adaptive different transmitting modes. The maximum data rate is 128.6 kbit/s for the uncoded 8PSK mode.

The PRIME MAC has been conceived to offer a plug and play, reconfigurable communication link, which is able to adapt the sub-network topology to react to the time variability of the power line channel.

Though there is no practical limitation on the number of Service Specific CSs, two CSs have been defined and specified: the 4-32 CS, which can be used to interface the IEC 61334-4-32 Data Link Layer and the IPv4 CS, which can be used to interface IPv4 protocol. The ST7590 comes with embedded 4-32 CS and IEC 61334-4-32 data link for standard metering applications, as well as IPv4 stack will be addressed.

The University of Birmingham creates smart campuses with Siemens