By Ivar Thorsteinsson and Jon Vilhjalmsson

The estimated hydroelectric power potential of Iceland which can be used in a cost effective and environmentally friendly manner is between 25 and 30 TWh annually. The geothermal resources are closely associated with the country’s position on the Mid-Atlantic Ridge and the associated volcanic activity. There are over 600 hot water springs in 250 low temperature fields, and 32 active high temperature fields have been identified. The estimated potential for annual production of electricity from geothermal sources lies between 25 and 30 TWh. These two sources add up to approximately 50 TWh per annum in electrical power (including currently utilised resources but excluding those resources unlikely to be developed due to environmental reasons or prohibitive cost).

Iceland has no known resources of crude oil, oil shale, bitumen or natural gas, and the country has not cultivated trees or other biomass for energy purposes, although in earlier centuries charcoal was produced on many farms and fuel wood was prepared from driftwood in some parts of the country. 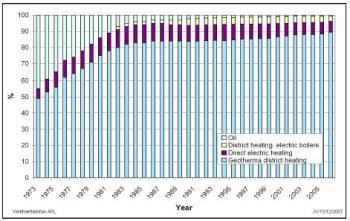 ELECTRIFICATION
Production of electricity in Iceland began in 1899. The first hydroelectric station was brought into use in 1904 when 16 customers were connected to a 9 kW generator located in Hafnarfjordur (close to Reykjavik). In the following years, many small plants were built and by 1934 there were 38 power stations with a total installed capacity of about 5 MW. During the following decades increased electrification and development of the distribution system took place in the urban areas. By 1984, all major power stations were connected to a central grid. By then every region had access to hydroelectric power, and the diesel power stations, for the most part, became reserve units used as backup power in cases of breakdowns in the transmission and distribution systems.

Of the total electricity generation, which amounted to 9.9 TWh in 2006, 34 percent is used by general users (including distribution losses) while 63 percent is used by the energy intensive industries and 3 percent is transmission losses. In 2006 geothermal power plants generated 27 percent of the total and hydro power plants 73 percent. With the construction of a new aluminium smelter, which came into operation in late 2007, it is predicted that by 2009 power intensive industry will use 76 percent of the electricity produced in Iceland. There are now four industrial businesses that are registered as energy intensive users, three aluminium smelters and one ferrosilicon plant. 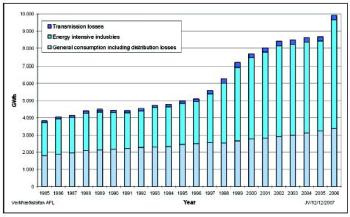 Figure 2 – Electricity consumption in Iceland for the period 1975-2006

LEGISLATION ON ELECTRICAL ENERGY – REGULATORY STRUCTURE
With the adoption of the Electricity Act (No. 65) from 2003 competition in generation and sale of electricity was introduced in Iceland. According to the Act transmission and distribution of electricity will be regulated according to a defined set of rules. The objective of the Electricity Act, which is based on EU Directive No. 96/92, is to encourage an economical electricity system, thereby strengthening Icelandic industry and regional development. In addition, the Act is intended to create a competitive environment for the generation and sale of electricity, foster efficiency and cost effective transmission and distribution of electricity, ensure the security of the electricity system and the interests of its consumers, and promote the utilisation of renewable energy sources.

In accordance with the Electricity Act, Landsnet (IceGrid), a private enterprise, was founded to provide the electrical transmission and system operation services. The owners of Landsnet are Landsvirkjun (National Power Company) with a 64.7 percent share and three other energy utilities with the balance. Landsnet may operate an electricity market on the condition that separate accounts are maintained for the activity but there is no such market in operation today.

There are seven distribution utilities and each has a fixed tariff across its distribution area, except that they can apply to the National Energy Authority for higher tariffs in rural areas, where the distribution costs are higher than in the densely populated areas.

The National Energy Authority (Orkustofnun) is responsible for supervising the transmission and distribution enterprises, and must establish annually an income cap on which these enterprises’ tariffs are based. The Act specifies what can be included as operating expenses, and the Authority must establish the cap in accordance with this while simultaneously making demands for increased rationalisation and cost efficiency. The Act also regulates the potential return on assets required for operations.

The generation, distribution and sale of electricity can be carried out by one enterprise, but separate accounts must be kept for each area of activity. If an enterprise carries out activities unrelated to electricity, the accounting must be kept separate. The National Energy Authority is required to monitor such compliance with legal provisions.

Similarly the distribution companies must meter the electricity delivered or received by the distribution system operator in accordance with the applicable rules. The total number of meters in the distribution networks is around 180,000, with the number varying from 800 meters for the smallest distribution company to over 90,000 for the largest company. The distribution companies are allowed to outsource the metering activity but they are always responsible for the metering data. In accordance with the Act all users with demand greater than 100 kW are provided with meters recording hourly usage data and an automatic remote reading facility. Before the new Act came into force, some of the companies had already installed meters with remote data collection for most of their large users, while others had to install meters to comply with the Act. In general, communication with meters is through the mobile communications system or fixed lines. Meters provided with micro-transmitters have been installed in some areas.

The limit mentioned above for remote meter reading is expected to be lowered in the next few years, as the cost of meters, data transfer (communication links) and the processing of data is constantly falling. Hourly metering covers just less than 40 percent of the total energy supplied to general users.

The transmission and distribution companies decided to establish an independent company, Netorka, for the gathering, processing and clearing of metered data. In April 2006 Netorka put into operation a computer system for handling meter data and for settlements of electricity purchases and losses. All changes in electricity trade, such as changes in the supplying company, are sent to Netorka, which is responsible for sending the information to all parties involved. This centralised system is unique in the world (Figure 3).

CONCLUSION
The Icelandic electricity market has been deregulated and an efficient system for metering and settlements has been installed. In the long term it is likely that all users will have meters with remote reading so that the consumption each month is known rather than estimated. For small users it should be sufficient to have meter data for selected periods but large users will continue to have hourly metered data.