With the UK’s general election still at the early stage of a coalition and what seems like every expert professing a view on cutting government debt, it’s pleasing that concerns over security of supply and its long term and legally binding carbon reduction targets have not been forgotten, but has the vision and who is going to pay for all this… well maybe?

Energy, in all respects, is now high profile. If your memory is short it’s worth just reflecting on what the UK’s outgoing Labour government has set out to do in order to transform the nation’s efficient use of energy. The Low Carbon Transition Plan, published in 2009, aims to cut, by 2020, emissions from fossil fuels in UK homes by 29%; these represent around a quarter of all UK emissions. Subsequently, on 2 March this year, the government built on that goal with its strategy announcement for Household Energy Management: Warm Homes, Greener Homes.

In parallel with this announcement, developments from much earlier enabling legislation from the Energy Bill in 2008 are now beginning to bear fruit. With feed-in tariffs (FITs) becoming effective (April 2010) and a world-first renewable heat incentive from April next year much of the above will be underpinned.

The FIT scheme, sometimes referred to as “clean energy cashback,” is available through licensed UK electricity suppliers. The scheme is intended to encourage the uptake of small-scale low carbon technologies up to 5 MW, through tariff payments made on both generation and export of produced renewable energy.

In this article we explore the customer equity, cost recovery, network and tariff issues the above policy developments present and also the role smart meters could play to help address some of these challenges.

The take-up of low carbon applications, investment in household and community micro-generation and other initiatives to decarbonise our energy use will have a profound impact on the nature and pattern of demand, whilst adding significantly to customer’s energy bills. FITs and the renewable heat incentive (RHI) for example, will all be subsidised by levies on consumer’s energy bills. According to Consumer Focus, levies for a range of various environmental initiatives will eventually add, on average, £250 per year to a typical UK consumer’s gas and electricity bill. British Gas, the largest UK energy supplier, has stated that FITs and the RHI alone will add some 15% to a consumer’s typical gas and electricity bill.

Data from the UK’s Energy Savings Trust (EST) gives an indication of the FIT subsidy involved if one considers a typical cost of 12 pence/kWh paid by the average consumer for daytime energy (Table 1).

Table 1: Tariff levels vary depending on the scale of the installation. The tariff levels shown above apply to installations completed from 15 July 2009 to 31 March 2012 for the lifetime of the tariff. After this date, the rates decrease each year for new entrants into the scheme. All generation and export tariffs will be linked to the Retail Price Index (RPI) which ensures that each year they follow the rate of inflation (Source Energy Savings Trust UK)

The EST gives an example whereby a typical domestic solar electricity system, with a rated size of 2 kWp (assumes 50% of the electricity generated is exported; this figure will vary) could earn around £700 per year from the generation tariff, £25 per year from the export tariff, and £110 per year reduction in current electricity bills. This amounts to a very handsome total tax free saving of around £830 per year and a return on investment of about 9% per annum!

Turning now to the renewable heat incentive, it is designed to provide financial support that encourages individuals, communities and businesses to switch from using fossil fuel for heating, to renewables.

If one replaces an existing fossil fuel heating system (e.g. gas, oil or coal) with a renewable technology one could get paid a set amount each year as an incentive to reduce CO2 emissions.

Eligible technologies are air, water and ground-source heat pumps, solar thermal, biomass boilers, renewable combined heat and power, use of biogas and bio-liquids, and injection of biomethane into the natural gas grid.

The government is not proposing to measure the heat generated from installations. Instead, an estimated figure will be used to work out payments. The estimated figure represents the amount of heat energy needed to warm the home and/or hot water and will vary by house age and size, as well as by technology. It is proposed that payments would be made annually to householders.

An indication of the incentives for small scale installations, i.e. up to 45 kW, is shown in Table 2. 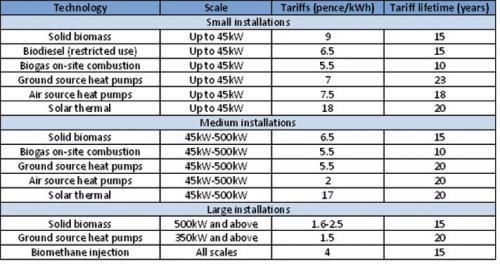 So what does this mean for consumer equity, network/tariff issues and, cost recovery?

CONSUMER EQUITY
In 2004 there were 1.2 million households, in England, in fuel poverty; in 2009 the government’s own estimate indicates that there are now some 4.6 million households. High energy prices have been the biggest driver. According to the Centre for Sustainable Energy, the poorest 20% of society emit 60% less carbon than the richest 20%. The awful truth is that in the UK, excluding Northern Ireland, the poorest also generally pay more for their energy. A prepayment dual fuel consumer could pay up to £280 more than a consumer with an online deal via the internet and paying by direct debit, according to Consumer Focus. Environmental costs are significantly skewed onto electricity bills; this, therefore, exacerbates the inequity if electricity is used for heating. Research from the Centre for Sustainable Energy reveals that 20% of households in the lowest three income deciles use electricity for heating compared to only 8% of the highest three income deciles. Unless it is fully funded where will the poorest find the capital sums required to invest in FITs or the RHI? What is for sure is that they will certainly pay for it through the levies on their energy bills.

NETWORK AND TARIFF ISSUES
Roger Hey from Central Networks, the electricity distribution company for central England, at a conference on 3 February 2010, gave a very compelling perspective and analysis on the impact of renewables on the company’s UK distribution system. Projections indicate that by 2020 Central Networks could have some 150,000 air source (ASH) and 250,000 ground source heat pumps (GSH) connected to its distribution network. Far from flattening the load curve, Central Networks projects that without intervention this type of technology, coupled with electric vehicles, will significantly increase the network capacity requirement and widen the gap between “normal” demand and “peak” demand (Figure 1). The problem will, of course, be more acute on some rural networks where ASHs and GSHs are being targeted to areas without mains gas. Meanwhile, it is unclear in the supplier-led smart meter rollout in the UK how these issues will be dealt with. Who will have the ultimate control over the exit point and will wholesale energy prices win over the capital cost of reinforcing the network? 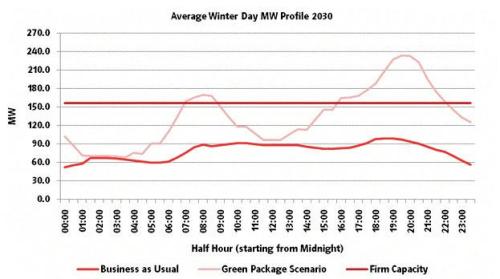 COST RECOVERY
I pose the question, “Should all consumers, therefore, pay equally for carbon abatement measures?” The attribution of these costs and other levies on consumers’ bills to fund decarbonisation of energy production and its end use is increasingly urgent and requires much greater transparency for the consumer. Smart meters have the flexibility for enormous numbers of different tariffs and in-home displays (IHDs) to promulgate the tariff information. If politicians and, in turn, its regulators could opine that differential rates of carbon abatement cost recovery were appropriate, then policy instruments need to be put in place now to enable the smart meter rollout programmes to reflect this.

CONCLUSION
Smart meters, although only part of the journey to a smart grid, demand a clear vision. Consumers will ultimately pay for this investment and will have to live with the consequences of the enduring policies. The first “few miles” will ensure or otherwise consumer confidence. Our political lords and masters must have the clarity of vision on the issues that need to be resolved.

I will finish with some words from Plato: “The beginning is the most important part of the work.”