At present utilities – and especially network operators – are bound by the effects of the EnWG in the fields of metering and measuring. (The EnWG, or Energie-Wirtschafts-Gesetz, is a German Act based on EU law, with the aim of ensuring a consumer-friendly and ecological gas and power supply, active competition, and the long-term efficient and reliable operation of power and gas grids). Initial customer requests for a takeover of the meter make it neces-sary for utilities to position themselves as meter operators/service providers, and to play an active part in the new market for metering and measuring. In view of the decreasing fees for using networks and other sanctions, it is important for network operators to develop alterna-tive possibilities to assure sales volumes within the market.

The liberalisation of measuring has not yet been realised, but is already being discussed at various levels. A survey we conducted shows that a significant amount of participants (62%) think that this liberalisation will be achieved in the medium term, mainly because the political will exists. There is, however, grave insecurity concerning the concrete form and develop-ment of the liberalisation, which makes it necessary for utilities to evaluate the risks. Because the increasing complexity of operational tasks that occurs in the course of liberalisation means large expenditures, for example in reorganising processes, one-fifth of the utilities inter-viewed had already been confronted with enquiries from several sectors – for example from meter producers and service providers or technical firms.

As a reaction, interviewees answered that they either delay accepting offers until the submis-sion of a final draft of a framework contract, or they do not agree to offers at all, or they turn them down because there is no information about the cost-effectiveness of the offer.

The anticipated change in the situation for metering operators and service providers will necessitate internal market protection, as well as the external opening up of new markets as an option for growth. In particular the interviewees identified unbundling, the European Measur-ing Instruments Directive (MID) and the influence of the regulatory authority as the main in-fluences on metering and measuring, and as a result they expect considerable cuts for meter-ing operators. Accordingly such aspects as market and contract constellations will be consid-erably more complex in future, as the EnWG and other regulations affect the organisation, processes, costs and strategies of companies to a significant extent (see figure 1). 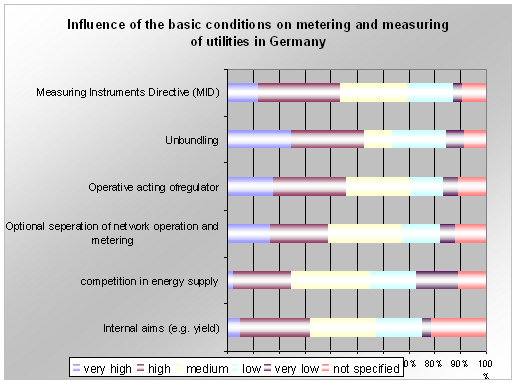 Figure 1: Influence of basic conditions on metering and measuring of utilities in Germany (source: trend:research)

Only a few companies operate ‘actively’ in the market

In future, a basic strategic approach for the various market actors will be to create and realise an appropriate sales strategy in order to successfully generate market share. With regard to products and services in particular, the matter of possible target groups for the respective of-fers has to be discussed. However, the aspect of competition in the market also has particular significance. Utilities must identify the level of possibilities for product differentiation, mean-ing the option of identifying and realising unique selling points. This is being followed by the formulation of products and services specific to target groups as a basis for the development of market presence and cultivation.

At present, interviewees classify key accounts as an especially relevant target group for an of-fer of metering services, whereas only one-fifth of the experts see potential for private cus-tomers (see figure 2). Presumably, special customers from the fields of industry and trade will increasingly ask for metering services and meter takeover in the future. 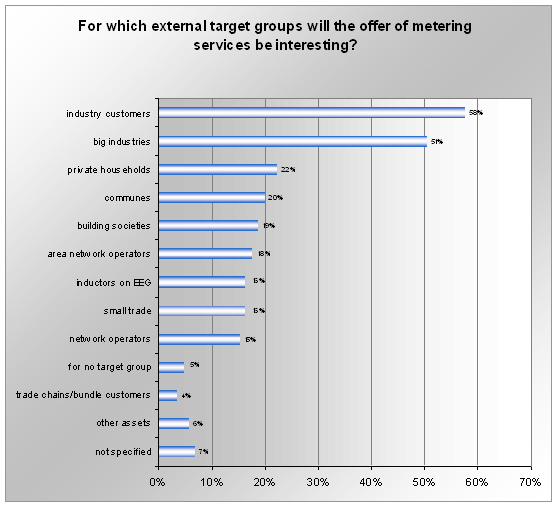 For actors in the market, and especially for meter operators, various strategic options for the future orientation of their organisation should be developed, and these options have to be adapted to the particular situation of the organisation and its goals. Consequently, the ‘active’ strategy is shaped by a significant orientation towards innovation. It is driven by marketing and competition and anticipating competition.

The ‘neutral’ strategy, on the other hand, is based upon the imitation of existing success pat-terns by using existing experiences, while the ‘passive’ strategy involves recourse to estab-lished standards. Small and medium energy suppliers in particular will presumably choose a passive market presence in the long term, especially because of a lack of capacities or because of the notion that no relevant competition will develop in future. The majority of the energy suppliers will await the development of the market and the recommendations of unions and mandates in the short term.

Up to now, only a few companies are effectively ‘active’ and marketing-oriented. Only 14 percent of the interviewees are planning a concrete appearance as metering service providers. Consequently, a marketing-oriented positioning only becomes accepted gradually; companies today focus on an appearance as network operators. Many utilities obviously have not discov-ered the meter as a product yet.

This appraisal also covered the statements of the respondents concerning the meter as a mar-keting instrument and product. Here the expert opinions differ, particularly between network and marketing – 31 percent of the interviewees attach little or no importance to the meter, whereas 23 percent rate its significance as high.

Starting with possible target groups results in different possibilities at the level of products and services for the implementation of metering operation and servicing in a liberalised mar-ket. Thus combinations with other products can be realised, for example in the still-regulated areas for certain network operators, including metering and measuring. The market appear-ance of other network operators with activities outside their own regulated area may also re-sult in fundamentally different aspects such as logistic activities, metering operation on loca-tion (for example by installer companies) or technical handling, meaning the conscious and systematic extraction of sub-processes in metering and measuring as independent products on the market.

In future the offer of the metering operation will presumably be pegged more and more to supply services, and will be marketed with standardised marketing actions. In doing this, en-ergy suppliers will try to maintain their ‘factual’ monopoly of metering operations in their regulated area in the long term.