Energy is hot. Within the next two decades we will experience a transition from conventional fuel-based energy supply (oil and gas) towards an energy system built upon centralised and decentralised renewable sources such as solar and wind; an energy system with new roles, parties and interaction patterns between these parties, including the consumers, who will also become producers of energy, or prosumers.

Energy storage solutions will enter the market (e.g. electric vehicles). All this will have at least a similarly disruptive impact on the utility business as the internet had on the traditional telecommunications business. Eneco, the Netherlands’ third largest energy company, is fully committed to green choices and delivers a wide range of energy services such as the supply of electricity, gas, heat and combined heat-power installations (CHP). The vision and strategy of Eneco is fully focused on the supply of sustainable energy, centralised and decentralised in close cooperation with its customers. Eneco believes that the consumer also will become an energy producer and Eneco has set itself the target of 100% energy supply from renewable sources by 2030. As a consequence Eneco is studying how the upcoming energy transition will impact the existing IT landscape and how to prepare for the future.

ENERGY TRANSITION AS CONTEXT
Focusing on the changing context of the energy sector in Europe, we recognise today unbundling activities, increased market competition and consolidation. In addition, Gartner predicts for the next coming years a transition of control towards the customer: from a demand/supply model (supply of energy follows demand) to a demand/response model (demand follows energy supply); and variable pricing, enabled by smart meters, will influence customers’ energy usage behaviour. Finally, from 2020 onwards the introduction of consumer energy management, including storage and local electricity generation (PV, micro-CHP, wind) is foreseen. In the coming years the energy topic will also rise higher on international political agendas, which might accelerate the energy transition. An increase of climate-related legislation in order to meet Europe’s 20-20-20 targets (20% energy from renewable sources, 20% less CO2 emissions, and 20% energy efficiency by 2020) can be expected.

So the message is that the utility business will change significantly, and that the challenge will be to transform the existing corporate culture to accommodate change. The ability to change will be a key market differentiator.

CHANGING BUSINESS CHARACTERISTICS
The energy transition will change current business characteristics as outlined in Figure 1. For example, with a large number of prosumers, both in the residential and business market, energy will flow bidirectionally and this will have a significant impact on future grid design. 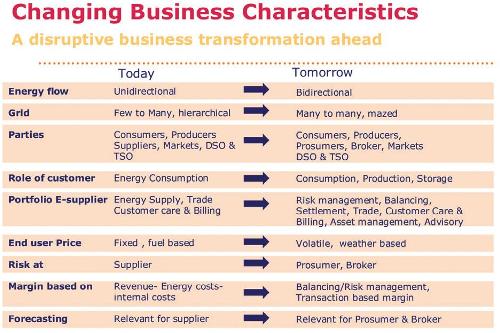 The business model of a utility company also will likely change. Margins will not be based any more on supply of energy (revenue = energy cost – internal cost), but on energy transaction handling and additional services (e.g. risk management). Enduser pricing will be much more volatile since demand will follow supply (wind, solar) and forecasting relevance will shift towards the customer. To summarise, the relation with the customer will change and the portfolio will change. The customer will become part of the energy system, and the portfolio of a traditional utility company will shift towards brokering, transaction and settlement services, supplemented with new services to accommodate the prosumer in the transformation. We will see the end of energy supply as a “cloud service”.

In the market we see already early examples of the changing relation with the customer; the process of increasing consumer participation is already underway. Three examples in which Eneco currently is involved are:

MAINTAINING SYSTEM INTEGRITY
Significant grid feed-in of locally generated and/or stored electricity from variable renewable energy sources in an uncontrolled way leads to the question of how the system operator (SO) in the future will be able to maintain system integrity. In the Netherlands today, Balance Responsibility is restricted to a relatively small number of licensed parties, who carefully forecast, plan, manage actual imbalance, and afterwards allocate and reconcile energy transfers. What will be the impact with millions of active participating prosumers? How will this impact the financial yield of conventional fuel-based (coal, oil) electricity generation? Will the energy transition be a linear or non linear process? How will we be able to manage the transition itself? All these are questions that still need to be answered.

THE CHALLENGES FOR IT
The transition as described above will create serious challenges for IT. The key questions for IT will be how to support energy supply and system integrity in the future business model, how to enable the energy transition, and how to deal with new, yet unknown legislation that certainly will arise. And at the same time serving the current business model and reducing IT costs as usual…

Let’s reflect on the business-supporting role of IT from a value chain perspective (Figure 2). Today the incumbent utility company is generating electricity, delivers energy to the customer and is buying and selling from and to the markets. The unbundled grid operator is responsible for the transport of energy through the networks. The role of the consumer today is merely restricted to consumption (“energy from the cloud”). IT functions solely support that part of the value chain that is comprised by the utility company, typically CRM and billing, trading, energy forecasting, planning, balance management and settlement – today all functions inside an energy company and typically supported by a fragmented application portfolio. These are composed out of own developed applications, best of breed applications (e.g. trading platforms) and best of suite applications (e.g. customer care, billing and enterprise resource planning), and all are glued together with proprietary interfaces in a non service oriented way. Clearly this is not prepared for opening up the energy system! 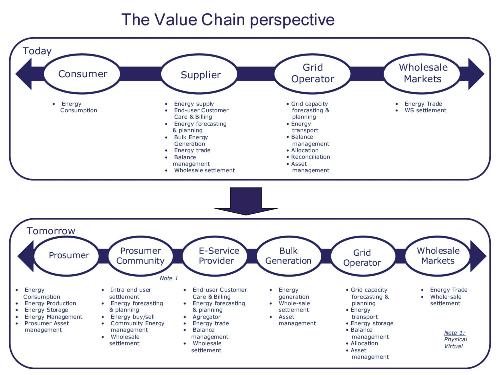 In the future, functions in the value chain are likely to shift towards the prosumer. We also might see new roles and participants in the value chain: the prosumer community, both physical, such as microgrids in the neighbourhood, and virtual, such as closed user groups. Also the difference between energy service provider functions, one focusing on the prosumers and one focusing on bulk generation, may become more visible. This will enable large groups of communities to act as virtual power plant companies (VPCs). This shift of functions across the value chain will require intense information exchange with prosumers and prosumer communities: As said earlier, they will become part of the system.

AN ARCHITECTURAL FRAMEWORK IS NEEDED
The shift of functions on the value chain will have a significant impact on the existing IT landscape of a utility company. Also developments can no longer be controlled solely from an energy company. Many new market initiatives from actors outside the energy sector will emerge (e.g. from consumer electronics, telecommunications, banking, automotive industries). An architectural reference framework and standards will be required to make it work in order to manage overall complexity, ensure future system integrity and security of supply, ensure alignment with market models and legislation, and to form the basis for effective application/services development (with sound ROI and with less vendor lock-in).

Such a framework also will enable innovation, since standardisation enables interoperability and interoperability drives innovation. For example, it should be clear what functions a smart meter in the regulated domain should contain, and what functions should be left to market innovation for consumer energy management. An example of such a reference framework is given in Figure 3, also clearly positioning smart grids.

Thus we should start to model functionality across the value chain and a clear and widely adopted reference model is a fundamental prerequisite for that. 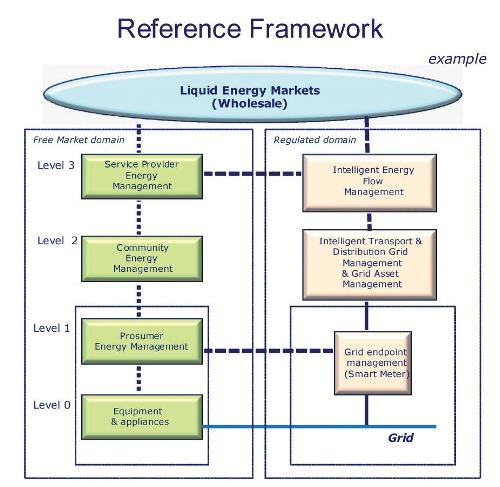 OPPORTUNITIES FOR THE INDUSTRY
The transition will create opportunities for utility companies, for the energy sector as a whole, for new participants and for vendors and suppliers delivering to the sector. Realise again that future application solutions might look very different from those of today. When energy supply will be more real time and transaction based (e.g. the case for charging of electric cars), banks or credit card companies might step in with their expertise on transaction platforms. So utility companies and also the consulting firms and technology vendors are encouraged to think from outside the sector. Cross sector knowledge and opportunities should be leveraged.

Success in the future value chain depends heavily on information exchange with other parties in this value chain. An energy service provider which successfully models and realises the right services will be able, next to own usage, to facilitate the prosumer and prosumer community through these services. This requires a paradigm shift in thinking on the positioning of IT: from cost centre to the heart of the business! “The utility of the future will be an information utility,” according to Gartner (December 2009).

TRANSITION
Where will we be in 10 years from now? What will be the situation with respect to energy prices, technology developments for example on electricity storage and on legislation? It is hard to predict; however it will change and will be very different from today. Putting it in a time perspective and considering the tasks to do (framework, standards, legislation, application development, piloting), then it becomes clear that we should start to work on these topics today, in order to avoid IT getting on the critical path.

AN URGENT NEED FOR JOINT, COHESIVE EUROPEAN STANDARDS INITIATIVES
Investigating activities on architectural frameworks and standards, there is a significant difference in approach and speed between the US and Europe. As a result of President Obama’s Energy Independence and Security Act (2007), the US is investing heavily in initiatives to get the energy sector “smart grid ready”. The US National Institute of Standards and Technology (NIST) was able in 2009 to come up with an initial reference model, with more than 80 standards, 70 gaps identified, and 14 of them prioritised. Aggressive timelines for 2010 also were set.

The situation In Europe is completely different. Although there is relevant EU research under FP 7 (the “Address” Programme) and the European Technology Programme on smart grids, today Europe is not driving the change in a well orchestrated way, from which the whole European Community economically could benefit (since such initiatives will deliver far more European economic offspring than only standards needed for billing of next generation prosumer energy services). This situation should change rapidly to avoid also a possible misfit between future application solutions, based on US models and standards, and the European market situation and legislation. The EU should clearly take its role here.

Recall the success of GSM in telecommunications: it became a success because Europe was able to standardise it in time, and a lot of European-based companies profited from it. In the end, it was globally introduced, even in major US cities.

CONCLUSION – CALL FOR ACTION
To conclude, European regulators and policymakers should take the initiative and enforce a reference model, standards, and alignment with future legislation (e.g. elimination of profile-based allocation). However, the energy sector should not wait and see, but actively push the development of the required architecture and standards, and start to think outside the sector and increase its ability to change, and vendors should engage proactively. It is time for action….