The Akureyri Declaration of the Nordic energy ministers in 2004 pointed out that further development and deeper integration of the national electricity markets was an important strategic target. In addition a truly common Nordic retail market with free choice of supplier was set as a strategic objective by the Organisation of Nordic Energy Regulators (NordREG) in 2005.

A study conducted in 2005 by VTT and SINTEF Energy Research for NordREG uncovered and mapped several differences relating to the collection and handling of metered data among Nordic countries, both at the technical and regulatory levels. It was concluded that these differences may in the future create critical barriers for the establishment of a common Nordic end-user market and thus had to be resolved. NordREG’s report “The integrated Nordic end-user electricity market” identified the establishment of a Nordic Automated Meter Reading (AMR) Forum as an important element in the creation of a common Nordic power market.

IMPLEMENTATION OF AUTOMATED METER READING
Before deregulation, when national electricity markets were dominated by regional electricity monopolies and the electricity tariffs were more or less constant, there were no strong needs for AMR, especially for the small and medium final customers. The deregulation process introduced competition in several segments of the market, and particularly between the electricity generators. Marketbased pricing of electricity in deregulated markets requires complicated and costly settlement procedures, which are necessary to change electricity suppliers and to ensure competition between them. In addition several other arguments justify installation of AMR to all customers, including correct metering of electricity consumption and billing, potential energy savings, frequent metering supporting flexibility in the end-use, etc.

Sweden was the first Nordic country to introduce mandatory requirements for monthly reading of electricity consumption for all final customers from July 2009 and has in practice committed to full-scale implementation of AMR systems. In June 2007 the Norwegian Water Resources and Energy Directorate (NVE) expressed its support for the installation of AMR to all customers in Norway. NVE is currently establishing the functional specifications that will be included in the legal requirements, which are expected to come into force around 2013. In Finland and Denmark several distribution system operators (DSOs) have already voluntarily installed AMR systems for all their customers, while the implementation of mandatory requirements is still under discussion.

LACK OF COMMON STRATEGY AND STANDPOINTS LEADS TO RISK EXPOSURE
There has been no common strategy among the Nordic DSOs relating to the use of data formats for transfer of metered data between final customers and the DSOs. This has led to manifold incompatible proprietor-defined formats in the market and in some cases has led to the operation of several redundant parallel data collection systems, increasing the operation and maintenance costs. Furthermore, the experience has shown that the use of proprietor-defined formats exposes DSOs to unnecessary financial risks and uncertainty, such as possible bankruptcy of the key vendor, who owns the technology and data format. Additionally, proprietor-defined data formats restrict access for third party actors and limit development of innovative products and services that may enhance implementation of AMR.

In order to reduce these risks, several big Nordic DSOs have purchased shares in AMR vendors. This will certainly reduce the risks, but it is natural to expect that it may reduce competition between the vendors and may even encourage development of specific local solutions. The main problem, however, is that this strategy is difficult to enact for the many small and medium size DSOs in the Nordic countries. Only an industrial cooperation between DSOs can be an efficient and long-lasting solution suitable for all the partners.

COOPERATION IMPROVES TECHNICAL EXPERTISE AND REDUCES RISK EXPOSURE
The Nordic countries are very close geographically, have similar climates, and share a common electricity exchange (NordPool) as well as several other characteristics related to the electricity sector. Some companies, such as Finland’s Fortum and Sweden’s Vattenfall, successfully operate in several Nordic countries. Even though the deregulation process path differed slightly from country to country, all four national electricity markets are fully liberalised today and have similar organisational structures in their national electricity markets. The reforms did not include privatisation and left public ownership largely intact. As a result the Nordic countries have more DSOs than any other country. Norway alone, for example, has more than one hundred DSOs, some of them with only a few thousands of metering points. In addition while the total number of network companies has steadily decreased due to mergers and takeovers, this has not occurred as rapidly as was expected some years ago.

This multitude of DSOs is probably the most distinctive feature of the Nordic electricity market, and makes it necessary to emphasise the importance of sharing of experience and the creation of regional cooperation schemes between DSOs. Such cooperation is an important instrument, as it can support procurement, installation and commissioning of AMR systems. Despite the proximity of the markets, Nordic DSOs did not have a regular meeting place or a common systemised knowledge bank, where they could share their experiences related to metering. Previous test implementations of AMR on the large scale uncovered challenges in several areas, including logistics, integration of data systems, data quality, etc.

Swedish companies were pioneers in the establishment of regional cooperation organisations for network companies. The Swedish Meter Cooperation (Svenska Mätsamarbetet, SAMS), which brought together 33 energy companies, and Meter Reading Automated and Secured (MAS), a joint cooperation between nine DSOs in Dalarna region, are the best known examples. The lessons learned in these organisations, both positive and negative, along with other experiences are highly relevant for the rest of the Nordic countries. 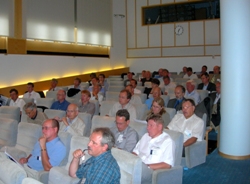 The project is based on the establishment of industrial cooperation in order to encourage cost efficient implementation of AMR solutions in the Nordic countries for the development of a flexible and well functioning electricity market. In 2007-2008 the project is being supported and partially financed by Nordic Energy Research (NER). In order to maintain close contact with the electric industry, the project’s steering group includes representatives from the Norwegian Electricity Industry Association (EBL), Finnish Energy Industries, Swedenergy, the Danish Energy Association and NordREG.

The project organised its first workshop in August 2007 at Vattenfall’s premises in Stockholm. The workshop was attended by almost 60 participants from the electricity industry in the Nordic countries and Europe. During the workshop a round table was arranged to discuss the strengthening of Nordic AMR cooperation and which activities should be prioritised. Based on that discussion the Forum has identified three main initial focus areas:

It is natural to expect that the main interest areas are going to evolve over time, following implementation of AMR in national markets. Probably the most critical question for many companies intending to install AMR systems today is to find an optimal combination between costs (both capital and future operational) and AMR functionality that will meet the future market demands and ensure implementation of new products.

The first workshop had a fairly general approach, intending to identify the main challenges and relevant focus areas for cooperation. The project group is currently working on arrangements for the second workshop, which will be held in Malmö in June 2008. The second workshop will focus on more concrete technical issues relating to the implementation of AMR, based on input from the Forum.

In 2007 the project group studied several alternative models that can be used as a starting point for the organisation of the Forum. In order to enhance cooperation, the Forum invites different types of stakeholders who are involved in the process to participate, including DSOs, retail electricity supply companies (RECs), software and hardware vendors, regulators and consumer organisations. The project to initiate the Nordic AMR Forum has duration and financial support from NER until the end of 2008. Finding organisational and financial models that will secure its sustainable operation in the future is the main challenge for the project today. For more information see the Forum’s webpage www.sintef.no/amrforum