White papers are strategy documents and therefore details of implementation are thin on the ground, but the market is already responding. So will the White Paper accelerate the introduction of smart metering or has the mandate to provide consumer displays undermined the market potential?

STRATEGIES FOR ENERGY SAVING
In the UK, domestic energy consumption represents an estimated 24 percent of the total annual carbon emissions. The government is hoping that direct information on consumption data will achieve reductions in carbon emissions of 0.4 MtC by the year 2010.

To achieve this, the White Paper proposes “requiring energy suppliers to provide free electricity displays and expecting smart electricity and gas meters to be installed within every home over the next decade, all of which will help give households the information they need to save energy.”

This will be achieved by requiring every replacement meter in the UK to come with a real time display, by allowing consumers to directly request a ‘real time energy display’ from energy retailers, and by strongly supporting the introduction of smart meters within the next decade.

MARKET RESPONSE
The UK industry has given the proposal a mixed reception: certainly the Energy Retail Association (ERA) is not impressed. Their response to the White Paper makes it clear that while the industry supports the introduction of interactive smart meters, they believe: “electricity display devices … are a gimmick measure as they do not address the real challenge at hand – they only work for electricity (not gas) and they give time-delayed information (rather than real time). There is also a very real concern over the dangers if they are installed incorrectly and we want to make it clear that the industry will not be liable for this decision.”

Prior to the White Paper, work done by the ERA on the minimum requirements for smart meters set basic standards for displays based on existing non-smart meters and minimum requirements for meter interoperability with a separate consumer display unit. However, in practise the choice of communications technique and data to be tansmitted has been left open. In effect suppliers wish to keep their options open and considering the complexity of the challenge this is not surprising.

Meanwhile, there is no agreement on functionality standards for a simple consumer display unit. The White Paper suggests a minimum level of information – that it must show real time information about electricity consumption – and of accuracy – 95% – but is silent about important details such as the requirements for communications, installation and maintenance, data storage and future proofing. Without any standard, it is hard to see how existing devices could be integrated into future generations of smart meters.

CONSUMER DISPLAY DEVICES – A POSSIBLE STANDARD?
Against this background, we think it’s timely to propose a tentative standard for interoperable consumer display units, for debate with meter and display manufacturers, energy suppliers and consumers. A summary of this can be seen in Figure 1. A well thought out standard will help ease the transition to smart metering for those houses that acquire consumer display units, and give a benchmark for the performance of new smart metering products, at least in their consumer facing functions. However, any such standard will need to be lightweight, to avoid it becoming bogged down in debate between vested interests and to allow some degree of competition between suppliers to the market. 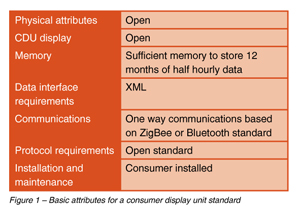 It is our view that the most important attribute of a consumer display unit (CDU) is the attractive display of reliable, easy to understand information. Consequently, much of the cost in the unit will be concentrated in the display, processor and memory. With adequate memory residing in the CDU, the meter will be required to update small packets of information frequently, which reduces difficulty in coordinating the data at two locations. The ERA SSRM project already suggests an XML data format, which means the size of each data packet being moved will be small, and allows the use of a variety of communications technologies. Data being moved will include the load, the cumulative energy used, the time of use and cost of the energy, if available.

Many solutions have been suggested for the communications link between the CDU and the meter, which tends to confuse the issue and add to the risk of redundancy. The proliferation of solutions has been driven by recognition that no one technology can cover all the possible property types and meter locations. However, if CDUs are to be low cost items, they need a low cost solution of the sort already widely used in consumer products, with no ongoing running costs. The two most widely available short range solutions of this sort would be Bluetooth and ZigBee standards, which have the added advantage of being robust against communications outages. These solutions would, however, place limitations on where the CDU can be located and require consumers to take some care in installing their CDU.

In suggesting these constraints, it is assumed that individual manufacturers will want to offer a wide range of data presentations, including bar charts, pie charts, graphs, cost information, comparison of usage over various periods and against national averages, and potentially broken down by appliance. Some of this presentation may well require further research to make it possible, and could form the base of proprietary knowledge to give manufacturers market advantage.

THE ARRIVAL OF SMART METERS – SCENARIOS FOR MARKET ENTRY
This standard is required urgently: the White Paper proposals suggest that from 2008 a minimum of 1.6 million consumer display units will be installed each year as old meters are swapped out and meters fitted to newly built houses. Even if a standard for interoperable consumer display devices were to be achieved by the end of 2008, design and manufacturing lead times suggest that there will be a legacy of devices which are incapable of taking data straight from a smart meter.

Some challenging implications emerge from the installation of unstandardised CDUs:

Even without the potential problem of legacy CDUs there are many challenges associated with the government’s stated aim of full smart metering within the next ten years. The estimated costs of ‘smarting’ electricity meters are significant: between £40 – £75 per meter capital costs plus £25 – £30 installation costs. Adding consumer displays would raise the price by another £20 – £30. A variety of new technologies will assist in bringing these costs down in the longer term, but only if sufficient market volumes exist.

Without additional intervention in the market, the natural tendency will be for suppliers to segment their customers and to introduce meters where they will appear most profitable, rather than wholesale introduction.

A recent major study from Gill Owen and Judith Ward at Warwick Business School (‘Smart meters in Great Britain: the next steps?’) makes the situation clear:

“A major question remains as to whether the government’s energy white paper expectation for smart meters for all domestic customers within ten years can be achieved without additional interventions in the meter market … Uncertainty about what, if anything, the government may or may not mandate, is presently inhibiting even modest smart meter investment.”

They raise three policy options to allow the government to achieve their smart metering goals:

While the authors do not favour any one approach, it is clearly their judgement that intervention of some sort will be necessary to give the market the impetus it needs to achieve the challenging goals of the White Paper.

The Energy White Paper marks a high tide in the interest in smart metering in the UK, as energy retailers recognise the potential business benefits and government champions their use for demand side reduction. The goal of full smart metering in ten years demands further government intervention in the market, although it remains to be seen if the government has undermined its goal by promoting the early introduction of consumer display units. In any event, as the industry struggles to remove barriers to the introduction of smart meters and standardise its requirements, the next six months should prove to be key to the future of smart metering in the UK. Watch this space!