The financial and environmental implications of water shortages and pipe leakages are well known – particularly since these topics have become a prominent global issue. Water is now such a precious commodity that consumers are motivated not to waste a single drop. When a renowned UK Healthcare NHS (National Health Service) Trust implemented a water leakage detection programme at one of its major hospitals, the outcome was so beneficial that they adopted the initiative at all their major sites. 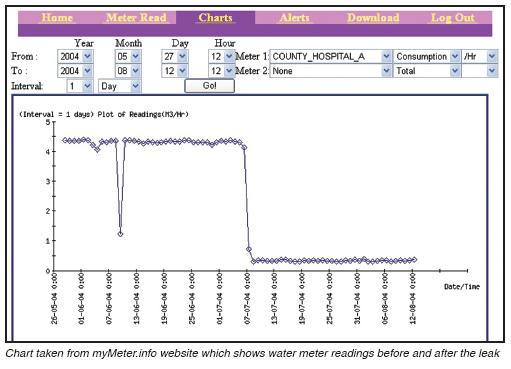 Gwent Healthcare Trust is the second largest trust in Wales; it includes a wide-ranging portfolio of 117 properties. Amongst them is County Hospital, Griffithstown, where local NHS managers had long suspected a water leak. Water consumption at the hospital seemed excessive, particularly when compared to hospitals of a similar size – and with the trust spending £820,000 per annum on water and its treatment, it was certainly too valuable to waste. Wayne Churches, Gwent Healthcare NHS Trust’s Energy Manager, led the project to establish the actual consumption of water and to identify any losses.

In the preliminary search for a system which would accurately measure output and delivery of water, Churches found that there were various issues which would need careful consideration. First the system would, if successful, be implemented by all the sites within the Trust – and as some of these sites were smaller than others, the cost of a sophisticated building energy management system could not be justified. The chosen system, therefore, had to be affordable. The need to be mindful of the consequences of radio transmission in hospital, and the effect this could have upon sensitive medical equipment, also had to be taken into account.

Further research revealed that data collection to establish consumption and cost had been a long-standing problem across all utilities, and that with an overall annual bill of £5,200,000 which represented the Trust’s second highest cost next to staffing, something had to be done to reduce this across the board. Churches was then able to distinguish the most important requirements of the system:

Various systems were explored, but were unsuccessful in meeting the Trust’s basic needs. Systems which used radio signals, for example, were not suitable because of the dangers they could pose to medical equipment. Finally, close links with organisations such as The Carbon Trust and Welsh Health Estates made the energy team aware of a small trial of water loggers which had been installed in a hospital in a separate Welsh Trust. These loggers had proved successful, and thus had the potential to solve Gwent’s problem.

The loggers, which were provided by Qonnectis, used state-of-the-art smart meter reading technology and a web-based machine-to-machine communications solution to allow the end user to fully automate meter reading and data collection, and to access the information via the Internet. This offered the Trust the ability to analyse the data to detect a possible leak at County Hospital – and if the technology proved successful, to install it at additional sites and across other utilities in an effort to minimise consumption and reduce costs. 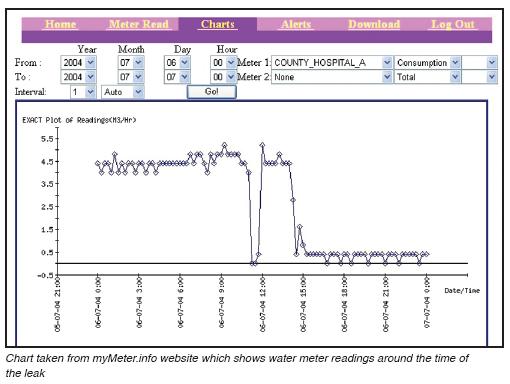 To begin the process, an iStaQ-LG GSM-enabled universal logger was installed next to the site water meter at the County Hospital, which continuously posted water usage trends to the Qonnectis myMeter.info web site. This site was accessed by the hospital engineers, who could read both the meter and actual consumption directly on the PC, either as a table or in a chart format to show trends. An end-of-month reading allowed consumption and cost to be established.

The system matched the hospital’s requirements well, as engineers were able to highlight particular days and look at consumption every half-hour. This is particularly valuable in the early hours of the morning, when leaks can more readily be detected. An alarm can also be set to activate the time when consumption rises above a certain level, that level being set by the engineering staff.

When Griffithstown County Hospital engineer John Jukes analysed the results on the web site, he discovered that there was a high level of water consumption during the early hours of the morning – a period when water demand should have been low. After further investigation, it became apparent that 4 cubic metres per hour was escaping through a pipe leak. Trial holes were excavated at several positions, and once the leak had been located and repaired, water consumption dropped from just under 4.5 cu.m/hr to around 0.3 cu.m/hr. This level has been maintained ever since.

The initial savings at County Hospital speak for themselves, with recovery for the first year at £132,000 including £66,000 in sewerage rebates, and ongoing savings of £66,000 per annum. Financial savings have produced a ‘Spend to Save’ fund for the trust – a first for the NHS in Wales.

Some of the money has been used to finance a draught-proofing programme, which helped to repair the 50-year-old windows on six floors at the hospital. The insulation of the windows means that the wards are warmer, the heating can be lowered, and energy can be saved. As Churches commented: “Savings have generated savings”. The fund has also financed further water loggers throughout the Trust, with all its sites now using the smart metering technology.

Water and energy users operating the myMeter.info web-based metering services have benefited from being able to analyse and identify abnormal utility consumption, correct excessive usage or leakage, and provide daily reporting to facilities management. Energy and water are becoming a major operating expense in most public and private sector organisations, as a result of the recent price increases in these commodities, and in most cases the payback period after deploying this utility consumption monitoring and analysis programme is less than two years.

In the case of Griffithstown, payback was less than one month, with immediate positive cash flow benefit from the second month onwards in reduced water charges.

The trust has now deployed the Internet-enabled utility metering technology at all of its major sites. Engineers have been able to set alarm levels for excessive consumption, and the system is set up to police itself by e-mailing exception reporting. This allows the Trust to monitor consumption, and even to target problems such as leaks, before the water companies themselves are alerted.

Water loggers have been adopted throughout Wales as a best practice, and are now promoted by The Carbon Trust, Welsh Health Estates and the Welsh Assembly. It has been proved that they do more than reduce costs – they can reduce the quantity of delivered water and so help to save finite water resources. They also reduce the need for treatment (chemicals and pumping); reduce effluent to be treated; and finally reduce demand on the environment.

Wayne Churches says of the initiative: “The water loggers have fulfilled all our requirements, and the results are beyond our expectations. From our perspective the loggers are virtually ‘fit and forget’ – the system is sophisticated, and combined with the myMeter.info website we have a highly effective tool. In reducing our water charges we have been able to finance further energy saving enterprises, which can only be seen as a positive for both the Trust and the environment. Many Trusts will see this as a solution to their metering needs, and I predict that our experience will be readily replicated.”