The European electricity market went through a significant transformation during the 1990s. It transformed from a monopoly structure to a structurally unbundled market with the related changes to company configurations. Although this transformation started in the United Kingdom it has been adopted, with country specific variations, across Europe. In 1996, the European Parliament and Council issued the Internal Electricity Market Directive 96/92/EC that set goals for a gradual opening of national electricity markets and rules for transmission access in the 15 member states at that time.

In the past five years there has been a major policy shift from keeping the electricity price as low as possible in a free and competitive market to reducing carbon emissions. This shift has also resulted in decisions to look at the deployment of smart meters to help customers understand when they use electricity and to help them plan savings. Today, smart metering and smart grid initiatives are forcing another major transformation in the utility industry. Many utilities are rethinking their business models and business processes as a result of the shift in the way energy is generated, delivered and consumed.

The state of the regulation and implementation of smart metering varies across Europe on a country by country basis. This results in wide a difference as to which is leading the smart meters rollout – the government or the industry. The variance leads to different players taking the initiative – regulatory pull to utilities push. Two recent European directives, one on Energy End-use Efficiency and Energy Services (ESD) and another on Measuring Instruments Directive (MID), stress the importance of installing metering and billing systems that allow consumers to regulate and manage their consumption.

The EU directive on Energy End-use Efficiency and Energy Services obligates the EU countries to make national energy efficiency action plans. The plans shall describe how the countries will realise a 9% reduction in final energy consumption compared with business as usual until 2016.

The EU directive on Measuring Instruments aims at creating a single market for measuring instruments across the EU. The fundamental principle being that meters which receive a MID approval can be used in any other EU country irrespective of where in the EU that approval was granted. The MID covers 10 instrument types including gas, electricity and water meters. 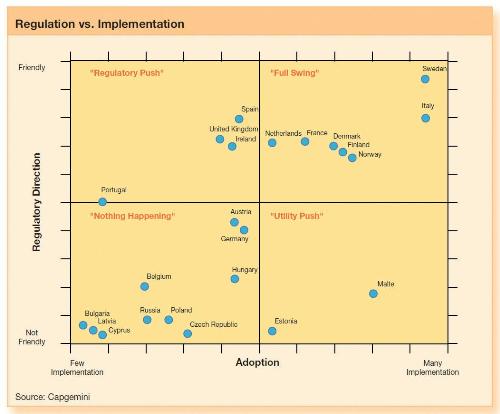 The countries fall into four categories as shown on the graph

The European Smart Metering Industry Group (ESMIG) believes that only through the widespread deployment of smart metering will the European Union be able to meet its 20/20/20 goals by 2020. Based on current and future projects, Capgemini believes that by 2012 between 25 and 40% of homes in Europe will be equipped with smart meters, compared with 6% currently. One of the main challenges to the fast-track implementation of smart meters is the lack of standards for a common architecture and interoperability of the various communication technologies. This has been compounded by the large deployment of proprietary technologies in several regions. But the landscape is changing fast. Currently there are more than 30 groups around the world working on the issues of standards and interoperability.

In Europe the International Energy Agency has set up more than a dozen tasks around standards and interoperability for smart meters and demand management. Ibedrola, together with several metering vendors, is working on a set of open standards based around technology they have developed. EDF has a set of standards for interoperability and the Netherlands will release a set in 2009. These different initiatives are promoting the transformation of the power grid into a smart grid complete with the latest open standards technologies.

Across the European Union, countries are actively moving toward advanced metering systems both as they look for ways to reduce their costs while increasing service quality and in response to various European Union energy-related directives. The following table summarises the state of the regulation and implementation for all of the European Union counties and in addition Norway, Switzerland, and selected post Soviet Union countries: 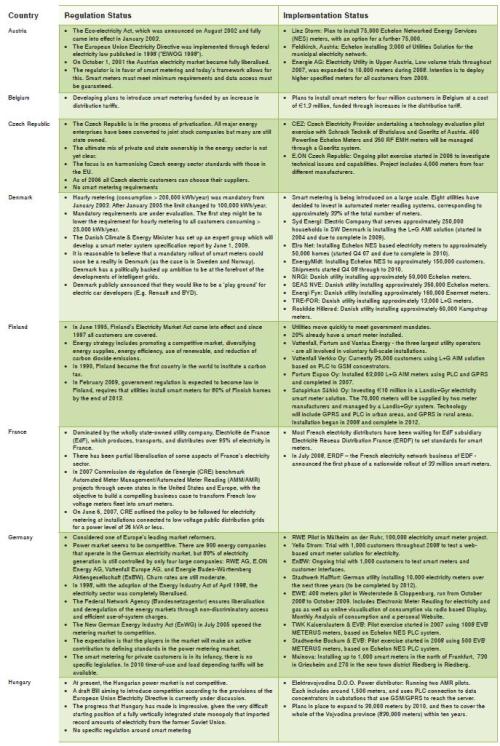 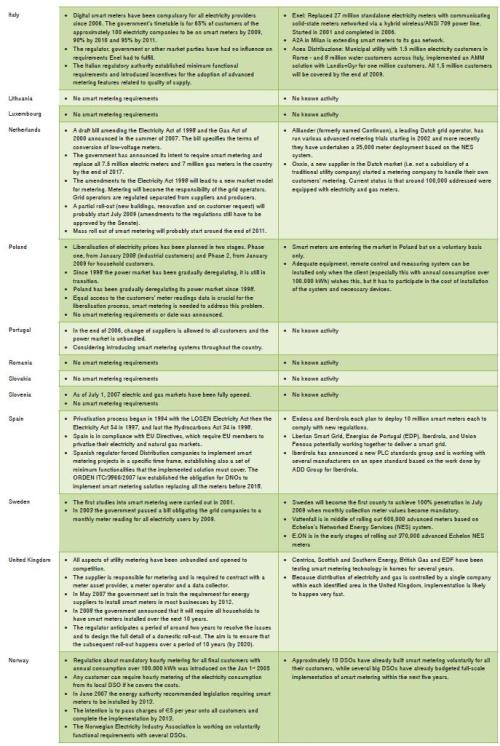 To make the process less subjective we created criteria for the regulatory direction.

SUMMARY
Many countries are at a different stage of smart metering deployment for residential electricity customers. Italy was the first to adopt the technology as Enel deployed more than 27 million PLC meters in the first half of this decade. By 2011, all 36 million Italian electricity customers will be covered by smart metering. Enel was able to justify this deployment without regulatory support – most savings where obtained by the ability to perform various functions remotely, instead of having a service technician visit the customer site, and respond more effectively to customers. Enel estimates that it will make 6 million fewer field visits each year and respond to 98 percent of customer requests within 24 hours. In addition, the system has provided improved network planning and load balancing, while increasing fraud detection. Sweden however became the first county to achieve 100% penetration in July 2009 when monthly collection meter values became mandatory. Currently 71 out of 164 DNOs are reported to be done with the deployment. While the requirement is to deploy equipment for monthly reading, a few large DNOs are actually going beyond that.

Sweden’s mandate is accelerating the deployments in Denmark, Finland and Norway, where installations are steadily growing. Energy conservation is driving similar reform in the Netherlands, which legislated smart metering deployment in mid-2007. Austria and Portugal – which have concluded that Smart Metering will increase profitability – are considering introducing smart metering systems throughout the country as well.

Lately the focus is shifting to France and Spain where EDF, Endesa and Iberdrola have announced massive projects covering more than 50 million metering points. In July 2008 ERDF, the French electricity network business of EDF, announced the first phase of a nationwide rollout of 33 million smart meters. Endesa and Iberdrola each plan to deploy 10 million smart meters each to comply with new regulations in Spain. The Western Europe market is moving slower, but energy end-use efficiency is growing.

One question that remains in the balance is what is the minimum functionality that will be required to support the energy efficiency initiatives and the carbon reduction goals? The equipment already deployed varies widely in capabilities and the supporting communications infrastructure also varies widely. Additional value may be driven by operational uses of the information, but that increases the functionality requirements and the need for communications bandwidth and low latency networks to more the data to a central location.

If Europe is to meet its 20-20-20 targets (increasing energy efficiency and share of renewable energy by 20% and reducing greenhouse gas emissions by 20%) within 12 years, it must modernise and liberalise an ageing electricity grid, create economies of scale for renewable energy and promote consumer efficiency. On average deployment of smart meters from initial tender to operation is seven years and everyone needs to keep this in mind when considering timelines for rolling out meters. Smart grid can take up to 20 years to rollout and only one utility globally – Tokyo Electric Power – has completed a rollout of smart grid. If both of these efforts are important to national, European and global goals, we will need the support of the governments, the industry players and equipment vendors to do it right.

Acknowledgments
This point of view is based on the vast experience and knowledge of the global network of Capgemini. The author wishes to especially thank Doug Housman, Michael Trampert, Marius Ostmoe, Trygve Skjotskift, Timo Graf, Hans Vrinds, Oscar Barrero Gil, Oskar Almen, and Jagtar Basi for their valuable input based on their specific country’s experience.