Water heating is usually the second biggest energy expense for a homeowner. However, the water heater is often the “forgotten appliance” for many utilities. This article summarises the approach taken by two utilities, Portland General Electric (PGE) and Georgia Power, to promote energy efficient water heating through early replacement programmes.

“PGE had not talked about water heaters in 10 years or about energy efficiency and lowering the total cost of providing hot water for the family. We had not talked about the importance of turning down the water heater 10 degrees. We did not have a purchasing guide for our customers. This is an electric appliance that is the second biggest end-use in the household and we hadn’t said anything about it, so we needed to educate our customers,” explained Roch Naleway, energy efficiency marketing specialist at PGE.

To address this need, Naleway worked with Rheem/Marathon Water Heaters and Roto-Rooter Plumbing in Portland, Oregon. Together, they developed a limited offer for PGE customers in which customers could receive a 50 gallon electric water heater installed by Roto-Rooter for the special net price of $765. The Energy Trust of Oregon, which administers Oregon’s investorowned utility energy efficiency programmes, also played an integral role in the development of a rebate and programme promotion.

Georgia Power serves 2.25 million customers throughout Georgia, and is the largest of four electric utilities that make up Southern Company.

“Georgia Power was losing water heater market share and to combat that they needed to find an efficient and trouble free water Water heating is usually the second biggest energy expense for a homeowner. However, the water heater is often the “forgotten appliance” for many utilities. This article summarises the approach taken by two utilities, Portland General Electric (PGE) and Georgia Power, to promote energy efficient water heating through early replacement programmes. heater. Marathon has been working with Georgia Power for more than 10 years to get them interested in starting a water heater programme,” explained Bob Muller, Eastern sales representative for Marathon/Rheem Water Heaters.

“Water heating is good load for the utility,” Mills said, “and through gas conversions the customers could save money. So promoting electric water heaters was in the best interest of both the utility and the customer.”

DESIGN STRATEGY
The goal of both programmes was to educate customers about the importance of selecting an energy efficient water heater before they actually needed to replace it. As Naleway explains, “Usually this is an emergency replacement ‘panic’ purchase and there is little time for decision making, so we wanted our customers to make a different choice, not just a price shopping decision.”

Moreover, most customers are not familiar with making this type of purchase. “This is a peculiar market because customers don’t know about warranty issues or energy. Because this is an infrequent purchase, they don’t know what to look for. There are a wide range of water heater products and retail prices can exceed $850 installed.”

The promotional philosophy was to provide “preventative medicine” and make this purchase much easier and transparent for PGE customers. “We wanted to minimise the hurdles for customers,” Naleway said.

Naleway also conducted some market research about water heater purchases in PGE’s service territory and realised that there were several challenges associated with trying to educate residential customers.

“We spoke with a plumber and learned that about 50% of water heater installations were self installed and purchased at hardware/home centres. So we realised we only had one shot at the customer every six to ten years or so. Most water heaters are sold as commodities and if we don’t specify what to look for, the customers go for cheapest option. But that is not necessary the best one,” Naleway said.

ENERGY AND NON-ENERGY BENEFITS
Another strategy used by both utilities was to promote both the energy and non-energy (green) benefits of using an energy efficient technology. This approach was especially successful for Georgia Power, which developed a memorable advertising campaign promoting the long life of these water heaters.

The durability of the Marathon water heaters was another selling point to the multi-family property managers, Mills added. 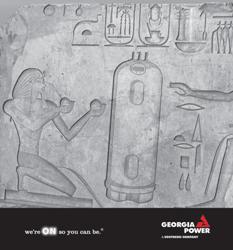 IMPLEMENTATION TACTICS
PGE’s four-month programme was launched on 1 January 2008 and ran though the end of April.

“Georgia Power also provided the forms electronically on their website, so local plumbers and contractors could download all the forms they needed and provide customers with a water heater wherever they were,” Muller added.

The website also provided customers with helpful information about Georgia Power’s Marathon programme, including a statewide map of recommended installers, an interactive water heater graphic illustrating all the benefits of the product, numerous forms and fact sheets, and satisfied customer testimonials.

Georgia Power offers customers a $525 rebate to switch from an existing natural gas water heater to a Marathon water heater. However, the actual costs for this conversion may be higher depending on the extent of the electrical wiring required.

PROGRAMME ALLIES
Both programmes were successful because they relied on strong partnerships established within their communities that included the contractor base, distributors, wholesalers, and other key programme allies.

PGE built a strong relationship between the utility, the Energy Trust of Oregon, Marathon, Roto-Rooter, and an electric utility focused wholesaler, General Pacific, which supplied the Marathon water heaters.

Role of Roto-Rooter
Roto-Rooter, a nationwide plumbing firm, was integral to the overall success for both utility programmes. Marathon had established contacts at the national level with Roto-Rooter that were invaluable as Naleway started to set up the PGE programme. The local franchise owner was willing to negotiate a “flat rate” installation fee that would cover about 95% of the water heater installation jobs. This allowed the programme to be marketed consistently to all PGE customers.

“We asked Roto-Rooter to be a partner because we needed to find someone who could handle the whole service territory,” Naleway said. “It was difficult to find plumbers who were willing to participate. So we worked with a local franchise of Roto-Rooter who understood the market. It is difficult to coordinate with a lot of different plumbers.”

Georgia Power also worked with local plumbers as well as with the local Roto-Rooter franchise. As Mills explained, “Roto-Rooter was big enough to handle the metro Atlanta area and it committed to a standard installation cost for the customer.”

Roto-Rooter also made sure that the plumbers were qualified and the company hired an electrician to help install the wiring for the conversion, making the installation even easier and more cost effective. Georgia Power’s installation network now includes more than 20 qualified plumbers across the state.

Role of the Energy
Trust of Oregon The Energy Trust of Oregon, which administers energy efficiency programmes on behalf of Oregon investor-owned utilities, also played a key role in the overall success of PGE’s programme. Energy Trust staff provided analysis support that allowed them to provide an incentive to further lower the cost of these water heaters.

“We had a big planning session with them and they came back with a $75 incentive for the programme,” Naleway said.

As a way to remain “vendor neutral,” Diane Ferington, senior residential manager for the Energy Trust, added that the $75 rebate is available for any customer who purchases a water heater with a 20 year life that has the same efficiency level as the Marathon product.

PGE’s success with this promotion also increased contractor interest and spurred several others in Oregon to develop their own water heater programmes. “The Energy Trust set up a special promotions page on its website as a way to allow other contractors to launch their own promotional offers across a variety of energy efficiency measures. We required these offers to provide an additional value to the customer beyond the Energy Trust incentives,” Ferington added.

She said this programme provided an opportunity for the Energy Trust to reconsider the importance of promoting both electric and gas water heaters. As a result of PGE’s promotion, the Energy Trust modified its programme requirements to allow point-of-purchase incentives at retail and wholesale locations as a way to reach out to those customers who prefer to self install water heaters.

Role of Gresco
Georgia Power had the additional challenge of trying to serve both metropolitan areas, like Atlanta, as well as more rural areas in the state. The utility was able to develop a successful contractor programme by developing relationships with both a plumbing franchise as well as a wholesaler, Gresco, which serves the rural markets.

The Marathon team tapped into its distribution network owned by electric utility cooperatives. “We worked with the distributor that serves the electric rural cooperatives throughout the southeast. All in all, it was a good deal for volume and saved money in distribution costs,” said Mills.

PROGRAMME RESULTS PGE
During the four-month period, more than 300 Marathon water heaters were installed in PGE customer homes. Since this was a new promotion, there was no way to gauge success.

“We thought 100 installations would be great so we exceeded our expectations, and we will be doing it again next year,” Naleway said.

This programme was so successful because PGE had integrated it into their overall energy efficiency strategy and included it as part of the company’s 12 month plan. PGE had set aside funds to promote energy efficiency during the “winter heating season” and that promotion, combined with the tax incentives and rebates, contributed to the programme’s success.

Moreover, the market has started to transform. Since the programme, inventory levels of Marathon water heaters have increased among non-participating contractors directly as a result.

LESSONS LEARNED
Through these programmes, both utilities learned the importance of collaborating with key trade allies. Both utilities worked with their partners to create an easily understandable programme that communicated effectively to their customers. This was enhanced through a strong relationship among Roto-Rooter, wholesalers, and other key allies such as the Energy Trust of Oregon.

These utilities also learned the following key lessons that could be applied to other utilities considering an effective strategy to promote energy efficient products, such as water heaters:

“PGE promoted the Marathon 800 number so customers could be directed to trained customer service representatives at Marathon. These customer service representatives were also cross-trained on the PGE programme, so they could answer general as well as technical questions,” Richards said. “We also directed consumers to our website where they could view a ‘factory tour’ video showing how the water heater is produced.”