Demand response has an important role to play in both the wholesale and retail electricity markets in the US – but advanced metering and the other technologies needed to support significant demand response deployment as yet have little market penetration.

These are among the main conclusions of the Federal Energy Regulatory Commission’s (FERC) Staff Report ‘Assessment of Demand Response and Advanced Metering’, prepared as a requirement of the Energy Policy Act of 2005 (EPAct 2005) to review these and other demand response issues following the enactment of the Act. “The fact that we were specifically asked by Congress to review advanced metering is recognition of its importance in demand response,” says FERC economist David Kathan, who led the team that prepared the report. “And we also aimed to provide information that would be useful for discussions at the state level on advanced metering.”

For the purpose of the study demand response was defined as: “Changes in electric usage by end-use customers from their normal consumption patterns in response to changes in the price of electricity over time, or to incentive payments designed to induce lower electricity use at times of high wholesale market prices or when system reliability is jeopardised.” 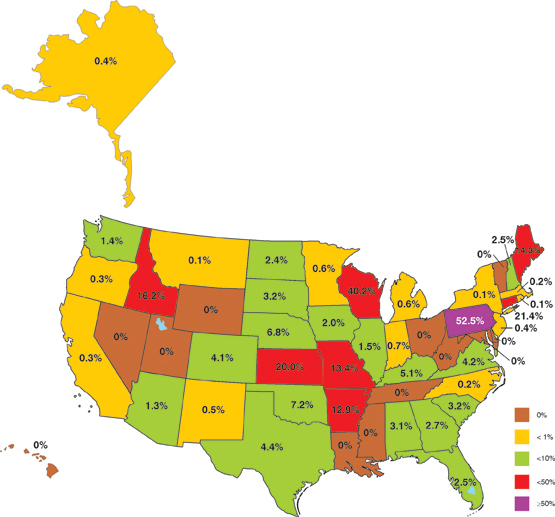 The study, which was based on a survey of 3,365 organisations across the US representing all aspects of its electricity industry, found that demand response is so far not widespread, with only about 200 entities offering programmes to only 5% of the customer base. The most common programmes are direct load control, interruptible/ curtailable programmes, and time-of-use rates.

These existing programmes provide a total potential demand response resource contribution estimated at about 37,500 MW, with the largest contributions in most regions from the wholesale and industrial sectors. This corresponds to a potential (relative to summer peak demand) between 3% to 7% in most regions, except in the Midwest (the North American Electric Reliability Council’s Midwest Reliability Organisation region) where it is up to 20%.

The study found that the penetration of advanced metering infrastructure (AMI) is 5.9% across the US, ranging from zero deployment in 11 states to the highest of almost 53% in Pennsylvania (Figure 1) – somewhat less than earlier estimates that had put the penetration at closer to 10%. “In this context advanced metering is a system that records consumption at least hourly and retrieves these reads at least daily,” says Kathan. However, when the figures are broken down they reveal some interesting facts.

First there are regional variations, with the greatest penetration, 14% and above, in the NERC’s ReliabilityFirst Corporation and Southwest Power Pool regions (the Mid- Atlantic and portions of the Midwest and the Midsouth respectively). All the other regions have lower than average penetration, as low as 1% in the Western Electricity Coordinating Council region. Second a breakdown by customer class shows that the penetration estimates for the primary customer classes (residential, commercial and industrial) are relatively close to the national average, whereas the highest penetration rate (8%) is associated with transportation customers. 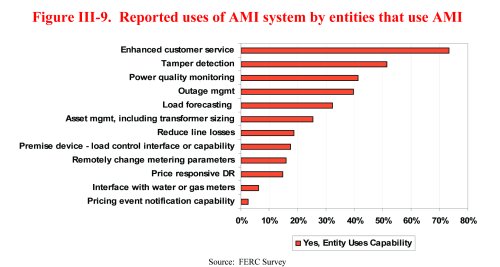 Third there also is a variation by type of company, with cooperatives having the greatest level of penetration at 12.9%, while investor-owned utilities have a penetration of 5.7% and municipalities 1.3%. The FERC report did not examine the basis for these variation, but Kathan suggests that “some utilities have identified the value and benefits of AMI, and also that there are regulatory differences between states. “However,” he adds, “it is noteworthy to see that the rural electric cooperatives as a group have the highest penetration and clearly the meter reading benefits and advantages of AMI are more obvious for these entities than for the urban utilities.”

Respondents were also asked which of the possible functions of AMI systems they used, and the most common feature, reported by more than 70%, was ‘enhanced customer service. Conversely less than 10% reported it as an ‘interface with water or gas meters’ or the ‘pricing event notification capability’ (Figure 2).

Based on comments from interested parties as well as a wider review of demand response experiences the study identified several regulatory barriers to improved customer participation in demand response, peak reduction and critical peak pricing programmes. Key among these is the ‘disconnect’ between retail pricing and wholesale markets, with retail rates for most customers fixed while wholesale prices fluctuate. Placing even a small percentage of customers on tariffs based on marginal production costs would allow more efficient allocation of resources.

Another is the need for regulatory incentives, such as rate decoupling, for utilities to support demand response, since a reduction in customer demand through such a programme would reduce utility revenue. Yet another is the cost recovery of, and incentives for, enabling technologies. Utilities are reluctant to undertake investments in technologies such as AMI unless the business case and regulatory support is sufficiently positive to justify the outlay, and while such investments may require an increase in rates it is uncertain whether and how the regulators would allow these costs to be recovered.

Underlying this is the need for additional research on the cost effectiveness and measurement of reductions from demand response, with consensus required on the appropriate costs and benefits to be measured. There are also barriers at state level as well as in certain wholesale and retail market designs. Several states have laws that restrict the ability of regulators to implement critical peak pricing and other forms of time-based rates, and for example the standard lengthy wholesale settlement periods utilised in ISO/RTO markets delays payment to participating retail customers.

“The staff study shows that demand response deserves serious attention,” says Kathan. “And while demand response is possible without advanced metering the study found that AMI is a key enabling technology in that it provides the capability to observe and manage time-based electric usage, both from the utilities’ and customers’ perspectives,” he adds. “In essence it allows a broader set of demand response programmes to be offered.” Kathan says that a key challenge going forward is to “develop a consistent framework for measuring all of the costs and benefits of advanced metering.”

“This is crucial when a utility goes to the regulator for approval for AMI, and additional work needs to be done on this.” Another challenge Kathan cites pertains to the rapid pace of technology change, commenting that utilities may be waiting to see the direction in which the technology evolves. Coupled with this is the need to establish what and how usage information is provided to customers, including for example how customer display devices are incorporated into AMI, and the need to address the interoperability and standards issues.

“Each of these points raises a whole host of issues, both at the utility, state and national level,” Kathan says. “There clearly is a need to look at removing the regulatory barriers to increased levels of demand response. To address these barriers, FERC staff has recommended that the FERC and the states work cooperatively to find the solutions.