Automation of metering that provides an increase in the amount of data collected from metering devices is not a new topic. During the early adoption phase of automated meter reading technology, readings were collected once per month through an automated means. This monthly read was not likely to put strain on the utility systems. They were accustomed to a monthly reading and early deployments simply provided an automated means to collect the monthly reading. As technology advanced and daily collection of data became commonplace, there was evidence that there would be an impact on utility systems.

For example, many billing systems were set up to only handle one meter reading per month. The influx of thirty readings per month for each residential customer creates a need to address what to do with the data. Utilities realise the operational benefits of having daily data.

Simply supplying a utility customer with a usage-by-day graph provides a tool to discuss customer specific usage concerns and facilitates customer specific marketing programmes (Figure 1). It is accepted that the data delivers value to the utility, and needs to be integrated into systems and stored for some period of time. As the industry shifts to technology that provides more advanced features and is capable of delivering hourly readings for residential consumers, the amount of data that must be managed explodes and requires a utility to manage the collection and storage more astutely. In addition, as utilities further explore ways to exploit the value of the data collected in other aspects of the business, integrating the data throughout multiple utility systems is the norm.

This phenomenon has led to an increase in activity by both utilities and vendors in something coined ‘meter data management’ (MDM). In simplest terms, MDM systems consist of computer hardware and software that receives and manages meter data, including such functions as data validation, storage, archiving, and interfaces to utility business systems. CIS vendors have traditionally provided some of the functionality of MDM as part of a CIS system, including framing billing determinants from interval data and validation, editing, and estimation.

Advanced metering vendors also perform some MDM functions in their head-end software, such as filtering of outage messages and providing customer ready reports and graphs. However, these systems may not include all of the functionality needed to qualify as a true MDM system. UtiliPoint maintains four key elements must be present for the product to be called MDM: 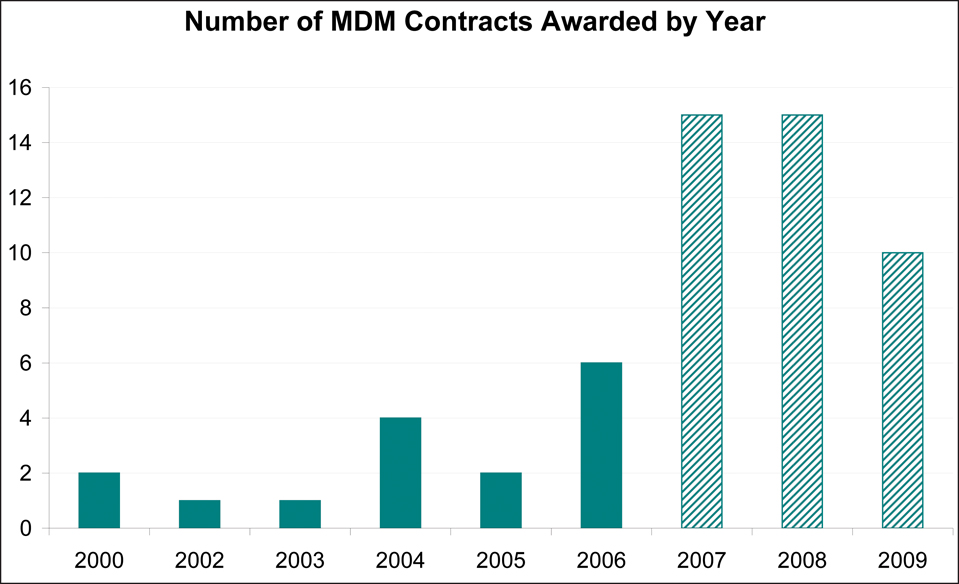 It is imperative that an MDM system be agnostic to the multiple collection systems that bring the data back. This ability to operate as a single repository for meter data of all types, scale to support large volumes of data, and interface easily with legacy utility systems are the essence of an MDM system’s value.

If these basic requirements are not met, it is not true meter data management. Several industry trends have increased the interest in MDM systems:

There are several large utilities that have deployed advanced metering systems and are just now beginning to search for the right MDM system. Others have indicated that they are waiting to install widespread advanced metering until they select and implement an MDM system and the necessary interfaces between utility applications. Those in the later camp argue that to actually realise benefits called out in business cases, such as outage detection, interfaces between systems must exist.

By implementing an MDM system first, or early into the advanced metering programme, efficiencies are realised more quickly. While there are still many questions and lessons to be learned regarding the selection, implementation and use of MDM, there is no lack of interest. The North American MDM market is clearly headed for a significant increase in activity in 2007 and 2008. Year 2006 included six vendor selections for major MDM implementations, and it is forecasted that 2007 and 2008 will include at least 15 MDM selections per year, based on information available today on the level of utility interest in MDM.

If we take a look back at what transpired with relation to MDM during 2006, perhaps some light can be shed on what lies ahead for 2007 and beyond. To date, the investor owned utilities have led the industry in MDM deployments; however, analysis indicates that in addition to investor owned utilities, there will be numerous municipals shopping for MDM systems in 2007. Several of the larger co-operatives have also indicated that MDM is in their future plans. While a few gas and water utilities see MDM as a necessity, the bulk of interest has come from electric utilities.

This makes sense, given the fact that electric utilities have identified greater benefits from interval data than have gas and water utilities. Most recently in early 2007, announcements were made that Detroit Edison selected EnergyICT to provide MDM services and Itron Enterprise Edition was selected by Avista Utilities and was in production at Florida Power & Light Company. The activity in the MDM marketplace is not limited to the utilities within the United States.

Spurred by the Ontario Energy Board’s requirements surrounding advanced metering and the data accessibility and sharing that help fulfil the requirements, the MDM selection process and implementations are occurring at an equally accelerated pace throughout Canada. Chatham-Kent Hydro, Enbridge, Manitoba Hydro and the Ontario ISO are just a few of the organisations that are moving forward with MDM implementations and applications. It is true that the MDM market is still young; however, the demands of the utilities that have already implemented the systems are keeping vendors busy nevertheless.

In addition to adding new customers to their lists, MDM vendors are busy adding new functionality to their products and expanding their service offerings. Like all products, once customers begin to adopt and use, there is a growing need for enhanced functionality. This is an ongoing process that will only prove to benefit the industry as a whole as new uses of data and new data sources are identified.

The key is to recognise that MDM is not about the managing of any particular AMI network or only the management of billing data. Rather, MDM plays the role of allowing other key utility IT systems to act as if there were only one AMI technology in the field by providing the information required by each IT system in that system’s required format, as well as providing the necessary business process management for effective, low-cost operations.