The North American bulk power industry underwent a momentous change on June 4, 2007, when reliability standards became, for the first time in history, mandatory and legally enforceable in the United States. This change has been a long time coming, although when the seeds for mandatory standards were first planted is debatable.

Some say it was the direct result of the 2003 blackout in which 50 million people lost power in the northeastern and midwestern United States, and Ontario, Canada. Some say it was first proposed in the 1990s in separate reports from the North American Electric Reliability Corporation (NERC) and the US Department of Energy (DOE), to reflect the move toward a more competitive wholesale electricity market characterised by open access to transmission networks. Some would say many in the industry always knew it was, ultimately, the most effective way to police our own industry. Some would point out that NERC standards have been mandatory and enforceable in Ontario since 2002 as a leading indicator.

Regardless of the origins of the idea, the US Energy Policy Act of 2005 called for the creation of an industry-based, self-regulatory reliability organisation to set and enforce mandatory reliability standards. The NERC was certified as that organisation in July 2006, and also charged with assessing future reliability and adequacy of electricity supply. In its fall 2006 Long-Term Reliability Assessment, NERC identified a number of actions to be addressed in order to improve resource adequacy, including the need to use demand response as a key resource alongside generation and transmission. Advanced metering is a key enabling technology that will help facilitate widespread implementation of demand response programmes, and therefore has the potential to impact positively on electricity reliability.

As the former head of a distribution company, I have seen firsthand the potential that advanced meters can bring to the table. I truly believe that the industry is on the verge of another paradigm shift that is right up there in importance with mandatory reliability standards: the shift from a static, analogue grid to a modern, modular, interoperable one based on distributed generation and digital technologies like advanced metering.

The potential of demand response

Utilities have used a form of demand response for many years, to manage peak demands during tight supply situations, especially during extreme weather events. These programmes applied mostly to large industrial customers who agreed to reduce their demand at a utility’s request in exchange for a lower rate. More recently, new forms of demand response programmes have been developed to reduce the environmental impacts of generating electricity. Some savvy regulators provided economic incentives to utilities that encouraged their customers to reduce electricity usage.

The mindset shift is required not only of industry but of consumers. As the DOE pointed out in its report, the benefit of improving resource efficiency through demand response will come about due to “closer alignment between customers’ electricity prices and the value they place on electricity.” The DOE also succinctly pointed out the hurdles to widespread adoption of demand response: “Conventional metering and billing systems for most customers are not adequate for charging time-varying rates and most customers are not used to making electricity decisions on a daily or hourly basis.”

The role of advanced metering

Our imaginations have only begun to envision the potential benefits of advanced meters. If demand response programmes were sufficiently widespread, quantifiable and dependable to be factored into system operations, demand response could serve as operating reserves, and could even be used along with other resources to regulate system frequency and correct imbalances in the electrical system caused by weather- or human-induced interruptions.

Just imagine if another blackout like the one in 2003 occurred, or that a string of tornadoes knocked out service at several transmission substations and irreparably damaged several major transformers. Today, the short-term fix to this situation would be to interrupt power to customers on a rotating basis for short periods of time, to manage the load. In fact, this happened in 2003, when some Canadian customers endured rolling blackouts for more than a week. In the digital electric grid of the future, system operators would have another choice: selectively interrupting targeted, lower-priority components of individual customers’ loads. This would be possible because of the detailed data and control available on each customer’s service, made possible by advanced metering. Utilities and customers both would have more detailed options and more precise control of the solution.

Advanced meters are needed to achieve the smart grid of the future, one where all equipment is standardised and works together, and one where sensor technology can identify issues before they manifest themselves, or even help the system ‘self heal’ when a problem does occur. It is not hyperbole to say that advanced metering has a huge role not only in effective demand response programmes, but in the reliable, intelligent electric grid of the future.

Now to throw the cold water of reality onto this pleasant vision: The situation today, if not dire, is a fairly dismal place from which to start this push for more demand response and the advanced metering and communications that enable it.

DOE reports that “total demand response and load management capability has fallen by about one-third since 1996 due to diminished utility support and investment.”

The DOE report concluded that it is not even possible to quantify the benefits of demand response today, in part because of inconsistencies in how it is measured. NERC is very aware of these inconsistencies, which present themselves every year when data is collected for the reliability assessments. Historically NERC itself has only collected data on interruptible demand, and direct control load management programmes, most of which do not require advanced metering.

THE Evolution of NERC

The North American Electric Reliability Corporation (NERC) was originally a voluntary industry organisation, formed in 1968 following a 1965 blackout that affected 30 million people in the northeastern United States and southeastern Ontario. Since then, NERC’s role has evolved along with the industry as a whole. The industry today is more open and competitive, especially at the wholesale level, than a few decades ago, and there is much more use of technology to improve reliability and efficiency. These advancements, along with the ever-increasing importance of reliable electricity in today’s computer-based society, are reflected in NERC’s new role as the entity responsible for overseeing and improving the reliability and security of the bulk power system.

This is no small task: the North American electric grid has 340,000 km of high voltage transmission line, represents electricity demand of more than 830 GW, and provides electricity to 334 million people. NERC is subject to oversight by the US Federal Energy Regulatory Commission and various governmental authorities in Canada. Governments in both countries look to NERC and the industry to develop standards based on their collective technical expertise.

While it has been around in one form or another for decades, NERC takes on its most significant incarnation yet on 4 June 2007, when it becomes the enforcer of mandatory reliability standards for the US. NERC develops these reliability standards using an ANSI-accredited process that is designed to result in clear, consistent and technically sound standards. Compliance with standards is enforced through an independent and rigorous programme of audits and other measures, and monetary and nonmonetary penalties are assessed for violations.

Among other responsibilities, NERC also assesses bulk power system reliability and adequacy annually via a 10-year Long-Term Reliability Assessment, and winter and summer forecasts; monitors the bulk power system in realtime; and works to reduce the vulnerability of the industry’s critical infrastructure. NERC approaches its mission with a desire to establish and promote a culture of excellence in reliability planning and operations. To that end, it strives to identify issues before they become critical, shares best practices, shares ‘lessons learned’ from analysis of bulk power system events, facilitates communication within the industry and between industry and government, supports training and education of industry personnel, benchmarks performance to provide the industry with an objective lens through which to view itself, and works with bulk power system participants to gauge their ‘readiness’ or ability to adhere to the NERC reliability standards. 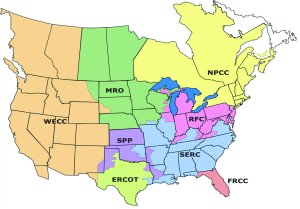 But, to return to a hopeful outcome, momentum is starting to build. In Canada, Ontario is conducting a widespread smart metering programme established by legislation and regulation. The province has committed to having smart electricity meters in 800,000 homes and small businesses by the end of the year, and throughout the entire province by the end of 2010. The system is being built on a common infrastructure, and utilities can recover prudently incurred costs through rates.

In the US, small publicly owned entities such as electric cooperatives have been relatively active in pursuing automated and advanced meters. Also, the areas of two regional reliability organisations – the ReliabilityFirst Corporation and the Southwest Power Pool – have advanced metering penetration rates of about 14 percent, well above the national average.

is developing additional reliability standards related to demand response, and will continue factoring demand response into its annual reliability assessments. In fact, its focus is being broadened to encompass the full array of demand response programmes, including incentive-based rates, time-based rates and direct-load control programmes. The impacts of these programmes on peak demand and resource adequacy will be captured by utilities in their base forecasts, and advanced metering will play a major role in utilities’ ability to measure and verify these impacts.

The DOE and FERC reports expressed optimism about the potential of demand response and DOE listed in its report the adoption of enabling technologies as one of six areas of recommendation to encourage demand response nationwide. The US federal government has passed the challenge to the 50 American states, encouraging state regulators to aggressively pursue demand response for retail customers, and noting that changes in regulation are required to make demand response economically attractive for utilities.

Demand response and enabling technologies like advanced metering and communications will have their day. The slow momentum is currently gathering steam, and there is increasing recognition and respect within the industry of the role demand response can play, not only in environmental protection and load management, but in grid reliability. The future for advanced metering is bright. It will just take some time to reach that light at the end of the tunnel.