Living in the Gulf South has its advantages – a relatively mild climate, a relaxed lifestyle, and lots of outdoor recreation, to name a few. However, like most places, there is also a downside. Some years, the hurricane season is relatively minor and may disrupt daily routines only briefly and in minor ways, or not at all. That certainly wasn’t the case last summer (2004) when four major storms ripped through the northeastern Gulf of Mexico in just a few short weeks, hitting the coastal areas of Mississippi, Alabama and Florida especially hard.

Because even one relatively mild hurricane can bring strong winds, rain, hail and deadly tornadoes, they wreak a special kind of havoc on electricity utilities. With power lines, poles, switches and other outdoor assets unprotected and vulnerable to the elements, most utilities know what to expect – and what not to expect – in the aftermath of storms like the ones that developed in the Gulf of Mexico last year.

One of the things utilities usually do not expect is for their meter reading infrastructure to keep operating during – or for prolonged periods after – a storm moves through their service territory. Manual reads are generally suspended well in advance of an approaching storm, as are walk-by and drive-by systems. As a result, metering may be lost for lengthy periods at a time when its functionality and availability are needed most. Contrary to traditional thinking, which theorised that if there was no power flowing there was nothing to meter, savvy utilities have since learned that meter data can be vital to outage detection during a storm, as well as to restoration in its aftermath.

The advanced metering infrastructure (AMI) network developed and deployed by AMDS represents an entirely new approach to the gathering, transport and dissemination of utility metering data. This unique new concept is based on a wireless network architecture that is simple, reliable and inexpensive to purchase, install and maintain. Similar deployments are also in progress at various utilities across the United States.

The patented technology employed in the AMDS network architecture allows a meter end-point to reliably communicate directly with tower-mounted AMDS base stations that are five to ten miles away, thus eliminating hundreds or even thousands of complex, intermediate tier pole-top and/or roof-top mounted data collectors. 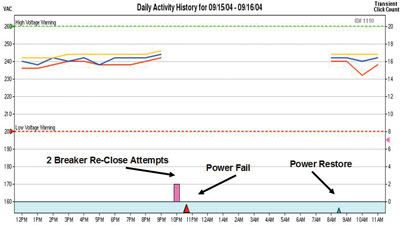 Power outages were reported throughout the storm

One example of the reliable performance this approach offers was evident during last year’s Hurricane Ivan, the most powerful of the four storms hitting the region. Ivan ripped through the southeastern United States packing heavy rains and winds topping 150 mph. Yet despite inflicting tens of millions of dollars in property losses and facility damage along its path, AMDS installations of the industry’s only FCC-approved AMR (automatic meter reading) solution operating on an unshared primary-use licensed spectrum continued to report not only meter readings but also periodic power outages, restorations, line voltage and up-line breaker faults throughout the storm, as depicted in the chart above.

The tower network remained 100% operational during the entire storm, even though some tower sites operated for eight hours or more on internal back-up power. This high availability is directly related to the simplicity of the system design, requiring only a few towers and minimal hardware. Notably, the system is also two-way, allowing specific meters to be remotely queried and commanded directly from the utility office in real time.

As utilities migrate from traditional AMR into an advanced metering infrastructure, the need for reliability, connectivity and performance is becoming increasingly apparent to utility executives, especially when committing the enterprise to multi-million dollar investments.