When Echelon designed its corporate headquarters, it was decided to deploy in it its LonWorks technology with as many of the devices that the company makes or helps to make. The control system in the building allows control of major systems like HVAC as well as minor systems like window shades.

The Echelon campus is located in San Jose, California and is made up of two three-storey buildings of 700 m2 each. The buildings were constructed from 2002 to 2004. The floor plan is primarily individual offices with occupant adjustable light level and ‘voting’ on temperature in each zone. There are also some electronic laboratories.

Kenmark, the real estate services company contracted by Echelon to run the real estate and facilities department, also brought another site in Monterey, owned by a different client, to participate in the study. So the 2004 study included two buildings out of 18 with LonWorks controls.

THE FIRST YEAR OF STUDY
The first year of study starting 8 September 2004 included four events or ‘critical days’, when test were conducted when the temperature was to be unusually hot. When a critical day was forecast, participants were notified via a message from a ‘price server’ computer at LBNL that the hypothetical price of electricity was increasing in response to high demand. The computer also broadcast the hypothetical price at 15 minute intervals. On a normal day the server would broadcast a predetermined base rate. On critical days two stages of elevated pricing were used in these communications – the first stage set at about three times the normal cost base rate and the second stage set at about five times base. For the first few tests the buildings under control were not able to receive the broadcast price and they were manually put into the ‘cutback’ mode. In this first year of study a blunt approach was used to cut electric consumption on short notice at one building on the Echelon campus. During the first, lower elevated price stage, the cutback mode entailed turning off all common area lights on the periphery of the building and relying on the use of natural light or light harvesting. 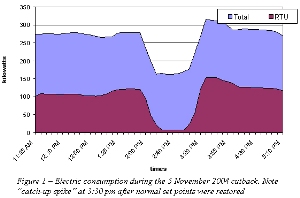 In the second stage two of three roof top air handling units (RTUs) were shut down. As an example the 5 November 2004 cutback is shown in Figure 1. By separating lighting and HVAC load reduction efforts during event participation it was possible to measure the effectiveness of efforts on these subsystems. This technique has been continued throughout the study participation up to the present.

Hot days are rare in the early Fall of Northern California. The buildings were tested in temperatures around 30OC. This should not have been particularly stressful on the HVAC system. Still, many occupants complained about the lack of conditioned air and the increased office temperatures. On one test the company president’s east facing corner office reached 32OC. A fine tuning of the cutback mode was required.

CHANGES IN THE SECOND YEAR
In the second year of the study, Kenmark decided to move forward with only the Echelon building. Some changes were instituted: The response to the price server was automated, and no one needed to throw a switch to go into cutback mode. Facilities staff received email and text messages during events. There was a concentration on employee comfort. Results were mixed. 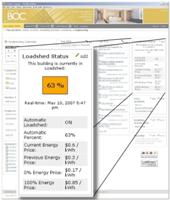 All lights in the building that were not shut off completely in the previous year were cut to 60 percent during an event. HVAC consumption was reduced by shutting down two of three RTUs, but the air flow was increased. The goal was to have employees perceive that the system was running by noise and air movement. Kenmark also put up an ‘energy dashboard’ on its proprietary Building Operations Centre (BOC) website, as shown in Figure 2. This feature informed managers and employees during an event. It created a feeling of participation and improved employee buy-in.

Feedback was solicited from employees after each event. The most frequent complaint was that the forced lighting level reduction was too low. Directions to reset lighting levels according to employee preferences were distributed after the second event. First stage, or lighting cuts, achieved a high of 11 percent of load, but then fell with employees reducing cutbacks. It is estimated that 25 percent of the employees bypassed the lighting level reduction. However, employees did not complain about the increased temperature as much as the previous year, which can be attributed to better air flow and education. Echelon was able to get a message out to its employees explaining what should be done when notified of a critical day. Employees were also encouraged to dress in light clothing and lower exterior shades and blinds.

MORE CHANGES IN 2006
Last year (2006) was the third year in the study. For the third time the strategy of how to deal with the HVAC was changed. In this summer no RTUs were shut down but instead the overall building temperature was moved higher and the duct pressure reduced. The aim was to move the fan loads in to the most efficient slope of the motor performance curve. The system programming was allowed to adjust for a much lower cooling demand. This adjustment reduced energy without anyone perceiving an impact. 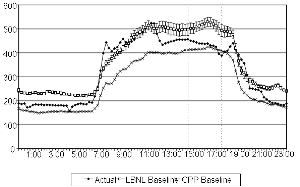 Figure 3 – Electric consumption during the 24 July 2006
cutback. A ramp out is in place to reduce
the demand at the end of the event.

A ramp out was programmed into the end of the tests. This is a common way to avoid the ‘catch-up spike’ which occurs when the system tries to cool the building after normal set points have been restored (see Figure 1). It allows the system to return to normal on a gentler curve and reduces consumption because the load is usually restored to a reduced level as it is late in the day. consumption profile evolved in two years and the shape of the curve when a ramp out is in place.

During an event 30 percent of the consumption could be consistently cut for the three hours of the second stage. This caused only a minor amount of employee discomfort. The 2006 study included 23 other participants.

After three years of participation in this study some economic benefit has started to be realised. Echelon signed up for a Critical Peak Pricing rate schedule which mirrors the study scenario, except that it gives participants 24 hours notice of an event. Total electric costs for the year were cut in the middle single digits, while for the first three years of operation and commissioning the building electrical consumption cost was cut in the mid-teens year on year.

CONCLUSIONS
Echelon will continue to participate in the LBNL study this coming summer, with more plans to improve its response to events. The boiler and hot water loop temperatures will be lowered slightly. Air will be directed to the sunny side of the building while it will be reduced on the shade side. This can be done because of central control of all VAVs. As noted above controls extend to the window shades and all the shades will be lowered during an event to test if that affects consumption.

Precooling may also become part of the strategy, but Kenmark is researching a new rate structure which gives almost no advanced notice of events and would make precooling difficult. The new rate would save more money and mirror the study conditions in every way.

Two years have been spent on refining the behaviour of the HVAC system, but a reexamination is necessary of how to reduce the lighting load. The lighting still accounts for 30 percent of the load on a very hot day. As previously mentioned, the best lighting cuts were 11 percent and they have settled into a consistent 6 to 8 percent of load.

As the company enters its fourth year of demand response the law of diminishing returns is starting to catch up, but the goal is to cut another 3 to 5 percent this summer and pontential further reductions are feasible.