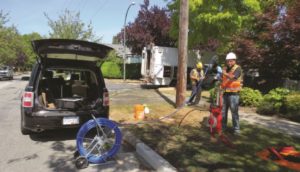 US smart metrology company Mueller Systems has secured a deal with West Virginia American Water for a suite of technology products aimed at reducing leaks at the utility’s distribution mains.

West Virginia American Water will deploy the Mi.Echo system along a 10-mile stretch of West Virginia’s Kanawha Valley River, including Charleston, Kanawha City, South Charleston and Dunbar, making the project is the largest application of the Mi.Echo technology in North America to date, Mueller Systems claims.

Speaking about the benefits of Mi.Echo, Hassan Ali, vice president and general manager of Mueller Systems, said: “By integrating technology into water infrastructure, West Virginia American Water is gaining greater access to data and the ability to integrate leak detection into their metering program, both of which can help them manage their assets more efficiently and improve customer service.”

The AMI solution incorporates components of the LeakFinderRT platform, an acoustic-based system developed by Echologics, an affiliate of Mueller, which can be used in the field to non-invasively locate distribution main leaks without breaking ground or inserting tools into the water system.

Commenting on the deployment, Jeff McIntyre, president of West Virginia American Water, said: “With the Mi.Echo system, we will be able to continuously monitor for leaks in a non-invasive manner to ensure that treated water reaches its intended destination and is not lost.

“Additionally, this technology will give us the opportunity to detect leaks and address repairs before they become significant issues, which could lower production costs and reduce potential disruption for our communities.”