The amount of advanced metering1 in the United States grew significantly in the last two years according to a recent survey by the Federal Energy Regulatory Commission (FERC).

As it did in 2006, FERC conducted a nationwide survey of the advance metering deployments of electric utilities, power marketers, regional transmission organisations and demand response providers. The 2008 survey requested information on electric industry meters in all 50 states, with attention to meters that measure usage in short time intervals and with meter data retrieval more frequent than monthly. Over two thousand organisations responded to the survey or about a 60% response rate, sizable for a voluntary survey.

The Florida Reliability Coordinating Council (FRCC) and Electric Reliability Council of Texas, Inc. (ERCOT) show the greatest percentage increases since 2006 and the highest penetrations by region in 2008, 10.4% and 9.0% respectively. In the FRCC region, adoption of advanced metering by municipal utilities accounts for the largest increase in that region. The increase in ERCOT is primarily due to activity by investor-owned utilities and cooperatives. Advanced metering deployment by Oncor, a large investor-owned utility in Texas, accounts for 77% of the increase.

The FERC 2008 Survey also shows that most states now have advanced metering penetra- tion above zero. The five states with highest penetra- tion of advanced metering are Pennsylvania, Idaho, Arkansas, North Dakota, and South Dakota. Pennsylvania had the largest increase in penetration between the 2006 and 2008 surveys, moving from 0.3% to 23.9% over the two-year period.

Remote connect/ dis- connect is used by entities such as electric utilities to connect or dis- connect custo- mers as they change resi- dences or to disconnect or reconnect customers using prepaid metering. This functionality is gaining in importance, surging from a relatively low 15% up to 48% usage. Prepaid metering, sometimes associated with the remote connect/ disconnect functionality, also saw modest gains. 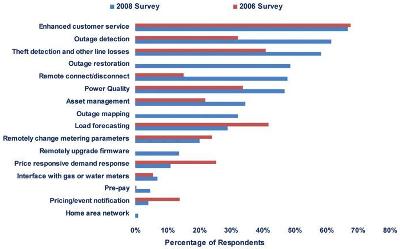 Use of AMI with home area net- works (HANs) did not rank high on the list of uses in the 2008 survey, al- though AMI- HAN inte- gration is increa- singly being in- cluded as a requirement in recent requests for proposals issued by utilities in North America. A HAN “is a network contained within a user’s home that connects a person’s digital devices, from multiple computers and their peripheral devices to telephones, VCRs, televisions, video games, home security systems, ‘smart’ appliances, fax machines and other digital devices that are wired into the network.”2 Integration between HANs and advanced metering systems allows an entity to provide information to customers and remotely manage large loads (such as air conditioning and electric heat). Since this functionality is being included in the Southern California Edison and the Texas utilities rollouts, the percentage reporting this functionality will likely increase in the coming years.

LARGE UTILITY ADVANCED METERING DEPLOYMENT PLANS
The 2007 FERC Demand Response Report identified 28 utilities that since 2005 had announced plans to deploy over 45 million advanced meters.3 Recent contracts to purchase advanced metering systems by several key large utilities will bring planned advanced metering deployments to nearly 52 million. These deployments are scheduled to take place over the course of the next five to seven years. Advanced metering plans for large electric utilities include:

Congress included a number of directives in Title XIII of EISA 2007 calling for both federal and state encouragement of smart grid development. Title XIII states, “Smart Grid is defined to include a variety of operational and energy measures – including smart meters, smart appliances, renewable energy resources, and energy efficiency resources.”

EISA 2007 directs that states “shall consider” requiring each utility “prior to undertaking investments in non-advanced grid technologies… [to] demonstrate to the State that the electric utility considered an investment in a qualified smart grid system based on appropriate factors, including: (i) total costs; (ii) cost effectiveness; (iii) improved reliability; (iv) security; (v) system performance; and (vi) societal benefit.”16

Congress took another significant step to promote advanced metering in the Emergency Economic Stabilization Act of 2008 passed in October 2008.18 This new legislation establishes permanent changes in how smart meters and other smart grid technologies are depreciated for federal tax purposes. Previously, these assets were figured at 20-year depreciation, but now the depreciation life is 10 years.

The recently announced draft American Recovery and Reinvestment Bill of 2009 in the House of Representatives includes $11 billion to improve and strengthen the electric grid.

The author’s views do not necessarily represent the views of the Federal Energy Regulatory Commission.