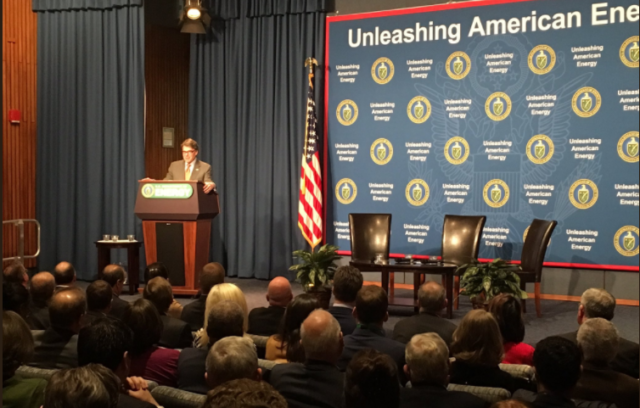 The US Department of Energy (DoE) has announced a plan to modernise its organisational structure to prioritise the policies of the Trump administration.

The department will be re-organised by the Secretary of Energy, Rick Perry, under the DoE Organisation Act.

According to a statement, re-organising the DoE will ensure the department is able to sustain the dominance of the US energy market, advance innovation and protect the country’s energy and national security in line with timelines set by the new administration.

The US government claims the move will help the country improve management of the environment.

The Office of Energy Policy and Systems Analysis will be replaced by an Office of Policy which will be managed by the Under Secretary of Energy.

The Under Secretary of Energy will be responsible for “energy policy, applied energy technologies, energy security and reliability, and certain DOE-wide management functions.”

The Under Secretary of Science will manage programmes on research and development of innovative technologies and environmental cleanup.

Perry, said: “We are announcing a plan to modernize the Department of Energy in order to build upon the success of the last 40 years and meet tomorrow’s challenges.

“This new structure will support American energy dominance, enhance our energy and national security, and improve outcomes in environmental management while ensuring DOE remains the leader in scientific innovation.”

The move comes at a time the Trump government is facing huge criticism from state governments for wanting to reverse the Clean Power Power and shift utilities’ focus to reliance on conventional power generation ahead of renewable and clean energy generation.

The restructuring comes in the context of the Trump administration’s drive to cut regulations across various industries.

It remains to be seen if reshuffling the DoE will pave way for an increase in investments in clean energy technologies or reduce the benefits achieved by Obama’s policies on renewable energy.