One recent example can be found in Ontario, home to one-third of all Canadians and a province facing a critical energy shortage. Although new investments in electricity generation are planned, rapid economic growth coupled with the threat of rolling blackouts have prompted the Ontario government to take aggressive steps to develop a conservation culture.

By introducing time-of-use (TOU) rates that charge higher rates during peak demand hours and lower rates during off-peak times through Advanced Metering Infrastructure (AMI) and providing consumer incentives to reduce loads during peak periods, the government is calling on all Ontarians to help reduce the electric power supply demand gap. It is expected that energy savings and load shifting due to price awareness will result in a reduction of more than five percent of the province’s electrical demand.

Elster – selected by a coalition of five of Ontario’s largest utilities who have partnered to research, specify, tender and procure AMI solutions – has been brought onboard to help Ontario successfully launch its Smart Metering Initiative (SMI). That initiative called for the installation of 800,000 smart meters by the end of 2007, and a total of 4.5 million meters by the end of 2010, resulting in a smart meter on every home and business in the province.

ONE TECHNOLOGY – MULTIPLE IMPLEMENTATION OPTIONS
After an independent piloting of various technologies and an in-depth evaluation process under a government-appointed fairness commissioner, the five utilities chose Elster’s EnergyAxis® System for each of their implementations. The nature of Elster’s EnergyAxis System gives utilities significant flexibility when deploying a solution. A limited number of highly flexible components enable simple rollout and on the fly adaptability.

The EnergyAxis communication network consists of a meter-only architecture, with no requirement for repeaters, towers or pole mounted devices. The system is able to build out its communication infrastructure automatically, without intervention or detailed planning, by simply installing meters. The flexibility and robustness of the EnergyAxis System and the associated controlled mesh network allowed each of the five utilities to meet their 2007 deployment targets, and at the same time, address their own respective business needs and objectives.

To date, these five Ontario utilities have installed more than 800,000 EnergyAxis smart meters and on their own have successfully exceeded the government goals set for the entire province. Using the EnergyAxis System, they are operating the largest deployment of two-way mesh network AMI solutions in the world today, bringing in hourly interval data from more than 500,000 endpoints daily. Toronto and Ottawa today each read hourly interval data from more than 200,000 endpoints nightly. 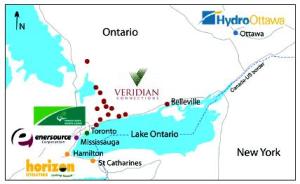 REACHING A COMMON GOAL
Despite Ontario being a competitive deregulated jurisdiction, cooperatively, the utilities worked to develop project specifications and to identify vendors that could meet those specifications. While each utility did its own AMI technology trials with various vendors, they jointly developed a comprehensive specification for AMI that would meet the requirements of Ontario’s SMI. Recognising their own set of unique requirements and preferred approaches, the five utilities elected to work with a single vendor – Elster – for the implementation of their SMI.

Elster, previously accredited by Measurement Canada as an Authorised Service Provider to inspect and seal electricity meters at its Raleigh, North Carolina manufacturing facility, was prepared to meet the requirements of the project by offering the option of factory-sealed meters. Elster, working closely with each utility, put in place a robust, customer specific supply chain process to deliver more than 10,000 sealed meters a week to ensure no time was lost due to installers waiting for meters.

“We chose Elster based on the technical capability and robustness of the EnergyAxis System, the competitive pricing and Elster’s long-standing commitment to and support of our customer relationship and metering in Ontario,” said Owen Mahaffy, programme manager, Hydro Ottawa.

Working collectively, the five utilities were able to aggregate their meter requirements and maximise buying power to minimise cost to the consumer. Individual contracts with Elster were negotiated and other utilities were encouraged to piggyback on their buying power to ensure the province easily met its target at the lowest cost. By the time contract negotiations were completed, there remained little over 12 months to install meters in the field and implement the AMI systems.

To better manage the installation and integration of a large number of meters, each utility worked to develop and use new automated field installation tools and systems. Additionally, internal processes and other systems such as billing and Customer Information System had to be modified. New positions were created, personnel trained and contractors hired.

“Toronto Hydro’s initial priority was to install high volumes of meters at residential and small commercial accounts,” said Steve MacDonald, manager, meter technologies. The utility targeted the suburban part of the city first and is now shifting the installers to the more densely populated downtown core. Over the next few months, the focus will move to medium and large commercial accounts.

“The most pleasant surprises in implementing the system have been the ability of the staff to consistently deliver high volumes of meter changes and the outstanding supply chain processes put in place with Elster that have provided reliable and effective stock levels and product delivery,” he said.

Toronto Hydro has maintained a torrid pace, deploying 5,000 meters a week for two years, utilising only its own staff, which rallied to the challenge. To date, Toronto Hydro has used land-lines to achieve its targeted reading cycle of three hours, but plans to investigate other WAN options moving forward.

Veridian Connections Inc.
Veridian has 110,000 customers covering separated suburban, urban and semi rural services areas. Veridian’s plan was to roll out 20,000 meters by December 2007, but have doubled its initial target by installing 40,000 smart meters, using a combination of in-house personnel and contractors for the installation.

Terry Robertson, manager of metering, said, “As the AMI system is deployed, Veridian plans to leverage the system to handle operations in outage and restoration reporting, and voltage monitoring initially with our sights on leveraging our AMI investment with smart grid technology.”

Veridian elected to use a third-party service provider to provide daily interval reading and has contracted with Olameter, Ontario’s leading meter services company. Levering its own EnergyAxis System, Olameter is able to provide AMI and other complementary services to customers not wanting to make the investment in the software and integration themselves.

Frank Fabiano, director, customer connection, stated, “Horizon’s approach was to install 50,000 outside meters by area. The deployment included the installation of approximately 1,800 C&I meters because Horizon wants to leverage the AMI infrastructure for the backhaul of C&I meter data.”

Horizon outsourced the majority of the smart meter installation work, but used staff to install all data collectors and hard-to-access meters. After investigating and testing a number of options, including Wi-Fi, Horizon elected to deploy a wireless WAN using a GPRS public carrier.

“In Enersource’s first phase of deployment, the focus was on the residential meter deployment,” said Tom Wasik, senior manager, metering and settlement.

“Enersource used a ramp-up methodology, starting slow and working through its processes to ensure consistency before accelerating the programme to just over 9,000 meter installations in a month.” Enersource also uses public wireless carriers for its WAN network, using collar-mounted modems to enable a totally socket-mounted solution.

Hydro Ottawa
Hydro Ottawa, located in the nation’s capital, has 280,000 customers over a contiguous area. While it serves mainly an urban area, the utility does have some rural areas as well as a significant population of indoor meters. “Our approach was to support the provincial government’s objective of installing 800,000 smart meters by the end of 2007,” said Owen Mahaffy, programme manager. “In less than four months we were able to install almost 100,000 meters. Now we have almost 150,000 networked smart meters fully integrated with our CIS.”

A SUCCESS
Having surpassed the Ontario government’s goal of installing 800,000 smart meters by year end 2007, Elster along with the noted utilities has successfully contributed to the Ontario government’s Smart Metering Initiative. In another measure of success, these utilities were recently awarded the “2007 AMR Project of the Year” by Utility Automation and Engineering T&D™ magazine. The award recognised these utilities for their accomplishments in meeting the 2007 targets under the Ontario SMI.