Seattle City Light has been encouraging its customers to conserve electricity for more than 30 years and is always on the lookout for new tools that can help people save money by increasing their energy efficiency.

So when conservation resources director Bob Balzar and information technology director Roy Lum were approached by Microsoft in 2008 about partnering with the technology giant on the development of an online energy saving application, they jumped at the chance.

“We had no doubts that we would like to be one of the first utilities to roll this out,” Balzar said.

The project eventually came to be called Microsoft Hohm – a play on the words “home” and “ohm,” which is the standard unit of measure for electrical resistance. The free application allows users to track their energy consumption. It also asks them to fill out a home profile and then uses advanced analytics licensed from Lawrence Berkeley Labs and the Department of Energy to assess users’ energy data, home features and appliances to identify personalised energy saving recommendations.

Recommendations cover a wide range of improvements from installing compact fluorescent light bulbs and caulking seals around windows to recycling old, secondary refrigerators and looking for Energy Star-rated appliances when buying new ones.

“Providing a customer with a bill every two months doesn’t give them enough information to make good choices about their electricity use,” Balzar said. “Anything we can do to help them understand how they’re using energy, how they can be more effective with it and how they can use it more efficiently is helpful. That’s what Hohm is designed to do.” 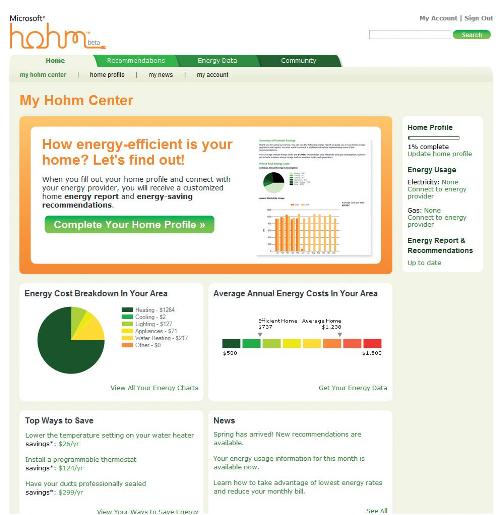 Microsoft released a prototype of “Beta” version of Hohm in June with Seattle City Light as one of four utility partners. The others were Sacramento Municipal Utility District, Xcel Energy and Puget Sound Energy.

“The Microsoft Hohm team aims to partner with leading, innovative utility companies who want to empower their customers with valuable energy usage data,” said Karen Jaskolka, Microsoft’s principal group program manager for Hohm. “The first electric utility in the nation to be greenhouse gas neutral, Seattle City Light’s partnership with Hohm demonstrates its commitment to improving energy efficiency throughout its community and helping its customers be responsible consumers of energy.”

In October, Seattle City Light became the first utility to allow its customers to upload their energy use data directly into their Microsoft Hohm account. Updates are made with each billing cycle. In the future, City Light hopes to install advanced metering, which could allow customers to track their usage through Hohm or other applications in near real time.

A beta release allows the company to get feedback from users and make changes in the programming before rolling out a final product. The company has not announced a schedule for releasing the finalised version of Hohm.

City Light continues to provide extensive feedback, helping Microsoft improve the Hohm prototype by accounting for differences in housing, such as the number of exterior walls a condominium might have, and energy use considerations.

Microsoft also hosts a social networking community and pages on Facebook and Twitter where users can ask questions, comment on their experiences, suggest improvements and pick up tips. More than 4,000 people have become fans of the Hohm Facebook group.

“Seattle City Light wants to help its customers make sustainable energy choices,” Balzar said. “Microsoft Hohm is one more tool they can use to better understand their electricity consumption and then make good decisions that reduce their use and save them money.”

“All customers are different,” he said. “That’s why we need a whole bunch of different tools.”

Helping customers conserve electricity makes good business sense for City Light because it allows the utility to meet growth in demand without buying additional power from other suppliers or building a new power plant.

Microsoft believes Hohm can help utilities demonstrate their environmental responsibility and meet regulatory requirements, where applicable. Utilities can leverage Hohm to encourage customers to reduce or spread their energy consumption during peak periods, furthering demand management. Hohm will also provide the utilities with relevant aggregated data about consumer usage of Hohm so the utilities can decide how they can best market conservation programs to users.

“The Microsoft Hohm team is constantly working to make it easier and more interesting for users to improve their energy efficiency, and to assist utilities in their demand management programs,” Jaskolka said. “There’s more to come soon.”

Seattle City Light’s relationship with Microsoft has been relatively low risk and low cost while enhancing the opportunities for customers to conserve energy, Balzar said. “Where that relationship goes? The sky’s the limit.”