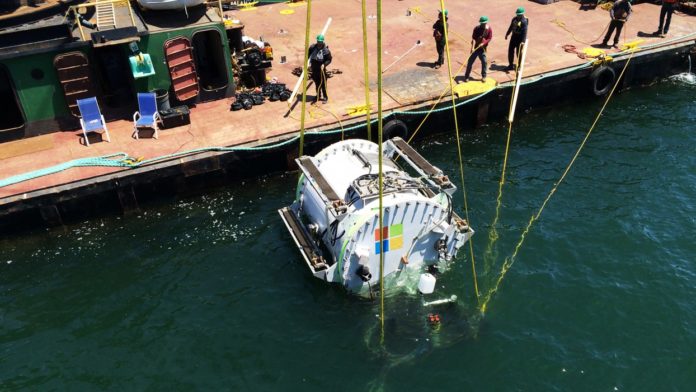 Researchers from global software and technology corporation Microsoft are reported to be working on a project in which energy-intensive data centres operate under water, using currents or tides to generate electricity and the cold depths to provide natural cooling.

Commenting on the underwater location, Microsoft said that half of the world’s population lives near large bodies of water and there a shift to accessing software hosted in the Internet cloud. The company said having data centers submerged nearby could save money and speed up access to information.

According to the BBC, Tom Dowdall, a climate campaigner at Greenpeace, said: “Experimental underwater data centres could be more sustainable if connected to offshore wind power, but Microsoft must focus more on investing in new renewable energy now. Microsoft is far behind Apple, Google and Facebook in sourcing renewable energy for existing data centres.”

[quote] The pilot dubbed ‘Project Natick’ tested a prototype vessel on the ocean floor about a kilometre off the US Pacific Coast for approximately four months last year.

Microsoft Research NExT special projects leader Norm Whitaker said: “… in one day this thing was deployed, hooked up and running.”

Data from the experiment is still be analysed, says Microsoft, with the next phase of the project being planned and may include a bigger vessel with 20 times the computing power than the data centre, located at Microsoft headquarters in Redmond, Washington.

Whitaker added: “This is speculative technology, in the sense that if it turns out to be a good idea, it will instantly change the economics of this business.”

Submerging data centres underwater is also believed to make web services work faster, with users living in close proximity to data centers lowers the delay, or latency – a big plus for web users.

Larry Smarr, a physicist and scientific computing specialist and director of the California Institute for Telecommunications and Information Technology at the University of California, San Diego, commented: “For years, the main cloud providers have been seeking sites around the world not only for green energy but which also take advantage of the environment.”