In 2004, to encourage a culture of conservation and to help the province of Ontario, Canada, smooth out peak demand periods, the provincial government announced every household and business would have a smart meter installed by 2010 and that time-of-use (TOU) pricing would eventually be introduced. 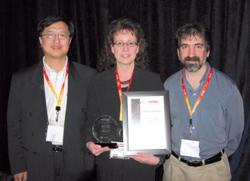 With TOU rates, customers are better able to manage their costs if they choose to shift their electricity usage out of the peak periods to lower cost periods. Toronto Hydro is the first North American utility to roll out mandatory TOU rates in a major urban city in an initiative that supports other key smart grid functionality, such as outage management.

A smart meter pilot began in 2005, and in 2006 Toronto Hydro selected Elster as the meter vendor for residential and small commercial customers. Mass deployment of smart meters commenced with Toronto Hydro’s own staff installing the smart meters.

Customer feedback was essential and communications tactics and processes were improved as a result. Input was also sought from the frontline customer service representatives, the “company’s ambassadors,” to gain firsthand insight on customer issues or concerns.

In 2007, the advanced meter infrastructure (AMI) initiative was implemented, including data collection. Toronto Hydro also created a very specialised tool to help customers prepare for TOU rates. Customers were invited to register on an interactive TOU web presentment site where they would see their personalised electricity consumption and how they would fare on TOU rates.

This portal was created with the premise that people have to know how much they are using and how to best manage consumption. They were encouraged to shift and conserve their usage and then see the benefits of their efforts. The interactive TOU website also features “Anita,” an online service representative avatar to answer questions and help customers navigate the site and includes energy and load shifting tips. At the same time, an innovative conservation programme was introduced to cultivate a conservation culture by giving customers more ways to manage their energy consumption.

This tool was launched as a four-month pilot where 50,000 customers were invited to register. During this time, additional research was conducted to gauge awareness and understanding of smart meters and TOU rates, determine the best communications vehicles and of course, to seek feedback on how to further improve the web portal before being rolled out to the rest of our customer base.

Highlights of the research included:

Using a phased approach, TOU pricing was introduced in the summer of 2009 with a pilot group of 10,000 customers. By the end of 2009, 500,000 customers had been communicated with and transitioned over to the new pricing structure.

As of March 2010, 100,000 customers have registered to view their hourly electricity consumption and TOU pricing. The call centre impact has been minimal with no major customer escalations.