The GIS model is complex with numerous objects, joins and attributes, while the OMS model is simplified, relatively flat with only the essential objects and attributes needed to manage outages. For example, a recloser in the GIS model has an installation object, multiple units (one for each phase) and a control object, while the OMS model just has the recloser object (Figure 1). 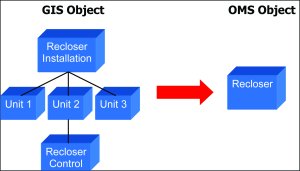 The GIS model has an emphasis on detail, not speed, while the OMS model has an emphasis on speed, not detail. There usually are many update users associated with the GIS, each with a unique view, while the OMS has many operations users sharing only one view. The GIS will show all the various states of facilities or equipment such as ‘existing’, ‘proposed’, etc., while the OMS will show only the existing facilities. Static devices show nominal status in the GIS. Dynamic devices show current status in the OMS such as closed or open. 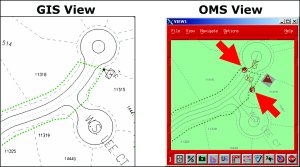 If an object that is needed to operate in the OMS world doesn’t exist in the GIS, then as the GIS is extracted, a method can read the GIS attributes and create the OMS object needed. A great example of this is underground transformer elbows. There are attributes in the GIS that imply elbows exist; however, they are not displayed. On extract to the OMS, the elbows are created and placed in the Viewer so they can be operated when needed (Figure 2). To support a large number of transactions during large outage situations, the OMS operations model contains only the essential objects and attributes: 32 electrical device classes. 6 conductor classes. 50 background classes. 22 attribute tables.

The OMS omits poles and secondary, although it could include them – but the more objects in the system, the greater potential impact on performance. The OMS excludes proposed facilities and flattens the GIS object hierarchy (88 classes in the OMS versus 350 classes in the GIS). Approximately 10% of Duke’s 2,300 circuits are updated nightly. Any change such as a transformer size will trigger an entire circuit to be updated from the GIS to the OMS. Background or landbase maps are updated three times a week. Any change such as a road name will trigger an entire tile to be updated. The nightly refresh process has three major steps: Data extraction, preprocessing, and model build. Changes are detected during data extraction, connectivity is set in the preprocessing step and maps are generated in the model build step (Figure 3). 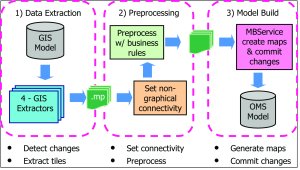 One Model Administrator is used to update the OMS model, both electrical and background. This individual does the daily GIS extraction and model build along with OMS data validation. When a new circuit is added, this individual also handles the control zone changes to assign the new circuit to an area for dispatch. At times, they also perform or initiate GIS data cleanup. The Model Administrator has found that the automated GIS QA/QC scripts work the best to assure data quality in the OMS. Presently there is about 99.89% customer match, 0.03% de-energised and 0.001% loop/parallel.

How GIS Is used in OMS

The GIS data is used in the OMS application or applications that support OMS in the following ways: 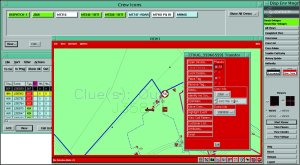 In both the OMS dispatch full seat and web dispatch application, the OMS viewer acts as an operational model of the system. The viewer will contain the dynamic graphical representation of distribution conductor, outages and crew locations (Figure 4). It is a single operational model managed at multiple levels that permits dynamic load transfers between circuits. Those within the utility that do not have access to the OMS dispatch application can use the management reporting tool or dashboard of outages. It will list summary outage information, detail outage information as well as display a map of outages across the service territory (Figure 5). 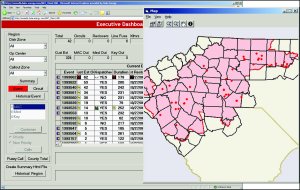 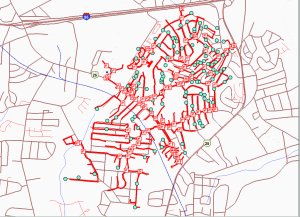 Reliability engineers can run reports from our outage system and then import them into a map viewing application for post-storm analysis. During the December 2005 ice storm, one particular circuit had around 200 individual outage repair sites on it (Figure 6).

Outage maps are also posted both on the internal website and on the external customer facing website. These maps are updated every fifteen minutes. Copies of the outage maps are periodically saved, which can be useful during post-analysis of major storm events to graphically display the course of the storm (Figure 7). 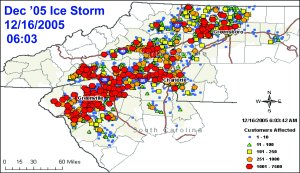 There are many GIS links to OMS for a visual presentation of outage information; however, as explained above, the OMS uses a reduced model for a reduced graphic representation in a more dynamic world. The GIS to OMS model update process includes extraction, preprocessing and model building with QA/QC or data cleanup being done in the GIS. There are multiple uses of GIS data in the OMS arena. These include graphical outage analysis and crew dispatch, management reporting, mobile dispatch and mobile maps, plotting outage history maps and outage maps on the web. The GIS links to off-the-shelf OMS systems creates a much more visual outage system than the old text-based mainframe OMS systems.