The state of Michigan, in particular, is well-suited to capitalise on this technology, as the automotive world capital. The result will be less use of gasoline, fewer emissions and the creation of thousands of high-paying alternative energy jobs. PHEVs have the potential to:

Provide peak load power to the electric grid, if utilities’ electric distribution provides vehicle-to-grid (V2G) capability through smart grid technologies. V2G systems are designed to allow electrical energy to flow both into and out of the vehicle, in effect making the PHEV a distributed energy storage system and generation device.

Add to this that V2G-capable PHEV vehicles have the potential to impose limited additional capacity requirements on the electric system, and it is no wonder that automakers and utilities alike are intrigued by the notion of a large number of such vehicles taking to the nation’s streets. Yet, as John Sullivan, of the Michigan’s Transportation Research Institute, points out, PHEVs bring with them a set of challenges as well, including:

But is the electric grid ready for PHEVs? Recent developments in the electric and automotive industries indicate that the commercial success of PHEVs is dependent on electric utility deployment of intelligent grid technology. At the national level, the Energy Independence and Security Act signed last year calls for the development of a framework for protocols and model standards for grid information management to facilitate the interoperability of smart grid devices and systems. At the state level, Michigan is uniquely equipped to explore and develop these technologies, with its world-class automotive expertise. That is why the Michigan Public Service Commission (MPSC) on March 11 directed its ongoing smart grid collaborative to expand its focus by starting a pilot programme on PHEVs.

So, the time is right for Michigan’s utilities and automotive companies to move forward with integrating PHEVs into the electric grid in a way that enhances both. The state’s two largest electric utilities – Detroit Edison and Consumers Energy – intend to deploy advanced metering infrastructure (AMI) in their service territories this year. And Michigan’s automotive companies have a pivotal opportunity to retain and expand on their role as world leaders in automotive production, design and engineering excellence.

The MPSC is no stranger in supporting the development of these types of technologies. In 2002, it provided a $4.2 million grant to NextEnergy Center and the Michigan Economic Development Center to assist in the design, construction, and installation of a microgrid. NextEnergy’s Microgrid Power Pavilion in Detroit was completed in 2005 and is a working laboratory system of multiple power sources of different sizes and technologies to serve aggregated electrical and thermal loads through distributed generation. This microgrid currently powers the NextEnergy Center facility – with the capability to power additional buildings – and interconnects with the Detroit Edison electricity system.

Working with DTE Energy, Rolls-Royce Fuel Cell Systems, and Electrical Distribution Design, NextEnergy is also testing a new electricity delivery system that would generate and deliver power where and when it is needed. And the MPSC recently announced a new round of grants of up to $5 million that will go toward projects that integrate PHEVs into the electric grid.

MICHIGAN’S SMART GRID INFRASTRUCTURE
To achieve a high penetration of PHEVs in a way that retains the stability of the electric grid first requires the development of Michigan’s smart grid infrastructure. It only makes sense that Michigan takes the next step in preparing the electric grid for this potentially major change. So, automotive companies and suppliers will now join with 18 regulated electric utilities in Michigan, research and development organisations, universities, and the MPSC staff to initiate a pilot programme addressing the integration of PHEVs into the electricity grid.

This group is charged with using actual vehicles, some of which include not only plug-in technology but also V2G systems, if and when these become available. They will be looking carefully at:

In integrating PHEVs into the electric grid, the meter serves as the interface. Therefore, how metering will be handled is a key – if not the key – to a successful PHEV interface with the electric grid and one that is a positive experience for customers. The smart grid collaborative’s PHEV pilot programme will need to examine how and when PHEVs will interface with the electric grid. Will uncontrolled charging be allowed or not? Will charging only be allowed during certain hours of the day? Will charging be available in more than just homes, and if so, where? And of course, how will electricity for charging PHEVs be priced? 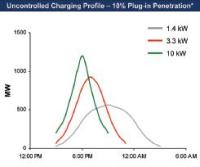 At the last meeting of the MPSC’s smart grid collaborative on March 13, Haukur ‘Hawk’ Asgeirsson, manager of power systems technologies at DTE, the parent company of Detroit Edison, provided an update on its smart grid projects. In that presentation, he provided information on how uncontrolled charging of PHEVs would affect the overall electric grid and DTE’s seasonal peak loads – all at 10 percent PHEV penetration (Figure 1).

Based on this analysis, DTE concluded that uncontrolled charging would lead to localised distribution disruptions – problems like voltage dips, service interruptions, and transformer failure. Further, DTE forecasted that multiple vehicles charging on one transformer, even at relatively low charge rates, can lead to electric service problems and disruptions.

However, measures can be taken, according to DTE, to mitigate potential grid issues such as:

All these things – and more – are items that the MPSC’s PHEV pilot programme will examine in great detail in the coming months and years. By acting now, Michigan is positioning itself to be a PHEV leader in the utility and automotive sectors. Clearly, the benefits are many: a more reliable, robust and secure electric grid; significant reductions in both gasoline consumption and greenhouse gas emissions; increased use of biofuels; and the creation of high technology, high paying jobs. PHEV technology will certainly spur the development of sophisticated electricity metering and pricing by utilities.

As MPSC staff, utilities, transmission companies, universities, and automotive companies come together for this pilot programme, it will require many innovative approaches to integrating PHEVs into the electric grid. Michigan stands ready to accomplish this integration – one that will help make GM’s vision for its Volt (a daily commute without using a drop of gas) a reality, and it will do so with a state-of-the-art smart grid.