Crucial to successfully managing customer satisfaction, infrastructure maintenance, and water resources are automation strategies like those employed in the City of Ann Arbor that allow daily collection of meter reads and related data.

The decision to pursue a fixed network advanced metering infrastructure (AMI) solution was made in conjunction with a much needed aging water meter replacement initiative. The older meters were no longer accurately recording water consumption and the water system was unable to efficiently recover its costs and reinvest in the infrastructure. Other benefits of implementing an AMI solution were: 1) daily vs quarterly meter readings; 2) cost of service savings in labour, fuel and equipment; 3) better billing accuracy; 4) improved customer service; and 5) improved asset management capabilities. 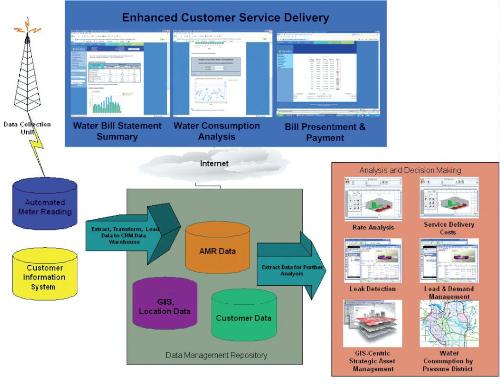 However, staff took the project one step further, making the City of Ann Arbor among the first water utilities to provide customers with nearly real time, AMI water consumption data and bill summaries via the city’s website.

These regular reads are used to help people understand how they are using water, as they are using it. In addition to the twice daily meter readings, the City’s Customer Service Center, in conjunction with the Information Technology Services Unit, developed the innovative Internet-based “Enhanced Customer Service Delivery System,” including a water usage tracking application that provides customers with access to their own meter reads, helping them to identify patterns in water usage and to take steps to reduce unnecessary water waste and costs.

In the “Monthly Usage at a Glance” on the water consumption (Figure 2), it’s obvious that the usage in April 2009 was significantly higher than it had been previously or since that time. However, most accounts in Ann Arbor receive quarterly bills. Therefore, prior to this implementation, there was no easy way for citizens to obtain consumption data and consequently, little awareness about how water usage might affect a bill until they actually received it and were already into the next three-month billing cycle. 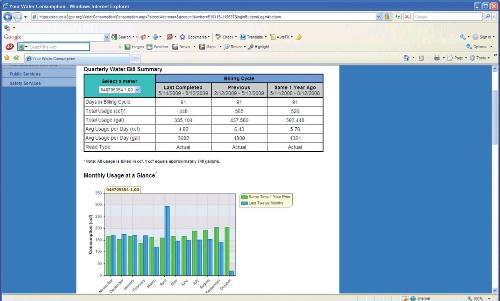 Today, customers are provided with “nearly real-time” consumption readings online. They can log on to the City’s website at any time and gauge how much their bills will be at the end of the current cycle if their current usage patterns remain the same. This type of feedback helps them to understand the effect that specific types of usage, such as lawn irrigation, have on a bill. They can also identify where their usage may have been higher than their average daily consumption, potentially resulting in a bill that is also higher than expected.

To see which days accounted for the higher than normal usage in the prior example, the user would enter a date range into the “Analyze Your Daily Water Consumption” fields to see the individual readings for each day in the date range. In Figure 3, the date range 4/10/09 through 4/25/09 shows that “normal” daily usage averaged about 6-7 units. On 4/16/09 the daily usage rose to 9 units and then to double digits for 5 consecutive days before returning to the normal average of 6 units on 4/22/09. This type of detail helps consumers to account for what otherwise might be assumed to be a billing or meter reading error or anomaly. 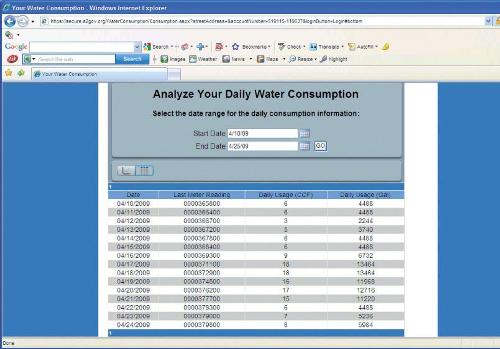 The application also provides the ability to view the consumption data as a line graph and to download it to an Excel spreadsheet for further analysis (Figure 4). Water conservation tips, a link to the on-line eBill and bill payment application, and other insightful information combine to assist customers in actively managing their own water consumption, instead of merely reacting to a higher than expected bill.

In short, upgrading and integrating the City’s water utility billing technology not only allowed the City to improve its billing accuracy and reduce overall water system costs, it also provides customers with better self-service and water management options.

Just as importantly, the AMI system data also supports the cost-of-service rate structure implemented by the City. Costof- service rates encourage changes in peak usage patterns and ensure fair distribution of costs for current as well as future expansion of water-distribution infrastructure. In other words, cost-of-service is a method of developing rates that considers customer use characteristics and the various investments in the system that support those characteristics. In addition, the Ann Arbor City Council has directed that as a matter of policy, water rates should promote conservation. 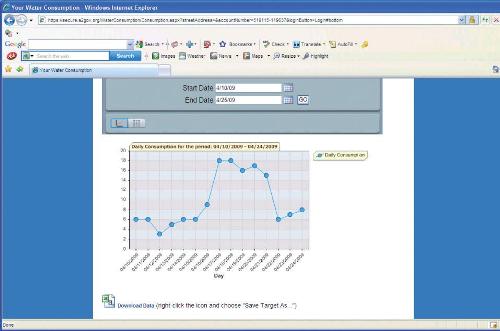 In the commercial base where the account volume is smaller and the individual impact of use is larger, the City is able to apply a cost of service rate structure by analysing the water use characteristics of each individual customer and then assigning them to a rate class based on historic water use. Once assigned to a rate class, a commercial customer pays the same rate for all water units used for a year.

A key component of the calculations used to determine commercial rate-class assignments is a peaking factor, or the ratio of peak day to average water use. Peaking factor makes it possible to assign rates that take into account the costs of providing the infrastructure necessary to support peak usage during the system peak period. This means the customer that uses water consistently over time will pay less for each individual water unit used than the customer that uses a lot of water for a few events during the peak period and little water over the rest of the year. For example, a customer who uses millions of gallons of water on each of only five days a year will have a higher peaking factor and therefore pay more per unit than a customer who uses millions of gallons of water on most days throughout the year.

The City utilises a six-year financial plan for each of its water utilities in order to evaluate changes in capital investment needs, operating expenses and use projections to plan for changing revenue requirements. This approach has allowed Ann Arbor to propose rate adjustments that are distributed in a level way across several years, thus avoiding rate shock and allowing for development of fund balances to pay for needed improvements.

The City hopes to eventually do predictive analysis based on changes in usage patterns that will allow it to better optimise its water system. This type of analysis requires a large amount of data collected over a number of years. Since introducing cost-ofservice rates, Ann Arbor has seen some fairly dramatic changes in water usage patterns that have reduced the system maximum day demand, but does not have enough information to know whether these patterns will hold during the worst conditions, for instance a severe drought.

AMI data may also ultimately help Ann Arbor refine its residential cost-of-service-like rates as well. Today, rates are based on a unit cost recovery calculation using a distribution of all residential billing data across a bell curve and resulting in four rates/tiers for charging water costs. This approach does not take into account the peaking factor for individual accounts. With future improvements that enhance the ability to mine the AMI data, the City may be able to utilise the peak usage of individual residential customers in the same way that peak factor is currently used to determine rates for commercial customers. This approach might actually lower rates for residential customers who use larger amounts of water over time but whose peaking factors are low (i.e. large families). Conversely, it might raise rates for the gardener who irrigates profusely during a few weeks in the summer since water utilities must build infrastructure to service peak demand.

A holistic approach to water utility requirements has allowed Ann Arbor to anticipate infrastructure needs as well as maximise the benefits of AMI for its citizens. Through cost-of-service programmes and creative use of technology, the city will continue to refine how it distributes costs to customers based on peak usage and see the benefits as customers respond to the value and cost of water.

It is clear that to serve customers better, municipal water utilities must collect a lot of information related to the water system. Fixed network AMI is a key driver in this process, allowing water utilities to collect water readings as needed without customer inconvenience, creating detailed customer profiles, enabling near real-time sharing of data, structuring equitable rate plans, and promoting conservation efforts.

The City of Ann Arbor’s AMI deployment was the recipient in the
“Water Advanced Metering Project” category of a 2009 Metering,
Billing/CIS America 10 Years of Excellence Award.