Increasing uncertainty derived from peak load demand and green generation are driving cost factors in infrastructure investments for capacity which is only utilised a few hours on a few days of a year. As an alternative to rising infrastructure investments, residential load control via standard ripple control systems can present a solution to uncertainties in supply and demand with advantages over standard AMI solutions.

Peak load management has long been a challenge for energy market participants. For a few hours of each year, demand peaks tremendously causing, at best, purchase of power on the spot markets or utilisation of otherwise unnecessary capacity in peaking plants or, at worst, rolling blackouts and brownouts.

If that weren’t enough to contend with, the greening of power generation is adding new pressures by creating uncertainty in supply. Wind and solar are being paired with backup generation capacity based on more reliable sources dependent upon fossil and nuclear fuels.

Both forces drive uncertainty, green generation in supply and peak loads in demand. These uncertainties in supply and demand are large and growing cost drivers within electricity markets, driving power suppliers to invest in spinning and peaking capacity to ensure adequate reserves and grid operators to upgrade transmission and distribution capacity.

Capacity used for only a few hours a year costs money. These costs must be passed on to consumers in the form of higher rates. Fortunately, there appears to be an elegant alternate means to the brute force of high infrastructure costs in largely redundant capacity. However, deploying the alternative will require regulators to step up to the plate and make some tough decisions.

The potential robust solution to uncertainties in supply and demand can be found from comparing the diurnal loads of Ireland and Czech Republic. 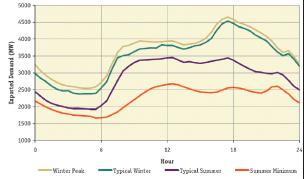 Load control in the Czech Republic, as well as countries such as South Africa, New Zealand and elsewhere, relies upon ripple control receivers (RCR). RCR technology was developed in the 1960s for quickly broadcasting an on/off signal across transmission equipment to millions of endpoints simultaneously. Typical endpoint units are capable of 25 years operation with minimal utility interaction. Ripple control systems are currently manufactured by a number of globally leading companies such as ZPA Smart Energy, Enermet, and Actaris. Unlike most AMI solutions designed for collecting meter reads on a scheduled basis and for providing load control on a spot-endpoint basis or demand response signals on a day-ahead schedule, high endpoint count load control via RCR is designed for near real time signaling. 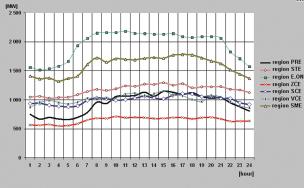 The high endpoint count and near real time load control capability of the ripple control system have long made it a workhorse technology for peak load management in many countries. These features also would make RCRs an ideal technology for grids fed by green generation. Through ripple control technology, grid operators may be able to quickly shed load in response to fluctuation in generation. When wind generation is low, a signal via RCR technology could curtail residential loads temporarily and restore power once green generation is restored or as conventional generation capacity comes on line. The result would be a lowered investment requirement in generation capacity, as well as better management over transmission and distribution capacity.

If ripple control systems can simultaneously perform the tasks of managing peak loads and reducing generation capacity investments associated with green sources, one might ask why there isn’t more press and acceptance of the technology.

Many utilities still work under perverse incentives which reward capital investments with higher regulated rates. In such regulatory environments, any activity that indicates the need to build a new power plant will be emphasised in order to justify increased capital investments, leading to higher consumer rates and improved utility profitability.

One would expect that regulators are wise to this problem. Unfortunately, regulators work under perverse incentives that encourage them to beat-up utilities into lowering prices while not asking consumers, who are also voters, to change behaviour. Given the cries from voters to be free to do as they wish, load management which mandates when power is used is likely to be unpopular with some advocacy groups, and perhaps unpalatable for some regulators too.

Between the incentives for regulators to please freedom loving voters and the drive for utilities to justify rate increases, there appears to be a moral hazard that derails appropriate decisions in implementing residential load control.

However, with the increased pressure for green generation and the continued need to receive higher returns on limited grid investments, it may be time to revisit the issue with a bit more rigour. Imagine if instead of building back-up capacity for wind farms and solar panels, utilities had load shedding capacity that is coordinated with the green generation supply, thereby increasing the fraction of power generated from green sources simply by using information and communication better.

Will such a simple system come to light? Not unless the regulators step up to the plate. Fortunately, with the pressure for going green increasing, the politics of power may be realigning the incentive structure. Ripple control systems may see a revival.

How US utilities are leveraging IIoT for smarter and safer cities