Water heating represents between 13% and 17% of residential energy consumption nationwide. Based on the 2007 Census data, roughly 42% of all homes in the US have electric water heating; this equates to over 53 million homes. With such a high saturation of electric water heating nationwide, direct load control for water heaters has high potential for reducing peak demand, especially to help offset summer peaking driven by electric air conditioning use.

One objective of this study is to quantify the possible savings from water heater curtailments aimed at reducing summer peak demands. In addition to just cycling water heaters off during periods of high demand, water heaters could also be controlled to only operate during off peak hours. Utilities that have reduced offpeak generation costs could benefit from off-peak water heating programmes. In addition, off-peak water heating programmes could generate demand for renewable energy sources. For example, the state of Texas is a large producer of wind energy. In Texas, research has shown that the majority of wind energy is generated off-peak. By shifting electricity loads from on-peak to off-peak the demand for off-peak generation sources, such as wind energy, increases.

Peak Savings Estimate for Direct Load Control of Residential Electric Water Heaters
The following analysis was conducted to estimate the peak demand savings potential for a one hour curtailment of electric water heaters over the period of a utility’s highest electrical demand. In order to quantify the potential savings, a per participant demand savings was determined using residential modelling software Energy Gauge. Weather data was extracted for two representative cities from each of the International Energy Conservation Code (IECC) weather zones (Figure 1). Due to their small population base, Zones 1 and 7 were excluded. 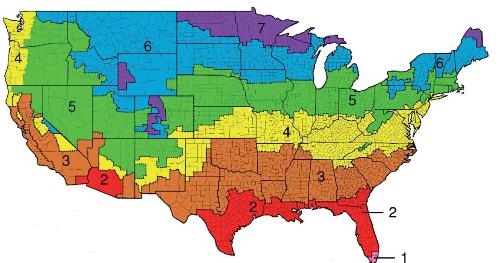 The cities that were selected are listed in Table 1 with their corresponding IECC weather zone.

Energy simulations were conducted for each location to determine the electric water heating load profile. The same generic house model was used for each of the climate zones analysed. The simulated home required a standard 50 gallon electric water heater with an energy factor (EF) of 0.90 (the federal standard EF as of 1990). For the purposes of this study, the peak summer hour that was assumed to be the target of a curtailment event was the hour of 4 pm to 5 pm. Each of the hourly water heater load shapes for the various weather zones tested were reviewed for their simulation-assigned summer peak day. From the hourly water heater load shape data outputs, the average peak demand at the assigned hour for the 10 weather zones simulated was 0.40 kW. Table 2 displays the annual energy use and peak demand outputs for a 50 gallon electric water heater from each weather zone analysed. 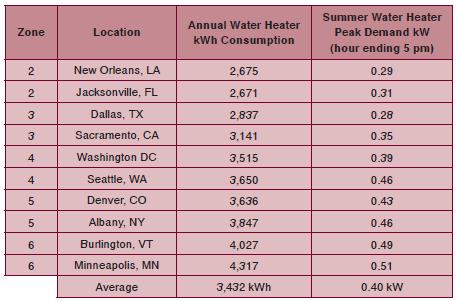 Participation estimates for direct load control
The National Assessment of Demand Response Potential study published by the Federal Energy Regulatory Commission (FERC) found that direct load control programmes for residential central air conditioning could have participation rates as high as 25% without the benefit of any favourable pricing programmes. With the addition of advanced metering infrastructure (AMI), the study found residential participation rates could be between 19-100%.

Though the FERC study did not look at residential water heating demand control specifically, participation rates could be just as high or higher due to a less noticed impact on the customer’s comfort. A pilot study of direct load control for water heaters by the Portland General Electric Company found that customers participating in programmes did not notice any difference in the availability of hot water during curtailments. Given the minimal effect on customer comfort, it is reasonable to sssume participation rates for water heating direct load control could be as high as 25% or higher.

Potential results of water heater direct load control
As noted, roughly 53 million homes nationwide have electric water heating. Potential peak demand savings based on various participation rates can be calculated given the estimated saving per unit of 0.40 kW. Figure 3 displays potential peak demand savings for an electric water heater direct load control programme. If a 25% participation rate was reached nationwide, the resulting savings would be about 5,300 MW of peak demand reduction, which equates to about $424 million in utility savings due to reduced on-peak generation needs.

Costs for direct load control
There are several different load control switches already available on the market. A standard load control switch costs about $70 to $100 depending on the number of switches purchased . This cost does not include installation or any additional utility infrastructure costs; however, for utilities with already existing AMI, the only incremental cost would be the additional switch.

Customers participating in the off-peak programme must install water heaters with larger capacities, higher efficiency ratings, and high insulation levels in an effort to minimise the drop in water temperature during those periods of curtailment.

Great River Energy has had a high degree of success with these offerings. Table 3 displays the participation rates and estimated peak demand savings achieved by the two programmes. Renewable energy potential for electric water heating Electric water heaters also have the potential to efficiently utilise and build demand for renewable energy. Residential water heaters, unlike most home appliances and HVAC equipment, are effectively retaining or delivering hot water on a continuous yearround basis. Since they can be modified to operate only during off-peak hours, the potential exists for them to be configured to utilise renewable energy generated off-peak.

To accomplish renewable off-peak electric water heating, large capacity/high efficiency electric water heaters would require a dedicated device with temperature and voltage control capability connected to a utility supplied load control switch or AMI device. These water heaters would be utility controlled to only operate during off-peak hours. The water heater would need to heat stored water past the conventional set point, typically 120OF, in order to meet the homeowners’ hot water needs over the entire length of the utility on-peak schedule. To prevent the possibility of scalding water (water over 130OF) from reaching the faucet or showerhead, a thermostatically controlled mixing valve would need to be installed to mix cold water with the stored hot water to deliver water at the conventional 120OF set point. For this type of application, only approved devices which fail to the cold setting should be approved for installation. Outfitting large capacity, high efficiency electric water heaters with the described controls would allow for the water heaters to be operated only during prescribed off-peak periods, and/or at times when renewable generation, such as wind, is occurring off-peak.

As mentioned earlier, Texas is a large producer of wind energy. Due to the volatility and swings in wind energy generation, it has more impact on longer term use than on random net-load variations. Wind energy is not always correlated with loads, and wind generates more energy in the spring months and winter months. Figure 3 displays annual wind generation in West Texas by month. Notice that wind generation is actually lowest during the summer peak months, when demand is highest. Shifting year round water heater electricity use from on-peak to off-peak could potentially lead to greater demand for off-peak generation resources, such as wind power. 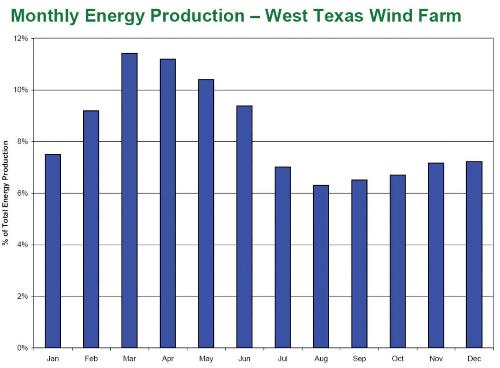 Costs for extended curtailments and renewable energy potential
To enable an electric water heater to participate in an extended curtailment programme, the installed tank would need to have a higher capacity of about 85 to 105 gallons, as well as above average insulation levels. An electric water heater meeting these requirements and equipped with the appropriate load control device can be purchased and installed for about $1,500 to $2,000.

In addition, to outfit a water heater to function as a renewable energy storage device, it must also have an interactive water heater control with two way communication capability and a thermostatic mixing valve which controls the outlet water temperature. This equipment configuration has an estimated cost of $600 .

While off-peak electric water heating programmes have the potential to provide significant peak demand reductions, they can also serve to create higher demand for off-peak renewable generation, such as wind energy. As more wind farms are continually being constructed, the likeliness of the majority of their generation occurring during off peak hours should be considered in future utility demand response programmes.