Many utilities in the US see smart meters as a foundational technology for changing the relationship between the utility and the consumer, optimising energy use, and reducing operational costs. However, electric utilities, particularly those that are shareholder owned, face ongoing challenges in communicating their value to both regulators and ratepayers.

High expectations for the market penetration of smart meters in the US reflect recent growth and are further buoyed by the announcement of stimulus funds, but there will likely be barriers to rapid deployment in the immediate future. Deployments will certainly continue, but regulatory and technical delays will likely cause an inconstant rate of deployment and orders from vendors.

The recently announced Smart Grid Investment Grant (SGIG) awards, part of the larger stimulus package passed in February, are certainly a welcome catalyst for the industry. According to the US Department of Energy (DOE), these grants will lead to the installation 18 million additional smart electric meters (roughly 13% of the residential market) once the projects have been completed. However, because of cost-share requirements, utilities will face familiar regulatory obstacles. Those utilities absent from the list of awardees continue to move forward with their projects and may ultimately benefit from taking a more measured approach.

GROWTH THROUGH THE IOUS
The industry has seen rapid growth and transformation just in the past year. Looking at the survey results from the Federal Energy Regulatory Commission (FERC), installed advanced meters increased from 6.7 million in 2008 to an estimated 7.95 million this year, a 19% increase. The FERC also forecasts that there will be 80 million smart meters deployed by 2019 under their partial deployment scenario, which amounts to over 60% of the market in 2019. Parks Associates, a market research firm, recently completed a study of smart meter deployments and also estimates that there are approximately eight million smart meters installed in the United States. My colleagues and I at the Institute for Electric Efficiency (IEE) have also been tracking smart meter installations and planned deployments for investorowned electric utilities (IOUs) over the past year and we have observed equally impressive progress. Through direct contact with IEE member utilities and public information, including press releases, utility commission documents, and articles, we have created a resource, updated quarterly, that estimates the number of smart meters deployed in the next ten years. Our results from September, prior to the announcement of SGIG awards, were significant: looking at deployments either under way or that had been publicly announced, we estimated that there will be 58 million smart meters installed in the residential sector by 2020, or roughly 45% of the market.

IEE research has been focused on meter installation and efforts by our members, primarily IOUs, in the residential market. However, it would be remiss to not address the contributions of other ownership classes of utilities. To date, rural cooperatives have achieved a higher market penetration of advanced meters collectively than any other ownership class and several public power utilities, such as Sacramento Municipal Utility District and Austin Energy, embraced smart meter technology early and have incorporated other complementary strategies to optimise operational benefits and energy savings. Though many cooperatives and public power utilities have been pioneers, IOUs have deployed the most meters in absolute numbers and are essential to high market penetration considering their share of the market nationwide.

IOUs face unique issues in introducing new technology. They assume the risk of failure and, in most cases, do not have the luxury of quickly shifting strategy if a technology does not perform as other industries do. In some cases, the often lengthy regulatory approval process is further protracted for smart meter deployments due to difficulty in communicating the value of meter upgrades, concerns over uniform standards, and questions about specific smart meter technologies. However, a number of utilities have worked with other stakeholders to push forward with ambitious meter upgrade programmes. Southern Company, for instance, has already installed 1.4 million meters throughout their service territory in the southeast and are continuing at a pace of 4,000 meters per day until they reach their goal of 4.4 million electric meters. Pacific Gas & Electric in California began upgrading their customers’ meters in 2006 and has installed 1.6 million smart meters for electric service, with another 700,000 for gas customers. Ameren has installed over 650,000 smart meters in Illinois and aims to upgrade a total of 1.1 million electric meters by the project’s end.

Despite these area-wide deployments, the rate of smart meter installation has not been constant and, counter intuitively, some smart meter manufacturers have even seen their revenue stagnate or decline in the past year. While these changes have coincided with the passage of the stimulus bill, they have not been caused by it as some might think. Our member companies have indicated that regulatory and technology related issues are the primarily cause of delays, and though the ARRA has caused resources to be re-directed at the state and commission level, the overall consensus among the members is that the SGIG funds have accelerated their meter deployment plans.

THE FEDERAL PUSH
The landscape for all stakeholders dramatically changed in late October when the US Department of Energy announced the 100 recipients of the smart grid investment grants, totaling $3.4 billion. The majority of these federal funds, over 70%, have been awarded to IOUs. Many of their smart meter projects were conceived and announced before the stimulus bill was signed in February 2009, but the SGIG awards announced on October 27 promise to hasten both existing and new projects. This represents a significant step forward. In September, just prior to the SGIG announcements, the IEE found that utility-scale smart meter deployments were either under way or planned in 31 states. Grants were awarded to utilities in 18 of those 31 states, with utilities in another 7 states receiving awards for smart meter projects not previously announced (see map). 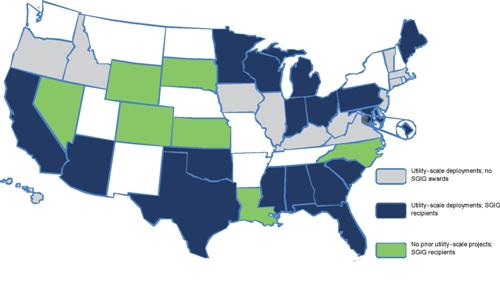 Electric meter upgrades will continue, although probably not as quickly as some expect. The SGIG awards do not come without significant capital requirements from the utilities and, in certain cases, promises of a protracted regulatory process. While the federal contribution is significant, IOUs receiving the funds will still have to pursue regulatory approval for their contribution. Recipients are required to contribute a minimum of 50% of the programme cost, which most IOUs plan to exceed. Out of the six utilities receiving the maximum SGIG amount of $200 million, all will contribute more than the required amount with some contributing well above that. For instance, CenterPoint Energy in Texas has pledged an additional $439 million, while Duke Energy plans on contributing $652 million for smart meter projects in Ohio, Indiana, and Kentucky. Contributions from the recipients will more than double the federal contribution to over $8.1 billion in overall investment. To put this in perspective, the Consortium for Energy Efficiency calculates that the combined budgets for electric efficiency in the US totaled $3.2 billion last year.

Other stakeholders – primarily meter vendors and manufacturers – should recognise that progress will not be uniform. If utilities plan on covering their contribution through rates, as most do, they will be in the familiar position of justifying the expense of expanded smart grid technology to regulators and consumer advocates. The IOUs face the same arguments of justifying the cost through the operational and societal benefits of smart meter deployment. A few utilities have already received conditional approval of their smart meter plans and will proceed quickly. Other, more ambitious projects will take more time and the process will depend on how receptive regulators, consumer groups, and ratepayers are to meter and infrastructure upgrades.

Several utilities were conspicuously absent on the list of 100 SGIG recipients, namely Oncor, National Grid, and the California IOUs, but the good news is that those not included are not planning on significantly delaying or cancelling ongoing projects. Since the announcement, we have contacted a number of these members with projects under way and none plan to halt their deployments, although some are facing one to two year delays as they either plan to appeal to the utility commission or seek capital to pay for the meters.

Despite these expected delays, both for SGIG recipients and the rest of the industry, there are some advantages in a slower deployment rate. Both the technology and the marketplace continue to evolve and, given time, hardware and software will become more robust. This is very important in an industry that normally considers infrastructure investments over a 20 to 30 year horizon. Technical standards are also an issue and a slower growth rate will allow for more of a consensus to develop over the next few years. Similarly, complementary measures can develop in parallel with meter upgrades. Though advanced meters are seen as a foundational technology, they are most effective when used as an enabling technology for more efficient and informed energy use on the part of the customer. Dynamic pricing and user feedback measures, for instance, are complemented by advanced metering. But to date, dynamic pricing programmes and pilots in the residential market have been introduced in only 15 states and feedback solutions are currently employed in a handful of pilots. More time will allow for pricing and technology programmes to develop.

This will be an interesting space to watch, particularly to see how quickly the SGIG funds are awarded and put to use. The DOE has pledged to begin processing SGIG contracts, the next step in the process, in 30 to 60 days and things are happening on an accelerated scale. Look to the utilities awarded the largest amount of federal funds as indicators of how quickly this will be a true stimulus for the industry. There will be delays, but the industry, from the utilities to meter manufacturers, would be wise to use the time to communicate the value of the technology to end-users and work toward industry standards.