The New York Independent System Operator (NYISO) has been operating competitive wholesale electricity markets serving New York State since 1999. As New York’s competitive markets progress, the NYISO is working to enhance the connection between the price signals sent by the markets and consumer response to those price signals. A key area of focus, at present, is on shortening the settlement period for wholesale electricity transactions.

Advances in metering that provide detailed, timely information are clearly needed to enable the NYISO to settle its markets on a near real-time basis. Yet, settlement process improvement is only one of the potential benefits of advanced metering.

At the NYISO, potential positive consequences are envisioned from an Advanced Metering Infrastructure (AMI), including the following:

A WORK IN PROGRESS
The NYISO has access to metering data for generation plants and tie lines and as a result, wholesale settlements for suppliers are rendered fairly readily. In fact, the NYISO issues daily advisory settlement statements to all of its market participants and invoices are issued within five business days of the end of each month. Retail level consumption data, however, is not readily accessible to the NYISO and this creates a need for the NYISO’s market design to incorporate an estimation process to facilitate billing. Achieving final bill closeout, or settlement, has been limited by a lack of timely, accurate metering data.

In the early years of the NYISO markets, the settlement cycle length averaged in excess of three years. While metering systems in place at market inception could have accommodated a shorter settlement cycle, the duration of settlement time was driven by retail market tariff provisions that allowed two years to obtain final meter readings of retail consumption. This extremely lengthy cycle exposed the marketplace to significant credit and collateral requirements, presenting barriers to market entry for smaller market participants, the additional burden of tracking three years of potential liabilities and revenue for financial reporting, and the shared risk of bad debt loss in the event of default prior to closing out settlements some three years later.

New York’s electricity is dispatched from the
NYISO control center

As New York’s competitive electricity market matured, settlement processes were improved within both the NYISO and the market community, the NYISO’s business processes were demonstrated to be efficient and effective, and market stakeholders gained confidence in the market. And as a result of these developments, the settlement cycle was incrementally reduced to its current average of 10 months. Although the NYISO and its market stakeholders view the cycle as still too lengthy, further shortening of the settlement cycle will require upgrading New York’s metering infrastructure.

ESTIMATING WHOLESALE ELECTRICITY CONSUMPTION AND METERING IN THE NYISO MARKET
The NYISO marketplace is divided into eleven regions, called zones. The market’s eleven zones are further divided into subzones, with one regulated utility or transmission owner per subzone. For settlement purposes, subzones are bounded by transmission line interconnections, or tie lines, and comprised of generation plants and purchasers of wholesale energy, known as Load Serving Entities (LSEs). While generation plants and tie lines are typically equipped with billing quality metering for measuring wholesale transmission and generation supply, LSEs are typically an aggregation of many retail-level end users, whose consumption is measured by metering systems maintained at the retail market level.

The NYISO’s settlement process determines regional wholesale market consumption for subsequent allocation to LSEs until their final consumption data has been submitted to the NYISO by the Transmission Owner Meter Authorities. The NYISO uses the metering data from generation plants and tie line interconnections between the subzones to determine the consumption within a subzone. The total subzonal consumption is then allocated across the LSEs within the subzone for settlement of their wholesale energy and ancillary services.

Prior to the receipt of final consumption data, subzonal consumption is allocated to individual LSEs within each subzone based on hourly forecasts provided by the LSEs in their hourly bids to purchase electricity. The hourly subzonal loads are allocated to each LSE according to the ratio of their respective hourly forecasted withdrawal to the aggregated total of the forecasted hourly withdrawals submitted by all LSEs within a particular subzone. Each LSE’s wholesale settlement is then adjusted or ‘trued-up’ to its metered retail level withdrawal data at four and six months, respectively, after the initial wholesale invoice has been issued. 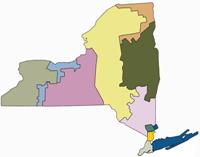 The New York State Public Service Commission (NYSPSC) has established service-class specific consumption profile methodologies that utilities use to ‘fit’ the energy consumed between monthly or semi-monthly retail meter readings to the clock-hour intervals used in wholesale market settlements. This type of profiling does not allow consumers whose consumption is not recorded in hourly increments to align their electricity consumption with the NYISO’s clock-hour interval pricing. An AMI could record retail consumption in a manner that would align with the NYISO’s pricing intervals, allowing the consumer to make price-based decisions regarding use of electricity based on real time price signals.

WORKING TOWARD A FUTURE WITH ADVANCED METERING
In order to improve the accuracy and timeliness of tie line and generation metering systems, the NYISO collaborated in 2005 with the New York State Electric Meter Engineers Committee to update the NYISO’s metering system hardware specifications and processing protocols to current industry standards. This information was documented in a Revenue Metering Requirements Manual. The NYISO is currently working with a task force comprised of the Transmission Owner Meter Authorities, other interested market stakeholders, and NYSPSC representatives to establish the administrative protocols through which the specifications detailed in the Revenue Metering Requirements Manual will be enforced.

Although improvements in tie line and generation metering infrastructure will increase the accuracy and timeliness of the NYISO’s subzonal load computation and generation settlements, the absence of AMI perpetuates the need for a six-month metering true-up cycle in wholesale energy settlements. The NYISO recognises the significant role that AMI can play in providing more timely consumption data for wholesale consumers, enabling further shortening of its settlement cycle as well as the expansion of the NYISO’s demand response programmes.

Demand response programme participants curtail use (‘load shaving’) or move use to a different time (‘load shifting’), in order to help reduce peak electricity demand in response to the NYISO’s directive signals to reduce load on either an emergency or day-ahead-notice basis. In addition to expanding its highly successful energy-based demand response programme offering, the NYISO is currently designing market products that will allow demand response providers to offer regulation and operating reserves ancillary services. A system-wide AMI can provide the necessary performance visibility, communication, and control capabilities for these programmes to be expanded as well as more efficiently incorporated into the NYISO’s energy and ancillary services markets.

Expanding demand response, enhanced technology and improved design, in conjunction with a policy-driven emphasis on energy conservation and cost saving process improvements, have elevated the issue of improved metering in the perceptions of consumers, energy suppliers and policy makers in New York State. In August 2006, the NYSPSC launched an AMI initiative that proclaimed the removal of “regulatory barriers to utility investments in advanced metering” and compelled New York’s utilities to develop structured AMI implementation plans. Further, in April 2007, New York Governor Eliot Spitzer unveiled a ‘15 by 15’ energy strategy aimed at a 15% reduction in electricity use in New York State by the year 2015.

There is a growing consensus that AMI is a core component in effectively managing and developing demand side (i.e., load management) programmes to their full potential. Comprehensive demand side programmes have the potential to produce economic and environmental benefits. AMI can play a central role in achieving the New York’s Regional Greenhouse Gas Initiative, Renewable Portfolio Standard and other power plant emission reduction goals.

The NYISO is working with the NYSPSC to explore potential synergies between the NYISO’s efforts to improve the metering infrastructure supporting the wholesale marketplace and the NYSPSC’s AMI initiative. The NYSPSC AMI initiative, with respect to retail metering, will likely initially focus on metering systems for large industrial and commercial retail access customers. The involvement of large commercial and industrial retail customers in the AMI initiative will significantly expand the available pool of participants in demand response programmes, energy efficiency initiatives, and environmentally sensitive energy management. Some large commercial entities in New York are already implementing AMI in order to participate in the NYISO’s demand response programmes.

CONCLUSION
Developments currently underway hold significant promise that a meaningful link can be established between the electric system operator control room and the end-use consumer to provide the visibility and interaction necessary for more efficient use of electricity.

By aligning generation dispatching processes with emissions tracking, the concept of smart end-use electric devices that can respond to communications that call for use curtailment or ‘prices-to-devices’ could also be expanded beyond the typical dollars-per-kilowatt price signals to include pounds of pollutant-per-kilowatt generated.

AMI can, and must, play an integral role in the NYISO’s ability to administer an efficient electricity marketplace, operate the electric system more reliably, and encourage more environmentally conscientious use of New York’s energy resources.