A quiet battle is brewing across the United States over who is allowed to generate electricity and who should have to pay for it. Since 1983, 36 states have passed regulations allowing customers to generate their own electricity and regulating how they may contribute the excess to the transmission grid. And buried within the Energy Policy Act of 2005 (EPAct), Congress recognised the potential of such programmes with the inclusion of a tiny provision requiring every state to ‘consider’ issuing net metering rules by 2008.

Yet, while net metering has been touted as helping substantially to decentralise and ‘green’ American energy sources, by 2004 only slightly more than 15,000 customers were participating in net metering programmes nationwide, with 13,000 of them in California alone. In many states, more energy has been lost crafting the tangle of rules governing interconnection and compensation than has been generated by the programmes themselves.

According to the Energy Information Administration’s (EIA) latest numbers, nine states registered fewer than 10 participating customers, and three states had programmes but no participating customers at all. In other states, net metering has been paired with aggressive state renewable portfolio standards and adopted as part of a package of incentives designed to help homeowners and small business finance on-site renewable energy generation. The first year after New Jersey restructured its net metering programme in this way, participation grew from 0 to 300 customers. In the two years since, the state has more than quadrupled installed solar capacity and the state’s Board of Public Utilities is drowning in new net metering applications. 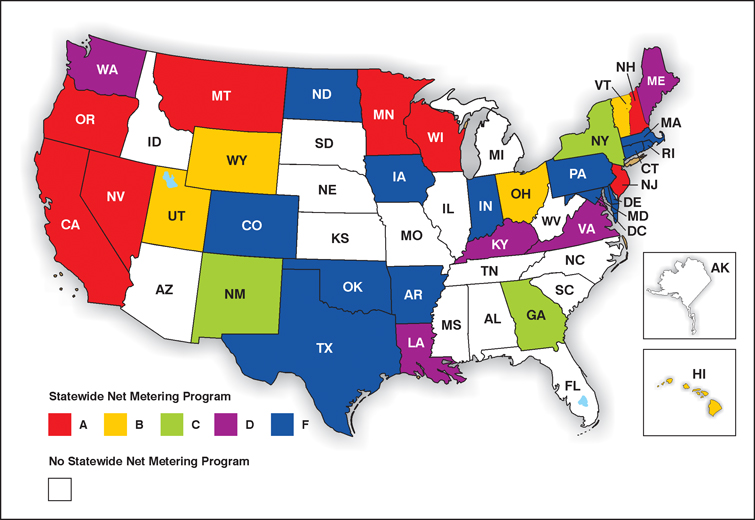 Why has net metering failed miserably in some states and been successful in others? In 2006, the Network for New Energy Choices (NNEC) sought to answer this question by comparing statewide net metering programmes with EIA data on the number of participating customers in each state. In ‘Freeing the Grid: How Effective Net Metering Laws Can Revolutionize U.S. Energy Policy’, statewide net metering programmes are ranked and graded and common barriers to customer participation are identified.

Net metering programmes often are intended to encourage investment in renewable technologies whose adoption is being delayed by market barriers. The analysis found that many states have excluded commercial or industrial customers from eligibility, apparently out of fear that these customers would substantially reduce electricity demand. Ironically, commercial and industrial customers are the most likely to benefit from net metering as an economic incentive to invest in on-site generation.

For example in Indiana, Richmond Power & Light argued that allowing commercial and industrial classes would be “disastrous and confiscatory.” ITAMCO, a conglomeration of Indiana technology and manufacturing companies, countered that on-site power generation would reduce air conditioning costs at its 9,300 m2 factory, where precision work requires specific temperature controls. ITAMCO explained that generating its own electricity would help mitigate these costs and make the company more economically competitive.

Indiana’s experience reflects how state net metering regulations may have the unintended consequences of damaging other in-state industries. Even though Indiana limited total net metering enrollment to less than 0.1% of the state’s peak summer load, the threat of even 0.1% of lost revenue was enough to justify further restrictions. The restrictions worked; by 2004, Indiana had only registered 16 customers participating in the state’s net metering programme.

When net metering customers generate more electricity during a billing period than they consume, some states allow customers to “bank” the excess generation by directing utilities to provide credits that may be applied to subsequent billing periods. Many states differ on how long credits are allowed to be carried forward and whether (and how) customers should be compensated for any credits at the end of an annual billing cycle.

In Minnesota (the first state to adopt net metering), customers are credited for net excess generation (NEG) each month and at the end of a year regulated utilities must purchase NEG at the utility’s average retail rate minus fixed costs. Minnesota and Wisconsin are the only states that currently require utilities to purchase NEG at the retail rate. In other states, in Arkansas for example, regulated utilities argue that crediting net metered customers for NEG would allow them to become quasi-power suppliers subsidised by non-participating customers.

Despite strong objections from the state’s Attorney General, the Arkansas Public Service Commission (APSC) ruled that NEG should be donated to the utility at the end of every monthly billing cycle. Restrictions on banking NEG are more a function of utility billing cycles than energy policy. When a net metered customer is generating more electricity than the on-site load, the excess is contributed to the grid and sold by the utility at retail rates to other customers.

The utility is therefore collecting the fixed costs associated with those units of electricity from the customers actually consuming them. To charge the generators for those fixed costs as well would allow the utility to collect twice for the same service. Moreover, net metered customers subsidise grid reliability in at least two ways: First, many renewable energy systems (particularly solar PV systems) generate excess electricity during periods of peak demand.

On hot summer afternoons, net metered PV systems are not only contributing to grid stability by reducing demand, they are producing electricity that offsets the most expensive peaking reserves that must be tapped during periods of system strain. Second, inverter-based net metered systems produce nondispatchable reactive power (VARs) that helps meet the nonutility power factor loads of other customers and contributes to overall system stability.

Some studies suggest, for example, that more dispersed interconnected PV systems could have mitigated or even prevented the cascading grid failures that evolved into the massive August 14, 2003 blackout. Utilities are not just selling electricity. They are selling reliability. Utility customers pay for the security of knowing that adequate energy will be available to them each and every time they plug in.

The rapid growth in customer participation in New Jersey can be traced to the unique approach the state took when it amended its net metering regulations in 2004. Unlike many states, New Jersey did not seek a consensus from stakeholders on proposed regulations. Instead, the New Jersey Board of Public Utilities (NJBPU) investigated the fact-based concerns of regulated utilities and tested proposed rules based on whether they furthered or hindered the goal of expanding statewide distributed generation. 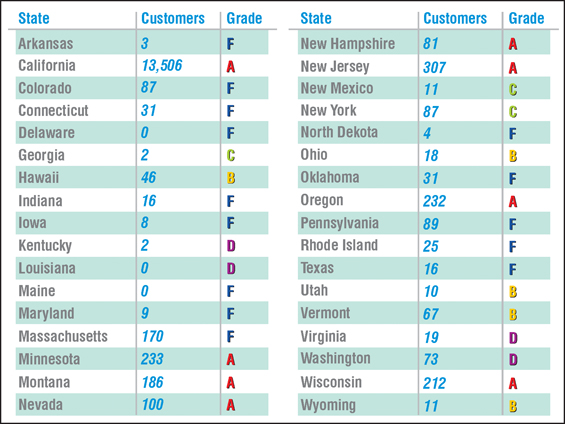 New Jersey’s utilities were concerned that net metered systems presented a safety hazard for line workers who could come into contact with “islands” of live wires that continue to produce electricity from interconnected systems, even when the central grid loses power or shuts down. Utilities insisted that net metered customers be required to install and test external shut-off switches and make them accessible to utility workers. Customers argued that the switches were redundant with internal safety devices and merely added unnecessary costs to installations.

The NJBPU commissioned an independent interconnection expert to investigate the issue, whose report revealed that external shut-off switches were not only redundant with internal safety devices already included in most modern inverterbased systems, but that line workers rarely, if ever, accessed them. In addition, the added expense of external switches had created in some states an unintentional economic incentive for customers to connect unauthorised systems, presenting a much greater safety concern to workers. In the end, New Jersey rejected the requirement for an external shut-off switch and helped pave the way for customer-friendly interconnection standards that better protect utility workers.

In addition and based partially on recommendations from NNEC, the Interstate Renewable Energy Council (IREC), the Vote Solar Initiative and Sun Edison, Congressman Jay Inslee (D-WA) has introduced the Home Energy Generation Act (H.R. 729), which charges each state with adopting a net metering programme and sets uniform standards for interconnection and compensation. Such a national programme should provide a level of regulatory predictability that is more attractive than a network of 50 different state regulatory schemes.