The OpenAMI industry task force took steps recently that will shorten its path to an open standards solution for advanced metering infrastructure (AMI) by many months.

At the March meeting in Los Angeles, OpenAMI agreed to publish to its members a set of use cases and requirements developed by Southern California Edison. Edison developed the material as part of its ongoing AMI project, based in part on OpenAMI’s initial list of AMI use cases produced earlier last year.

By ‘returning’ the use cases to OpenAMI fully fleshed-out and accompanied by a list of Edison’s requirements for an AMI system, Edison has provided a major contribution to OpenAMI’s goals. The task force will now have this work reviewed and ratified by its utility members, and can move more quickly from developing requirements to designing the reference data model for AMI systems.

At the March meeting, OpenAMI agreed to focus its data modelling efforts on the two interfaces of an AMI system that were identified as priorities by UtilityAMI. UtilityAMI is the oversight committee for OpenAMI within the UCA International Users’ Group, consisting only of utility members and formed to provide a clear vision of utilities’ requirements to AMI vendors. UtilityAMI identified two key interfaces as priorities for standardisation:

• Between the meter and communications ‘board’ at the customer site.

• Between the AMI network and various utility clients, as illustrated in Figure 1.

OpenAMI began this work in the March meeting by identifying a list of candidate technologies for each of these interfaces, challenges that exist for implementing them, and questions that need to be answered before proceeding. UtilityAMI in turn addressed these questions when they met recently at the Metering America conference.

Through this dialogue, both groups concluded that although several open standards already exist that can be applied to AMI, it is too easy for vendors to implement them in ways that are not interoperable. Both groups agreed that OpenAMI’s goal in the next several months should be a set of guidelines for implementing existing standards to prevent such problems. 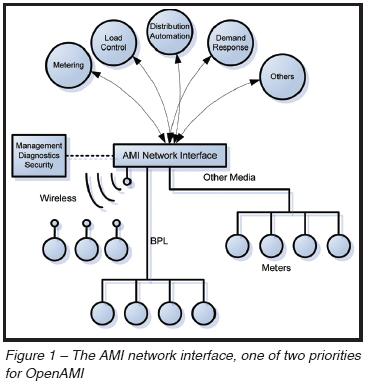