OpenAMI, the task force that has taken on the job of specifying an open environment for advanced metering and demand response, achieved a significant goal by describing its first simplified model of how an advanced metering infrastructure (AMI) should work. This scenario represents the first concrete steps toward a common reference design that will permit multiple vendors’ products to interoperate at multiple levels, opening up markets for vendors, increasing flexibility for utilities, and reducing costs for ratepayers.

The OpenAMI task force, consisting of representatives from utilities, vendors, integrators and consultants from across the metering and communications industries, had previously agreed on a set of common design principles for AMI systems and recommends that these principles be used when evaluating AMI and demand response systems.

Along with these principles, the group agreed on a basic ‘context’ diagram representing all the major players or ‘domains’ involved with an AMI system (Figure 1). With these design principles in mind, OpenAMI next identified 16 different scenarios, or ‘use cases’ that would describe how such systems would be used. The scenarios cover a wide range of utility functions – the complete list can be found on the web site. 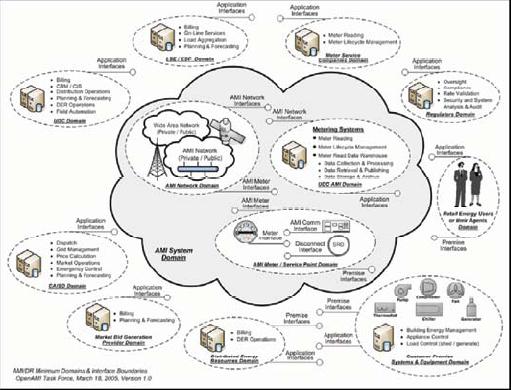 At their meeting on 11 January, the task force finished describing the first of these scenarios, covering basic automatic retrieval of customer consumption data. The model of the AMI system described in this scenario is Figure 1 – OpenAMI domains intended to identify a set of ‘actors’ and interfaces that can be used to model any existing AMI system, regardless of the technology or network topology used. Different vendors will implement the actors in different groups, on different devices or computer systems. However, when the reference design is completed, all these different designs should be able to interoperate because the interfaces will be the same.

The actors and interfaces were identified in the consumption data reading scenario; the scenario itself is a set of numbered steps and a text narrative that will shortly be posted on the OpenAMI web site.

This first simplified model of an AMI system is a major step forward for a group whose mandate requires opening up an industry currently dominated by proprietary systems. The next steps for the OpenAMI task force, besides completing the rest of the scenarios, will be to begin defining the data models and examining the candidate technologies for implementing each of the interfaces that were identified. The current schedule is for this work to be completed by the end of 2006.