Utilities the world over are influenced by regulatory bodies, whether they are in liberalised markets or not. Regulatory bodies in Europe and in North America are shaping how markets perform and creating or blocking opportunities for emerging technologies and/or pricing programmes to debut and eventually commercialise. This can be evidenced by taking a look at the historical ramifications of regulation in North America and in Europe.

Electricity and natural gas deregulation in the United States was occurring on a state-by-state basis. In the mid and late 1990s several states with the highest electricity rates in the nation began to open their retail electric markets under pressure from industrial customers and the negative impacts high rates were having on economic development efforts. New Hampshire was the first state to launch a pilot programme in 1996, and California and Pennsylvania soon followed.

Today, the liberalisation of the energy markets in the United States has stalled. Some states have suspended retail choice altogether, while others have ceased efforts to open the markets. The regulatory emphasis lately has been on rate cases for regulated utilities and for distribution utilities operating in deregulated environments, mergers and acquisitions, advanced metering, and specialised programmes designed to reduce or shift load. 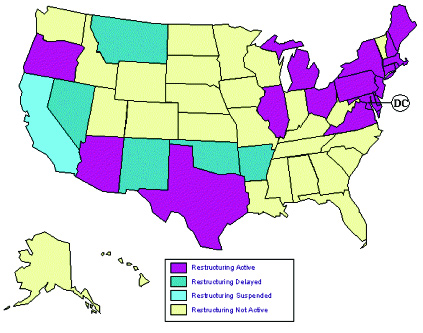 Electric liberalisation in Canada was occurring on a province-by-province basis (much like the United States). At this point, only Alberta and Ontario have deregulated their electricity markets, which occurred in January 2001 (Alberta) and May 2002 (Ontario). None of the other Canadian provinces has taken any definitive steps toward deregulating their electricity markets and instead are approaching deregulation from a ‘wait-and-see’ perspective.

Part of this reticence toward liberalisation among other Canadian provinces relates to the generally low energy prices across the country, and to the fact that the regions within the nation are vast and rather isolated from each other, making the issue of transmission interconnection a challenge. Ontario is an exception – the province has experienced swings in its prices and is interconnected with other provinces and the United States.

Ontario is the most populous Canadian province, home to 11 million people with an average power usage of 155 terawatt hours a year, and representing a $10-billion electricity market. The three main utilities in Ontario are Ontario Power Generation, the former Crown-owned utility formed by the replacement of Ontario Hydro Services Company with separate commercial companies in April 1999, which currently controls a total generating capacity of approximately 25,800 MW; Ottawa Hydro, which is owned by the city of Ottawa; and Toronto Hydro, which was created as a result of the convergence between six utility companies serving the province. Toronto Hydro consists of a transmission and distribution unit and an energy services company, but owns no generation of its own.

Deregulation of Ontario’s natural-gas market took place in the late 1980s. Following plans that had been in the works since at least 1998, electricity deregulation in Ontario was originally scheduled to begin in November 2000, although it was postponed another 18 months due to concerns from officials after witnessing the well-documented problems in California. Energy Minister Jim Wilson reportedly was also concerned about Alberta’s experience with electricity deregulation.

Competition in Alberta’s wholesale and retail power market began on 1 January 2001, a time at which wholesale prices for natural gas were staggeringly high. High demand and short supply in Alberta caused rates in the province to double immediately upon the onset of deregulation, a development that has naturally given pause to other Canadian governments. Natural gas and electricity prices in Alberta have since fallen dramatically, as elsewhere in North America, but not before the Alberta government was forced to give hefty rebates to customers to compensate for the sharp increases.

Under Ontario’s evolving deregulation plan, retail markets will remain under the oversight of the Ontario Energy Board, the provincial power regulator, and will open at the same time as wholesale markets. Under the retail system, customers will have the option of arranging their electricity purchases directly from suppliers at fixed-price contracts, or having energy purchased for them by distribution companies, agents, brokers or marketers at fluctuating prices.

The retail power prices were capped by the previous Premier of Ontario, Ernie Eves, which in effect ‘killed’ retail competition in the province. The move by Canadian elected officials had been called necessary to preserve the government of Premier Ernie Eves. Eves has since been replaced by new Premier Dalton McGuinty, who is slowly opening the market again to industrial customers first. Residential prices are beginning to creep back up – as from 1 April 2004, households and other low volume consumers who were paying the capped commodity price of 4.3 cents per kWh pay 4.7 cents per kWh for the first 750 kWh they use each month, and 5.5 cents per kWh after that. These commodity rates will stay in place until the Ontario Energy Board introduces a new pricing structure in May 2005.

With this capping of the market, regulators in Ontario are also watching the advanced metering and demand response pilot programmes in California. A strong emphasis is being put on energy efficiency and shifting of load, as opposed to liberalisation.

One result of the liberalisation process which began in Europe in the 1990s is that electricity can now be traded across borders in an open competitive market, according to Eurelectric, the trade association for European electricity utilities. Competitive activities in the sector include generation (power production) supply and trading, whereas network activities – transmission and distribution – are still by their nature regarded as natural monopolies to be operated under regulated conditions.

The liberalisation of the electricity sector has created a new competitive environment in which the power generation business is fully open to competition, and already millions of industrial and household consumers are entitled to freely choose their power supplier. Some 70% of all consumers in the European Union now have this right of choice. The recent adoption of a new EU ‘accelerated liberalisation package’ will result in full liberalisation of the internal EU electricity and gas market, in two steps. As from 1 July 2004, all non-household customers (industrial, commercial and professional customers) were free to choose their supplier, while all households will gain this right at the latest on 1 July 2007.

While large industrial customers are designated as eligible throughout the EU, competitive mass retail markets are for the moment developing in Sweden, Finland, Norway, Denmark, Germany, Austria, the Netherlands and the United Kingdom.

While it is beneficial to review the history of regulation and liberalisation in various countries and continents, it is interesting that North America and Europe appear to be heading in different directions from a regulatory perspective. The European Union appears to be heading for full liberalisation by 2007. This in turn will result in:

Meanwhile, North America is focused on rate cases for regulated utilities and for distribution utilities operating in deregulated environments; mergers and acquisitions; advanced metering; and specialised programmes designed to reduce or shift load. This is in response to the failed attempt at liberalisation in California, the lack of a standard wholesale marketplace, and an environmental push to ‘clear the air’ emission-wise. Demand response is quickly becoming a regulatory alternative to new transmission and/or generation. This in turn will result in: