Edna and Bill Thompson (not their real names) live in a two-bedroom apartment in Brooklyn, New York. Until last fall, the Thompson’s electricity usage was metered in aggregate with their neighbors, at the master meter for the 250-unit building.

In November 2002, the Thompson’s building was outfitted with new, advanced submeters, partially funded under a New York State Energy Research and Development Authority (NYSERDA) incentive programme. These meters now collect 15-minute interval data from each apartment, and the data is downloaded daily. Instead of paying a pro rata share of the entire building’s electricity bill, the Thompsons are now billed each month for their actual usage.

This system has caused Edna and Bill (as well as their neighbours) to rethink their energy usage behaviour. Because they are responsible for their own electricity use, they turn off lights when they leave the room. They run their electric dishwasher only when it is full. And this summer, they will be sure to raise the temperature setting or turn off their air conditioners when they leave their apartment. These energy saving efforts will help each apartment in the Thompson’s building save an average of 1,469 kilowatt-hours each year, reduce building peak demand by an average of 400 watts per apartment, and save each resident about $159 per year in electricity costs.

The New York Public Service Commission (PSC) regulates how utilities charge for electricity in New York State. Rental property owners must first apply for PSC approval before implementing a submetering project. Master-metered co-operatives and condominiums are allowed to submeter without PSC approval once a canvass of residents results in at least 50% voting in favour of submetering and a dispute resolution process is put in place. For direct-metered co-operatives and condominiums, the requirement is that at least 70% of the shareholders/unit owners voted in favour of submetering, with the same dispute resolution stipulation. The PSC submetering approval process involves staff review, a 45-day public comment period, and approval by the Commissioners. 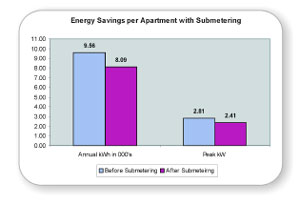 Master-metered building owners usually include the cost of electricity in the rent they charge tenants. When an apartment is submetered, the rent must be reduced by some amount to allow for the fact that electrical costs will now be billed separately. This is accomplished through a rent-reduction formula. The NYS Division of Housing and Community Renewal (DHCR) is the agency that administers rent regulatory programmes in New York State, with the authority to approve or disapprove submetering conversions in rent-regulated housing.

DHCR is in the process of promulgating regulations governing electrical conversion applications. NYSERDA has worked with DHCR to verify the data previously used to formulate a new rent reduction formula for use in conversions from master-metering to direct metering and master-metering to submetering.

A unique element of CEM is an Internet-based electronic backbone that NYSERDA is building to remotely read the interval metering data and disseminate energy usage information to residential customers. This system will allow residential customers to look up their usage and load profiles on-line, to better understand how and when they use energy. They will also be able to respond to variable rate electricity pricing and benefit from load aggregation under utility deregulation. NYSERDA believes that this data collection and dissemination effort, combined with residential variable pricing, is the first of its kind to be undertaken by a public, non-utility organisation.

• Promote improved metering technology that, within the proper regulatory and market environment, can be used to educate residential energy consumers on how they use energy and help them lower their energy costs.

• Foster a regulatory environment that encourages consumers to become more energy efficient, by ensuring that the end-user is directly responsible for energy use and providing new rate choices such as time-of-use and real time pricing.

• Encourage large-scale market acceptance of advanced metering by providing education on the benefits of the technology; standards to ensure that advanced metering systems operate as intended; incentives to help offset the cost of the systems; and data acquisition to obtain competitive pricing and value-added services for residential customers.

Since its introduction in March 2001, CEM has been successful in driving the advanced metering market in New York’s multi-family buildings market (See Table 1). A number of leading firms have taken advantage of CEM incentives to install their equipment, including Comverge Technologies, EMON, Intech 21, Osaki Meter Sales, OSC Intellimeter and Quadlogic.

NEXT STEPS AND NEW DEVELOPMENTS

CEM’s next steps are to expand the reach of advanced metering and direct load control technology into single-family homes, and leverage the interval data into variable pricing for residential consumers. In the spring of 2003, NYSERDA will launch a pilot project with 200 residential homeowners. Using a whole-house approach to energy efficiency, the participants will be given a complete home energy audit through NYSERDA’s Home Performance with ENERGY STAR® Programme. Comprehensive building performance measures are funded with NYSERDA easy-to-access low-interest loans. Participants will also be provided with an advanced meter, which will track the benefits of the upgrades the homeowner makes as a result of the audit and collect interval data to be used with a new variable rate structure that NYSERDA will test as a part of the pilot.

Other pilots currently being conducted under CEM are addressing such issues as technology integration, where advanced metering and direct load control are accomplished through the same device; regulatory reform, to encourage the introduction of alternative, time-sensitive pricing structures in the New York market; and customer education, to help residential stakeholders better understand the benefits of advanced metering and direct load control.

MEANWHILE, BACK IN BROOKLYN

Remember Edna and Bill? Now that they have had their new advanced meter for a few months, they have adjusted their energy-usage behaviour to best minimise their electricity costs. Soon they will become among the most sophisticated residential energy consumers in the State. For the first time they will be able to track their electricity usage on-line and have access to energy saving tips and strategies that can help them save even more money. And now that the advanced interval metering technology is in place, the Thompsons will be among the first group of New Yorkers to choose how much electricity they use in response to variable rate pricing.

With the launch of deregulation, NYSERDA believes that the public benefits gained through advanced metering are compelling. Working with key state and local agencies and industry experts, NYSERDA continues to overcome the policy, regulatory and market barriers that have inhibited the full rollout of advanced metering technology – technology that, coupled with NYSERDA’s efforts to capture and make usage information accessible, will help the residents of New York State save energy, reduce their costs and fully participate in the new energy marketplace.