In the West Indies, the two-island country of St Kitts and Nevis is modernizing its grid based on smart meters, a SCADA system and distributed energy in a bid to cut energy costs for residents.

The state-owned St Kitts Electricity Corporation (SKELEC), which approved a full-scale rollout of Landis+Gyr smart prepaid meters last month, released results of a study this week into the optimum level of renewable energy in its energy mix.

At a government-sponsored event, Cartwright Farrell, CEO of SKELEC, said the report recommends a 20% infusion of renewable energy based on the utility’s current operating conditions.

Mr Farrell said: “This is by no means a hard ceiling. We can accommodate more in the future but we prefer to take a responsible approach while we retain the confidence of the customer in SKELEC’s service. As time goes by we will gradually increase the infusion level and retain steady state operation.” 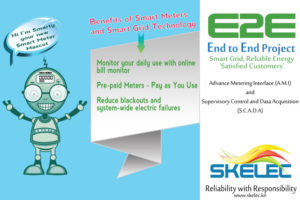 Mr Farrell said that SKELEC is about to roll out its smart meter programme and SCADA system in “an effort to smarten the grid”.

He said: “With the smart meters we will read meters remotely without anyone having to go out to the meter. There will be a function added where the customer can prepay for their electricity much like the telephone concept.”

Farrell pointed out that for the SCADA system, SKELEC will be able to restore power to all areas remotely from the power station.

He said: “This cuts down on the outage time for customers. The outage will report itself back to the operator right away so again response is swifter. This will lead to an outage management system. Overall the integration of renewable energy will be better facilitated.

“The SCADA portion of the end-to-end project will facilitate distributed generation such as the model that obtains with renewable energy generation and which is the future model of electric utilities.”

Last week, the two islands hosted an energy week where the Ministry of Energy pushed a message of how awareness and education are the most important means to encourage energy efficiency in homes, according to local newspaper St Kitts & Nevis Observer.

However, Dr Leighton Naraine, a lecturer at the Clarence Fitzroy Bryant College, said customers’ behavior is more likely to change when they can see or experience tangible benefits.

He also indicated that some level of incentives could be used to accelerate changing behavior, as well as the sharing of energy data, and the analysis of data helpful to consumers.

One feature he believes would help consumers manage their energy consumption is the smart meter pre-paid function.

“It is something like the prepaid cell phone, pay-as-you-go, where you can decide how much you would pay for electricity in a month. “The meter looks at your consumption history, and would tell you how long any given dollar amount would last,” the SKELEC CEO explained.