By Meir Shargal and Doug Houseman

NERC CIP offers a way to determine which systems need the most security to maintain the grid and protect customers from outages and companies from bad information. In 2003, a young Italian figured out how to “hack” into Enel’s metering system and change what the meter reported to Enel for settings in the meter. These changes to the meter reporting reduced the bills of those people who used it. This hack was posted on the internet and Enel made changes to their meters to prevent the hack from working in the future.

This is just one example of how a smart metering system can be hacked. One of the US national labs has been working to determine what the vulnerabilities are in the grid, and released a video recently of a cyber attack on a small diesel generator that resulted in the destruction of the generator. With disconnects and home area networks (HAN) being installed in meters and in customers’ homes, securing the meters and the networks that support them is getting to be more important. In 2000 there were very few meters anywhere that had the ability to impact devices that used electricity on the grid. By the end of 2008 there will be more than a million smart meters with disconnects or HAN installed in customer locations. This is just the tip of the iceberg and by the end of the year there will be more than 15 million meters on order for installation that contain these capabilities. Security will have to move from using obscure protocols to real planned security.

In North America a group of utilities have formed a working group AMI-SEC, under Utility AMI, which is responsible for determining security requirements for the member utilities. Together these utilities are responsible for more than 20% of the meters in the region (US, Canada and Mexico) and many are in the lead in installing meters. Some of the material in this article has been used in the Utility AMI and AMI-SEC meetings. 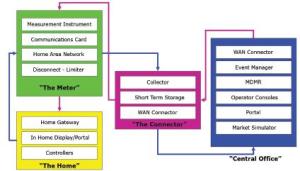 Complexity
Smart meters have got complex, and they are no longer a measurement instrument attached to a display, with magnets and shunts the major ways to spoof the resulting measurements. Instead they are made up of many components that include electronics and computers with all the same vulnerabilities that any other electronics or computers would have (Figure 1).

Where there are multiple communication links there are multiple locations that have potential openings for hackers and others. This system is complex enough that the US National Institute for Standards and Technology (NIST) has developed two standards that deal with control systems that are being applied to smart metering, NIST 800-53 and NIST 800-82. This complexity has meant that at most utilities that are looking deeply into security it is the information technology (IT) security team that is brought into the security review. At some utilities there is a move to add outside security experts and even “white hat” hackers – people who work for corporations and only hack at the request of corporate customers.

The HAN opens the biggest issues for most utilities. HAN standards are readily available to the public and any one can read the standards. The ZigBee Smart Energy standard is over 5 centimetres thick. While it passes muster today, as a standard and as an implementation, the devices that are being deployed are expected to be in place for 20 years or longer. Most operating systems and most security measures have to be replaced in the computer world long before 20 years, with a more likely cycle of 3 to 5 years in the computer industry and 8 to 10 years in the industrial controller world. This 20-year window gives interested parties a long window to find holes in the security in the HAN and use it to exploit the HAN and possibly the smart metering system. Vendors are adding many of the same features to HAN devices that are being added to commercial networks connected to the internet, including firewalls and encryption, to minimise the damage that a hacker can do. They are also making it possible to upgrade the firmware in the devices remotely over the network. This is a two edged sword, as it means that the owner of the network can upgrade the devices remotely and introduce new features and new security, but hackers, if they can figure out how to get into the network, can install Trojans or other malware into the devices and take control of them.

Attack vectors
Malware is not the only attack vector to the smart meter, and there are many of them. The AMI-SEC threat model dated January 2008 developed the following list of attack vectors, most electronic in nature, but some purely physical. The list includes:

This list offers a security professional a lot to think about. Each attack vector offers different impacts to the smart meter system and the range of damage that the hacker can do. In a physical attack the attacker has to get to each and every device they want to destroy and disable or destroy them. In a riot, it might be possible to get large numbers of people to destroy meters, but in normal circumstances physical attacks will be limited to small numbers of meters at a time by an attacker. On the other end of the scale is the installation of self-replicating malware that can take over or corrupt the whole system over time. Malware, as corporations have learned with personal computers, can take many hours to remove from all the corrupted machines. In the case of smart meters, the number of meters will typically exceed the number of PCs by two orders of magnitude and if the HAN is included it can easily be three orders of magnitude. A typical utility with 1 million customers typically has less than 10,000 PCs, but they would have 1 million meters and up to 30 million HAN devices in a fully mature installation. A paranoid person can easily come up with end of the world situations for most of the attack vectors. The good news is there are actually people working to close the holes that are in the smart metering systems based on the attack vectors. 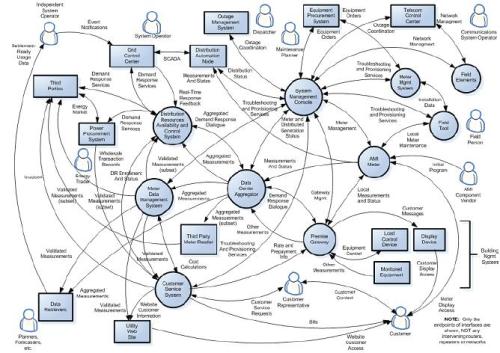 In any system it is important to realise where the data gets into and out of the overall network of systems and who has access to the various pieces. Each piece needs the right security (physical, cyber, people, and process) around it to ensure that someone internal to the organisation or a legitimate user of the system does not hijack it for non-official reasons.

Conclusions
It is impossible in a short article to discuss all the issues, and this article does not even attempt to do so; rather it is an attempt to inform people that there is an issue with security that needs to be looked at.

The following steps to a secure smart metering system are recommended:

Keeping this list in mind will significantly reduce your chance of making headlines in newspapers and websites around the world.