New York State (NYS) has had difficulty relying on the integrity of its existing supply and grid network to meet the ever-increasing electrical demands imposed by its energy consumers. This problem is magnified in the New York City metropolitan area, where the existing infrastructure is insufficient to bring in additional power from outside sources. Major users of electricity in this region include the vast number of large multi-family residential developments, many of which were built as master metered buildings in order to minimise initial construction costs.

New York State has recognised this problem and has developed programmes through its energy agency, New York State Energy Research and Development Authority (NYSERDA) to promote conservation and assist in the development of on-site generation. However, the barriers to the implementation of these conservation measures continue to limit the effectiveness of these programmes, and to minimise their widespread implementation within the multi-family residential sector.

The implementation of both electrical submetering and cogeneration is of particular value to the large, multi-family residential building sector. Both these technologies offer sound solutions to master metered residential buildings which need to reduce their operating costs.

In order to promote the implementation of electrical submetering and cogeneration, NYSERDA offers both technical assistance and substantial financial incentives to residential buildings to evaluate and subsequently install these types of system, using Comprehensive Energy Management (CEM) and Combined Heat Power (CHP) programmes. New York State also encourages many of its directly metered residential buildings to convert to master metering by making them eligible to participate in CEM and CHP programmes.

Master metered buildings consume approximately 20% more electricity than either directly metered or submetered buildings, because the apartment residents are not financially accountable for the electricity they consume. The charge to individual apartments is typically based on apartment size, and there is no correlation between usage and cost. Building owners or co-operatives have two options available to change this process and to transfer the financial accountability to the apartment residents – by converting to either submetering or direct metering.

The advantages of submetering over direct metering include:

Only in master metered buildings is the apartment sector electric load available for the cogeneration equipment. The advantages of direct metering over submetering are:

As the barriers to submetering become what seems to be insurmountable, building owners and board members may be forced to choose between direct metering and cogeneration, as both technologies combined are typically not compatible or cost effective. It is therefore in the best interests of both submetering equipment manufacturers and cogeneration equipment manufacturers to work together in order to overcome these barriers.

A major source of the existing barriers stems from some of the rules and regulations imposed by the New York State PSC. Ironically, the PSC has jurisdiction over NYSERDA and has delegated this agency to manage over $150 million annually, collected from the Systems Benefit Charge (SBC) Fund which rate-payers pay as part of their utility bill, to develop conservation programmes. On the other hand, with the intention of serving the public, the PSC adopts and enforces some regulations which tend to hamper NYSERDA’s efforts.

Some specifics examples include: 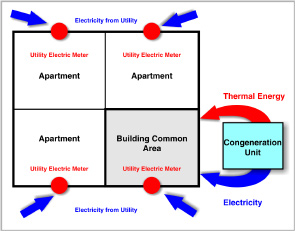 New York State legislatures must recognise that in order to decrease the state’s electrical demand, they must act to remove as many of the obstacles to implementation of submetering as possible. A simple solution is to mandate that all master metered buildings implement submetering, which was one of the recom-mendations offered by a panel of experts asked to study the barriers to submetering imple-mentation in 1996. This ruling would take considerable pressure off building owners, BoDs and politicians, as the matter would be taken out of their hands. A good initial step in improving the process at this time would be to minimise the role of the PSC. 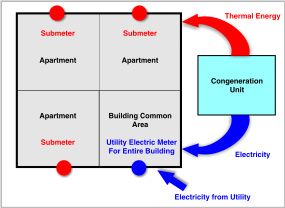 While submetering technology has moved forward at an impressive pace, many of the regulatory barriers which were identified by NYSERDA years ago continue to impede the submetering process.