In the United States and many other countries, modernisation of the electric power grid is central to national efforts to increase energy efficiency, transition to renewable sources of energy, reduce greenhouse gas emissions, and build a sustainable economy that ensures prosperity for current and future generations. Around the world, billions of dollars are being spent to build elements of what ultimately will be “smart” electric power grids.

In the United States, the transition to the smart grid already is under way, and it is gaining momentum as a result of both public and private sector investments. The American Recovery and Reinvestment Act of 2009 (ARRA) includes $11 billion in investments made available by the US Department of Energy (DOE) to “jump start the transformation to a bigger, better, smarter grid.”

Nearly 80% of the US electrical grid is owned and operated by about 3,100 private sector utilities, and the equipment and systems comprising the grid are supplied by hundreds of vendors. Transitioning the existing infrastructure to the smart grid requires an underlying foundation of standards and protocols that will allow this complex “system of systems” to interoperate seamlessly and securely. Establishing standards for this critical national infrastructure is a large and complex challenge.

Recognising this, Congress assigned the responsibility for coordinating the development of interoperability standards for the US smart grid to the National Institute of Standards and Technology (NIST) in the Energy Independence and Security Act of 2007. NIST, a non-regulatory science agency within the US Department of Commerce, has a long history of working collaboratively with industry, other government agencies, and national and international standards bodies in creating technical standards underpinning industry and commerce.

There is an urgent need to establish standards. Some smart grid devices, such as smart meters, are moving beyond the pilot stage into large scale deployment. DOE investment grants will accelerate this. In the absence of standards, there is a risk that these investments will become prematurely obsolete or, worse, be implemented without adequate security measures. Lack of standards may also impede the realisation of promising applications, such as smart appliances that are responsive to price and demand response signals. In early 2009, recognising the urgency, NIST intensified and expedited efforts to accelerate progress in identifying and actively coordinating the development of the underpinning interoperability standards.

NIST developed a three-phase plan to accelerate the identification of standards while establishing a robust framework for the longer term evolution of the standards and establishment of testing and certification procedures. In May 2009, US Secretary of Commerce Gary Locke and Secretary of Energy Steven Chu chaired a meeting of nearly 70 executives from the power, information technology, and other industries at which they expressed their organisations’ commitment to support NIST’s plan.

Phase 1 of the NIST plan engaged over 1,500 stakeholders representing hundreds of organisations in a series of public workshops over a six month period to create a high level architectural model for the smart grid, analyse use cases, identify applicable standards, gaps in currently available standards, and priorities for new standardisation activities. The result of this phase, “Release 1.0 NIST Framework and Roadmap for Smart Grid Interoperability,” was released for public review in September 2009.

Phase 2, now underway, is establishing a more permanent public-private partnership, the Smart Grid Interoperability Panel, to guide the development and evolution of the standards. This body will also guide the establishment of a testing and certification framework for the smart grid, which is Phase 3 of the NIST plan.

SMART GRID RELEASE 1.0
Reference model
The smart grid is a very complex system of systems. There needs to be a shared understanding of its major building blocks and how they inter-relate (an architectural reference model) in order to analyse use cases, identify interfaces for which interoperability standards are needed, and to develop a cyber security strategy. The reference model identifies seven domains (bulk generation, transmission, distribution, markets, operations, service provider, and customer) and major actors and applications within each. The reference model also identifies interfaces among domains and actors and applications over which information must be exchanged and for which interoperability standards are needed. The reference model will be further developed and maintained by a Smart Grid Architecture Committee within the Smart Grid Interoperability Panel.

One aspect of the reference model related to metering is the distinction made between the “meter” and the “energy services interface.” At a minimum, meters need to perform the traditional metrology functions (measuring electricity usage), connect or disconnect service, and communicate over a field area network to a remote meter data management system. These basic functions are unlikely to change during the meter service life of 10 years or more. More advanced functions such as communication of pricing information, demand response signalling, and providing energy usage information to a home display or energy management system are likely to undergo significant change as innovations enabled by the smart grid occur and new applications appear in the market. The reference model associates these functions with the energy services interface to allow for the possibility of rapid innovation in such services without requiring that they be embedded in the meter.

Initial standards
The draft Release 1.0 framework identifies 31 existing standards that support smart grid development. The standards address a range of functions, such as basic communication protocols (e.g. IPv6), meter standards (ANSI C12), interconnection of distributed energy sources (IEEE 1547), information models (IEC 61850), cyber security (e.g. the NERC CIP standards) and others. An additional 46 standards are identified as candidates for inclusion in the Release 1.0 framework pending further review. The standards identified are produced by more than 20 different standards development organisations at the national and international level, such as IEC, ISO, IEEE, SAE, IETF, NEMA, NAESB, and many others.

An example of one of these issues pertains to smart meters. The ANSI C12.19 standard, which defines smart meter data tables, is one of the most fundamental standards needed to realise the smart grid. Unless the data captured by smart meters is defined unambiguously, it will be impossible to create smart grid applications that depend on smart meter data. The existing ANSI C12.19 standard defines over 200 data tables but does not indicate which are mandatory. Different manufacturers have implemented various subsets of the standard, presenting a barrier to interoperability. In addition, the standard permits manufacturerdefined data tables with proprietary functionality that is not interoperable with other systems. To address this problem, one of the 16 priority action plans defined in the NIST roadmap is working to update the ANSI C12.19 standard to define common data tables that all manufacturers must support to ensure interoperability.

The update to the standard is expected to be available during 2010; however, manufacturers will require lead time to implement the revised standard. In the meantime, smart meters are in the process of being deployed and public utility commissions are concerned that they may become obsolete. To address the issue, NIST requested that the National Electrical Manufacturers Association lead a fast-track effort to develop a meter upgradeability standard. Developed and approved in just 90 days, the NEMA Smart Grid Standards Publication SG-AMI 1-2009, “Requirements for Smart Meter Upgradeability,” is intended to provide reasonable assurance that meters conforming to the standard will be securely field-upgradeable to comply with anticipated revisions to ANSI C12.19.

Other priority action plans that are underway to accelerate and coordinate the work of standards bodies include:

CYBER SECURITY
Ensuring cyber security of the smart grid is a critical priority. Security must be designed in at the architectural level, not added on later. An NIST-led Cyber Security Coordination Task Group consisting of more than 200 participants from the private and public sectors is leading the development of a cyber security strategy and requirements for the smart grid. The task group is identifying use cases with cyber security considerations; performing a risk assessment including assessing vulnerabilities, threats and impacts; developing a security architecture linked to the Smart Grid conceptual reference model; and documenting and tailoring security requirements to provide adequate protection. Results of the task group’s work to date are described in a publication NIST IR 7628 (draft).

The advanced metering infrastructure (AMI) is a key part of the smart grid that has raised security concerns. AMI security is being addressed by the Advanced Security Acceleration Project – Smart Grid. The ASAP-SG is a collaborative effort of EnerNex Corporation, multiple major North American utilities, NIST, and DOE, including resources from Oak Ridge National Laboratory and the Software Engineering Institute of Carnegie Mellon University. A detailed set of security requirements for the AMI are included in NIST IR 7628 (draft). 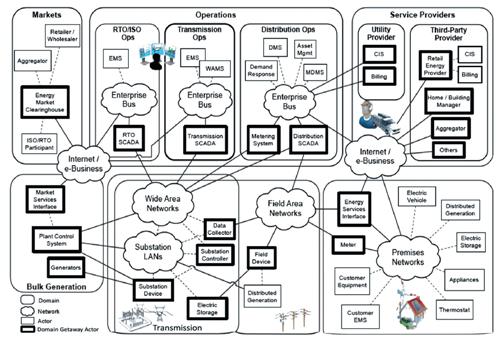 LOOKING AHEAD
The reference model, standards, gaps and action plans described in the NIST Release 1.0 Smart Grid Framework and Roadmap provide an initial foundation for a secure, interoperable smart grid. However this initial document represents only the beginning of an ongoing process that is needed to create the full set of standards that will be needed and to manage their evolution in response to new requirements and technologies.

In Phase 2 of the NIST smart grid programme, a publicprivate partnership, the Smart Grid Interoperability Panel (SGIP) is being formed to provide a more permanent organisational structure to support the ongoing evolution of the framework. The SGIP provides an open process for stakeholders to participate in the ongoing coordination, acceleration and harmonisation of standards development for the smart grid. The SGIP does not write standards, but serves as a forum to coordinate the  development of standards and specifications by many standards development organisations.

The SGIP reviews use cases, identifies requirements, coordinates and accelerates smart grid testing and certification, and proposes action plans for achieving these goals. EnerNex Corporation serves as the administrator of the panel under contract to NIST.

The SGIP initially has two permanent committees. One committee is responsible for maintaining and refining an architectural reference model, including lists of the standards and profiles necessary to implement the vision of the smart grid. The other permanent committee is responsible for creating and maintaining the necessary documentation and organisational framework for testing interoperability and conformance with these smart grid standards and specifications.

The SGIP is managed and guided by a Governing Board that approves and prioritises work and arranges for the resources necessary to carry out action plans. The Governing Board’s responsibilities include facilitating a dialogue with standards development organisations to ensure that the action plans can be implemented.

The SGIP and its Governing Board are an open organisation dedicated to balancing the needs of a variety of smart grid related organisations. Any organisation may become a member of the SGIP. Members are required to declare an affiliation with an identified Stakeholder Category (22 have thus far been identified by NIST and are listed in the box). Members may contribute multiple member representatives, but only one voting member representative. Members must participate regularly in order to vote on the work products of the panel.

INTERNATIONAL COLLABORATION
Many countries have begun or are planning to modernise their electric grids. The United States’ electric grid interconnects with Canada and Mexico, and the equipment and systems used in the grid are supplied by companies that address a global market. Therefore a major goal of the NIST programme is to utilise international standards wherever possible, and to ensure US participation in the development of smart grid standards by international organisations. The NIST programme is working closely with IEC Strategic Group 3 on Smart Grid, and is looking to various IEC TCs, such as TC57, which is working on a Common Information Model for the smart grid, to provide key parts of the NIST Smart Grid Framework. Other international organisations whose standards play an important role in the NIST framework include IEEE, IETF, ISO, ITU-T, SAE and others.

Realisation of the smart grid represents one of the greatest engineering challenges of the 21st century. A robust foundation of standards is critical to achieving the interoperable and secure electric infrastructure necessary to achieve reductions in carbon emissions and a secure energy future. NIST is proud to play a part in making it happen.