The Advanced Research Institute (ARI), located in Arlington, VA, provides a platform whereby Virginia Tech’s engineering and computer science researchers can interact with smart grid stakeholders in academia, government, and industry in and around Washington DC. ARI also serves as the gateway to the smart grid R&D base at the main campus in Blacksburg.

In fall 2009, Virginia Tech was awarded a $1.25 million five-year contract by the US Department of Energy (DOE) to develop, manage, and maintain a public Smart Grid Information Clearinghouse (SGIC) web portal that encourages use of electricity in an environmentally responsible way. The award was announced by US Energy Secretary Steven Chu as a part of the $47 million in funding under the American Recovery and Reinvestment Act for eight projects to further smart grid demonstration projects in seven states.

Virginia Tech is working on the smart grid portal with project partners IEEE (the world’s leading professional association for the advancement of technology) and the EnerNex Corporation, assisting us with content, which includes demonstration projects, use cases, standards, legislation, policy and regulation, lessons learned and best practices, and advanced topics dealing with research and development.

Our entire team is very pleased about being the only one in the United States chosen to develop, manage, and maintain the SGIC web portal. The portal merges two infrastructures: electrical and intelligence. It is designed to serve both as a repository for public smart grid information and as a facilitator for direct sharing and dissemination of smart grid information among various stakeholders. This gives us a unique opportunity to interact with governments, industries, regulatory agencies, and professional associations – both in the United States and globally – that are actively engaged in this new technology. In short, the portal is an essential gateway connecting a smart grid community to the relevant sources of information currently scattered and distributed on the worldwide web.

The kind of information the portal offers will benefit many different groups, including state and federal regulators who can use this information as they deliberate rules and evaluate the impact of their investments in smart grid technologies and software. In addition to policy makers, engineers, entrepreneurs, and businesses have shown a keen interest in various aspects of smart gird technology.

If the smart grid is to be successfully integrated into our everyday environment, there is another important group we need to consider: consumers. While they may recognise the term from President Barack Obama’s speeches or references to it in television commercials, it is probably safe to say that the majority of consumers are not sure exactly what a smart grid is or what it means for them.

To meet expectations and win support from the consumer, the smart grid must be both practical and beneficial. The building blocks needed to achieve this objective are:

One growing concern, for example, is how to actually “green” the grid by increasing amounts of solar and wind energy sources when the inherent nature of solar and wind is neither stable nor reliable. One common response to this concern is to provide large amounts of storage and back-up generation. But, as the penetration of such intermittent sources into the grid increases, this kind of solution will not be cost effective because of the infrequent use of such storage devices and the high costs associated with it.

Other questions are also raised: What will the role of the individual homeowner be in the smart-grid environment? Will customers have to worry about when to cook, when to wash and dry their clothes, when to charge their plug-in electric vehicle, or when to use the stored energy in their electric vehicle to minimise the amount of purchased power and therefore avoid high peaking rates? 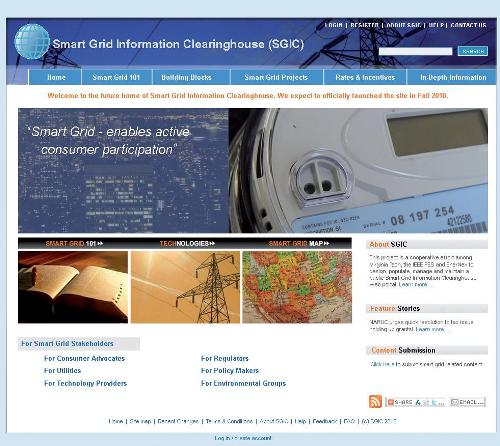 I envision a scenario where entrepreneurs will come forward and consolidate a number of end users and sell or buy on their behalf to make a business case, thus providing the homeowner with the benefit of the smart grid without the associated difficulties. Dealing with consolidators also benefits electric utilities because they are saved from the complexity of dealing with a very large number of customers with different levels of sophistication.

I also imagine that non-utility players will enter this smart grid market, attempting to provide solutions. For example, many computer networking companies have plans to deliver an end-to-end, highly secure network infrastructure that helps utility customers take greater advantage of energy efficiency, demand reduction, and the integration of renewable energy sources at their homes and businesses. The end result may not be cost reduction but more value for the money spent and an environmentally friendly power grid.

To ensure a groundswell of interest in the smart grid, it is very important that the SGIC reaches out to everyone, including high school teachers and students. Awareness is critically important because regulators have to look at consumer interest. They will not go out on a limb for a smart grid initiative unless they get pressure from an educated and informed public who wants it available to them.

We are projecting that the SGIC will be up and running within about nine months. In addition to the extensive data collection effort going on from US sources – utilities, vendors, regulatory agencies – Virginia Tech has been gathering information from the State Grid Corp of China, the Joint Research Centre of the European Commission in Ispra, Italy, and several Japanese electric power companies such as Tokyo Electric Power. We are also in contact with people in India, Korea, Singapore, and Australia about their smart grid work. Our subcontractor, IEEE, has been looking at content being developed by standards boards and other task forces reporting to it, which will be included in the clearinghouse. Our other subcontractor, EnerNex, is working with the electric power industry representatives in the United States who are actively involved in deploying the smart grid technology.

We will be asking firms, commissions, and organisations posting smart grid information on their websites to provide RSS feeds to the clearinghouse. The clearinghouse will also include all relevant DOE reports and publications. The goal is for the SGIC website to always have current and up to date information that will promote and encourage an environmentally sound use of electricity among all users. We know this is an ambitious goal and it cannot be achieved overnight; it will take many years to evolve. But we also know that the smart grid is well worth all of the time it takes to develop because it is critical to bettering our world’s future.