In 2000 JEA established itself as a leader in the United States municipal utility community with the decision to deploy a fixed advanced meter reading network (NMR) for both water and electric services. The focus of the deployment was to improve customer service, increase operational efficiency and reduce operating costs.

To optimise the benefits made available through its advanced metering infrastructure, JEA uses a Meter Data Management System (MDMS) to collect, process, and store meter data from over 754,000 meters. JEA has also established an organisational structure to support the management of access and dissemination of information to multiple authorised end users throughout the organisation.

AN INTEGRATED SYSTEMS APPROACH
Ownership of the NMR belonged to the Technology Services department during project deployment and transitioned to Customer Relationships for full integration into operations and maintenance once the deployment neared completion. With the transition of the project to full integration, the term Advanced Metering System (AMS) was used to collectively represent the NMR and the MDMS components.

Establishment of an encompassing advanced metering system emphasises the interdependency and integration of systems that exist with advanced metering technology. Having this recognition greatly enhances the development of synergy between the technological and business decision making processes and the interaction between the workforce processes. The goal is to establish the fundamental business practices that will promote the establishment of seamless interfaces between present and future systems such as billing and customer care applications, online customer presentment of data, outage management, asset management, field automation, rates and tariff development, and systems associated with planning and engineering.

The MDMS is considered the core of the advanced metering system since it serves as a repository for all meter data and is used by managers as a source of automated metering infrastructure data that is dispersed to multiple systems, subsystems and applications.

JEA uses its MDMS to enhance the value of data that is collected through its three meter reading systems – just over 428,000 electric and nearly 296,000 water meters associated with the CellNet advanced metering fixed network; 28,000 meters read by the Itron handheld system infrastructure; and 738 meters served by the MV90 system for large commercial customers.

TRANSITION TO DATA STORAGE
Since the inception of the NMR deployment in 2000, JEA’s system for meter data collection and management has evolved across three systems from early use of the customer information system to establishing a home-grown system, referred to as MSPR, to engagement with a vendor supplied system.

It was not long after the implementation of the NMR project that data was available for input into a meter data management system. The customer information system, known as CAIR, was to be used as the data repository since it provided the basic capabilities to gather data in a manner to support existing processes for billing and customer care applications. With continued deployment of automated metering infrastructure it was quickly realised that plans to incrementally rollout increasingly sophisticated uses for the data would overwhelm the system. The Technology Support department undertook a project to relieve the customer information system by developing an in-house data management system, tagged internally as MSPR. The MSPR was capable of keeping pace with NMR development; however, the demand on internal resources to continually update and expand the MSPR to provide increased volume and system flexibility posed a tremendous challenge to the Technology Support team. After conducting detailed research in conjunction with a consulting firm that had ground breaking experience in the automated metering infrastructure business, the decision was made to partner with an outside vendor to develop a meter data management system.

The project implementation was done in three phases. The first was the development of a very detailed requirements document and project plan to define the desired functionality requirements. This was followed by execution of the project plan to install the selected MDMS software (e-Meter), including integrating the software with JEA’s multiple meter data collection systems as well as other JEA supporting systems. Lastly, steps were taken to ensure that the MDMS possessed enhanced functionality to support continued growth and additional functionality beyond meeting current applications.

With a dedicated MDMS in place JEA was ready to pursue system planning functionality that would better leverage the business benefits of automated metering infrastructure beyond the monthly meter reading process.

BUILDING ORGANISATIONAL SUPPORT
The business owner of the AMS is the Director of Meter Reading, Billing and Collection (MRBC) which is under the VP of Customer Relationships. Within MRBC the AMS Manager is responsible for ensuring proper day to day operations of the system. The AMS manager monitors current operations and conducts actions which will enhance system efficiency. A task presently being undertaken involves investigating use of the extrapolation and interpolation feature of the MDMS to bridge the gap when a meter read is not obtained during the customer billing window.

JEA established the department of Corporate Data Integration (CDI) to coordinate the implementation of future meter data usage and serve as the executive agent to promote the optimisation of the AMS. The CDI department will utilise the MDMS as a dependable and scalable data management system to drive conservation in production and consumption. The team will focus on reducing demand by making the consumers aware of their energy usage and associated costs.

The MDMS provides functionality which has allowed CDI projects to be undertaken that enhance utilisation of meter data and serve as building blocks to meet JEA goals. The CDI team can develop numerous profiles for research by using the data collected in the MDMS. Depending on the nature of the project or programme, data can be automatically transferred between the MDMS and JEA’s Data Warehouse (DW). JEA’s DW is used for long term storage of data and as the repository of choice for providing flexibility in system access, data analysis and conducting miscellaneous queries.

JEA also has an AMS Executive Steering Committee which serves as the governance body to oversee current and future development of applications involving the allocation of AMS related data and resources. An AMS Business Analyst is also assigned to fill the vital role as liaison between Technology Support, business owners and potential users of consumption information.

The AMS Executive Steering Committee, in conjunction with the AMS Business Analyst, is responsible for establishing the executive policy and strategic plans for all aspects of the AMS and automated meter infrastructure with an emphasis on operational and technological improvements. The mission of the AMS Executive Steering Committee is to review business objectives and technology strategies to ensure that optimum effective alignment occurs when applying JEA’s technological and operational infrastructure investments. The AMS Business Analyst also serves as principal monitor, regulator and auditor of the MDMS in its capacity as the central data repository as demands are made for the alignment and distribution of data by multiple departments within JEA.

UTILISATION OF DATA
In addition to conducting research in demand side management, work is done in load research where load profile and consumption data are analysed to offer load management applications, electric and water system-wide conservation initiatives, and pricing schedules. Also, work has been done in the area of system load snapshot to optimise the utilisation of distribution system assets and enhance transformer load management by analysing system utilisation data.

Other utilisation of the MDMS supported data will involve applications ranging from real-time customer care applications to water load profiling. The more detailed applications will provide residential consumption in the form of home information profiles for comparison of consumption use by similar type households. The data will be made available to customers for comparison and study to support development of energy conservation behaviour. A long term goal is to make consumption data accessible on-line to all customers. As a result of AMR systems, the amount of data about consumers’ energy usage increases significantly. A sample of the amount of data compiled for one project which supports the study of 15 minute interval data from fixed network is shown in Table 1. 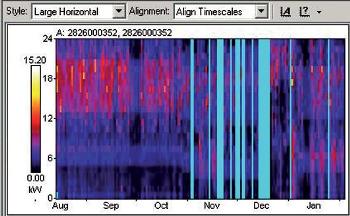 Another project involves the display of interval data showing power usage by selected customers (Figure 1). The various colours correspond to kW usage of an account as tracked over a twenty-four hour period for each day of the month. The aqua colour reflect periods where data was not received for various reasons, ranging from non receipt of end point transmission to incomplete transfer of data between the MDMS and the DW. The MDMS is capable of performing validation, editing and estimation to substitute for data where necessary. This assists in supporting the accuracy of the data provided when reads are not received. 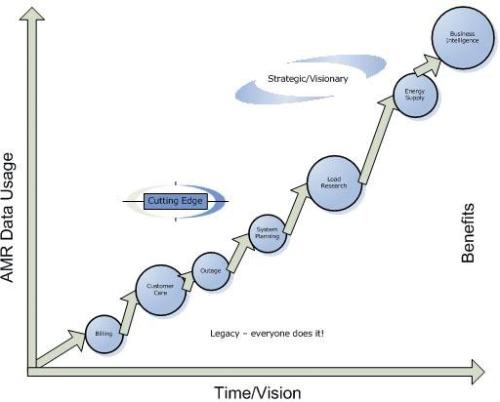 LESSONS LEARNED
JEA’s business case analysis set the stage and established the momentum for successful implementation of the MDMS. Continued success rested with solid communications and detailed coordination within and outside the organisation. Principal considerations: