US consumers are prepared to pay more on their bills to ensure the power grid is reliable, according to the results of a survey conducted by GE’s transmission and distribution arm.

Among more than 2,000 US adults aged 18 and over, 41 per cent of Americans living east of the Mississippi River are more willing to pay an additional US$10 per month to ensure the grid is more reliable compared to 34 per cent of those living west of the Mississippi, according to the survey, conducted by Harris Poll in May and June 2014.

The survey also found that in the past 12 months, consumers living east of the Mississippi experienced nearly three times more power outages on average than those living west of the Mississippi. Of all adults in the US who experienced an outage, more than half (56 per cent) were without power for at least one hour during their most recent outage.

John McDonald, director of technical strategy and policy development at GE’s Digital Energy business, commented: “We live in an on-demand world that depends on electricity. Our appetite for automatic is so great that millions of American adults would be willing to pay more on their utility bills to maintain their electrified lifestyles.”

As energy consumers’ expectations evolve, so does the way they communicate with utilities.

In the event of a power outage, 70 per cent of US adults would prefer to communicate with their utilities digitally or online, whether calling them from cell phones and smartphones (60 per cent), sending text messages (14 per cent), contacting via utility websites (11 per cent) or sending an email (9 per cent). Conversely, 36 per cent of US adults still prefer to communicate with their utilities via a traditional land line.

“As our expectations for up-to-the-minute data increases, consumers will demand that utilities leverage digital communication and social media tools to keep them informed in real time,” added McDonald. “To meet this growing demand, domestic and global utilities have an opportunity to partner with consumers to better understand how their digital lifestyles are shaping their energy consumption habits.” 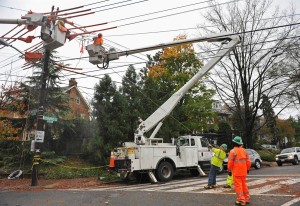 In looking at the root cause of power outages, 50 percent of US adults believe natural disasters and weather-related events are the greatest threat to the US power grid.

This threat is most evident for those in the Northeast, with 61 per cent of US adults in this region claiming weather as the greatest threat to the grid compared to 48 per cent in the South and Midwest and 43 per cent in the West.

Utility of the future

Some power providers already are anticipating and planning for the grid of the future through grid modernization strategies—essentially an ‘energy Internet’ delivering real-time information and knowledge to empower consumers.

USDA comes to aid (again) of US power grid