Rising electricity prices, lower PV system costs, statelevel solar requirements, and a growing interest in clean energy will continue to drive recent growth trends in the coming years. By 2015, the number of grid connected systems could approach 100,000 per year with over 1,800 MW of capacity, with growth distributed more widely across 10-20 states, particularly those with solar requirements in the west and northeast (Figure 2).

In contrast to Europe, where feed-in tariffs have generally led to PV systems interconnecting on the utility side of the meter, nearly all PV systems in the United States are installed at customer locations on the customer side of the meter. In this net metering configuration, the PV systems offset on-site consumption at retail rates, with the electric grid managing any over- or under-generation.

The details of net metering policies, such as the maximum individual system size or treatment of monthly or annual excess generation, vary across all fifty states, which can particularly impact the larger commercial PV system market (Figure 3). In addition, interconnection procedures vary across states, and sometimes within states by utility.

This rapid growth of PV markets and the fractured US PV integration environment are seemingly at odds with public policy goals, utility management needs, and customer generator desires. And while significant solar markets are currently limited to two US states, the expansion to the next tier of state markets presents an opportunity to implement best practices as policy details are reassessed or implemented. Ultimately, integrating these tens of thousands of new PV systems into the electric grid and managing these new accounts over time will require changes to current metering and interconnection practices to reduce transaction costs for both the utility and the customer-generator. In particular, smaller PV systems are more sensitive to these transaction costs, as they can represent a higher percentage of overall financial and time resources.

UTILITY SURVEY
To create a baseline of current residential utility metering and interconnection practices, the Solar Electric Power Association (SEPA), in collaboration with the Interstate Renewable Energy Council (IREC), developed and implemented a national survey of electric utilities across the United States. The main components of the survey covered:

Sixty-three utilities representing a cross section of utility types (i.e. investor-owned, public, co-operative, etc.) and geographic diversity participated in the survey. The utilities that responded to the survey are, on average, ahead of the curve in terms of solar deployed in their service territories and are not necessarily representative of the typical US utility. However, the lessons they have learned provide excellent foundations for other utilities as PV markets expand into new areas of the country.

The overall survey results suggest that utilities are generally accommodating the interconnection and net metering of residential solar PV projects using existing systems, with manual ‘work-arounds’ as necessary. While essential when incorporating net metering and PV into an existing system, these patches include labour and equipment costs that can be avoided as new infrastructure or procedures are deployed.

SURVEY RESULTS
Solar experience
When measured by the number of solar electric systems per utility, utility solar experiences are heavily skewed among a few utilities, especially those within California. Nationally, the average utility had a mean of 557 solar systems in its service territory, but a median of only 28, indicating a wide variation in numbers. Four utilities in two states had more than 1,000 PV systems each, with a combined solar system total equalling 82 percent of the PV systems reported. At a slightly lower threshold, 18 utilities in 11 states had more than 100 PV systems each, with a combined total equalling 98 percent of the systems reported. Sliced geographically, the 13 utilities from California responding to the survey account for 85 percent of the total number of PV systems reported. These numbers indicate a very high concentration of solar experience among relatively few utilities in a few states at this stage of solar electricity deployment. But, as was mentioned earlier, the growth of PV markets is anticipated to move into new areas with new utilities over the next five years.

Metering practices
Survey respondents generally indicated few problems related to reading the meters of net metered PV systems. However, the survey results and subsequent utility discussions indicate that existing utility billing/accounting systems generally cannot easily accommodate net metered customers. Many have to patch billing software or manually pull and bill these customers separately because of this incompatibility. Even for the utility with the most solar systems in the US, penetration has not reached a level that would dictate changing their system entirely based on solar alone.

Including net metering capability during evaluation and selection is recommended for those utilities planning to deploy AMI technology in the future, which can reduce costs compared to implementing post-deployment fixes. Incorporating the data from AMI will likely also entail adjustments to utility billing systems, which may provide an opportunity to upgrade and accommodate net metered customer billing in a more integrated process. The cost of patching a foreseeable problem, even for a small portion of customers, is likely much higher than reasonable foresight suggests. Major changes to billing systems, driven by non-net metering needs such as AMI, may provide the opportunity to piggy-back the issue into the overall plan.

Metering at the point of common coupling, i.e. the metering socket, will only indicate net PV generation and not total PV production, and an additional meter is needed before any onsite consumption occurs. The majority of utilities do not require a second meter for this purpose, but for those that do, the average cost was $170 per installation, and results varied as to whether the utility or the customer was responsible.

The decision to deploy new infrastructure, such as billing software or upgrades, second meters, and/or smart meters, should be balanced against the intent to reduce transaction costs. While net metered accounts represent a small number of the overall customer base, manually managing these accounts will become less feasible as the number of PV systems moves from tens to hundreds, and in some cases thousands, in emerging state PV markets. Additionally, the system size, renewable energy certificate market, and inverter capabilities may point toward examining the second meter as an option rather than a requirement for these small systems. Finally, smart meter technology and accounting/billing upgrades during this process should be compatible with net metering to avoid predictable compulsory fixes later.

Interconnection practices
Safety is of the utmost importance to utilities and to the public they serve. As more and more distributed energy resources are connected to the distribution system, it is critical that these systems are connected in such a way as to avoid any possibility of harm to line workers and others. Interconnection standards for PV seem to be converging around the IEEE 1547 standard, with over 60 percent of utility respondents utilising them, either by utility or state policy. National standards, adopted at the local level, provide efficiencies for equipment manufacturers, utilities, PV businesses, and customer-generators.

Most utility respondents (over 75 percent) do require a final inspection for residential PV installations, but four did indicate that they do not require an inspection if certain information and equipment parameters are met. A majority also do not require proof of liability insurance from the customer-generator. Interconnection application processing times averaged one month, but interconnection delays were occurring largely outside of the utility’s jurisdiction, based on incomplete documentation from the customer or delays with building permits. Both the standardisation of requirements and collaboration among the utility, local code inspectors, and the solar installer community could serve to streamline the interconnection processes. 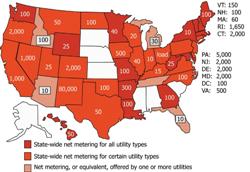 Documentation and fees
A final set of questions in the survey was designed to understand more about the documents that residential customers must review and complete in the process of installing a net metered PV system, along with the fees that utilities charge.

Of the 54 utility respondents to this set of questions, over half utilised just one or two documents to complete the process of installing a net metered residential PV system. An additional question matrix followed, asking the utility respondent to indicate what forms the customer must fill out and/or sign in order to interconnect and net meter a PV system. Only one strong trend emerged – 40 out of 50 respondents indicated that customers must sign an interconnection agreement. As indicated by respondents, the number of pages of this document was generally under ten, with just five respondents indicating that their interconnection agreement exceeds ten pages.

Several utility respondents indicated that they are working toward developing a single document for residential customers seeking to install a home PV system, and that standardisation in documents and terms across utilities may be prudent. This process could potentially be improved, while maintaining information quality, by revising these technical materials in consultation with the marketing and communications staff, instead of leaving these matters in the sole domain of lawyers and engineers.

Finally, utility respondents were asked to indicate which fees, if any, they require residential customers to pay in the process of installing a net metered PV system. Only 12 of the 52 utilities responding to this set of questions indicated that they charge a fee. And of those that do charge a fee, only four utility respondents charged a fee greater than $100.

Solar experienced utilities
Nationally, only seven responding utilities had 500 or more residential PV systems currently installed within their service territory (subsequent research indicated an additional eighth utility meets this system threshold but did not respond to the survey). Approximately 29,000 residential PV systems are currently installed within the service territories of these seven utilities. These utilities have the most experience in working through issues associated with the interconnection and net metering of small PV systems. Several common characteristics and practices were shared by these seven utilities, including:

CONCLUSION
While distributed residential PV is a small niche market, it is growing rapidly in some parts of the country. As the cost of a home-scale PV system continues its downward price trend, electricity prices continue to rise, and environmental concerns come to the forefront, more and more customers will be choosing solar. Some estimates project 100,000 systems per year by 2015, which will require streamlined processes to avoid excessive time and monetary costs for both customers and utilities.

This metering and interconnection survey has served to identify current practices, which generally take the form of working within and around existing systems to accommodate a relatively limited number of requests for residential net metered PV installations. As meter reading systems, billing software, accounting systems, and smart meters are upgraded and/or deployed, utilities should consider their compatibility with net metering. While the number of net metered customers may not constitute a large percentage of accounts, there are potential costs related to labour and equipment that result from retroactively managing these specific accounts. While some utilities have invested in upgrading systems to accommodate net metered customers, each utility must weigh the costs and benefits of doing so with the future – rather than the present – in mind.