Until recently, people living in industrialised nations have been accustomed to a world where energy was abundant and non-topical. Outside of gasoline prices, hardly anyone is aware of the price he or she pays for energy, without looking it up specifically. But with oil prices now around US$140 per barrel and with further increases expected, as well as likely increases for natural gas, the cost of energy has moved to the forefront of public attention.

Cost alone does not address the problems of energy management in today’s landscape; capacity is just as big an issue. Some regions of the world have been made painfully aware of limitations in the capacity of electrical generation and the electrical distribution grid. Many neighbourhoods understand what it is to be shut off in order to protect the entire electrical grid from failing. And even this does not address failures of actual electrical supply, which is not uncommon in many countries.

Now and in the future, energy consumption and cost will get more attention from consumers. Energy tariffs will follow more complex models and differ between suppliers. Energy pricing models will change much more frequently than the meter infrastructure. In addition, international treaties regarding global warming and corresponding regulatory changes, as well as actual availability of natural resources, will be factors that affect energy distribution and consumption.

It is well accepted by the public that an obviously effective way to counteract the cost and availability of energy sources is to reduce the use of energy. This is not just self interest or altruism, as the rules and standards for making homes energy efficient have been strengthened, and new regulations are emerging that are targeted directly at reducing the energy consumption in every home, and not just new buildings.

In short, energy conservation and efficient energy usage are key questions for both supplier and consumer, now and in the future. Advanced energy control is set to play a pivotal role in this new environment of heightened awareness.

Smart metering and the way houses work
The movement to smart metering by the utility industries and their regulatory authorities is one trend that affects how we will control energy use in our homes in the future. Today it is common that a consumer receives only one electricity meter reading per year. And even in countries where monthly reading is common, most consumers are not aware of their energy consumption or the effects of their attempts to save energy. For most consumers globally today, electricity is paid at one flat rate, although the availability and cost differs largely during the day.

In this context, smart metering does two things. First, it adds displays in the home that show the consumers their use of electricity, with the hope of causing a “reduction by awareness”. Secondly, smart metering provides for bidirectional communication between the utility and the consumer’s meter, enabling more flexible rate plans, demand based pricing, and more direct control of the consumption.

But for energy control from a supplier/utility perspective, this has two consequences. First, simply switching appliances off or load shedding of devices is counterproductive to saving energy. Forcing devices to switch off in load shedding commands would interfere with the device’s energy control algorithms. While such load shedding may be required and even desirable in a certain emergency situations to avoid overload and failure of the grid, it will frequently lead to increased total power consumption due to the operation patterns after such a shut down. Secondly, shutting off devices driven by grid requirements, and not by consumer needs, severely impacts the comfort of the user. Obviously, consumers would strongly object to any such measures if they occurred on a regular basis.

Energy control must be integrated with device control in order for advanced energy control to be effective. Energy control applications and home appliances need to be enabled to exchange information about energy use, opportunities for saving, overall energy availability and cost, and also targets for reduction of consumption.

When integrated with home control technologies, the saving of energy can even occur together with an increase of user comfort in lighting, climate and other home systems. Achieving this can be a key driver towards widespread consumer acceptance and rapid adoption.

The internet – or not
The use of the internet for control of the home from remote locations has already started. Indeed, new energy providers such a Mødstroem in Denmark have built their business model on the use of their customer’s Internet connection. However, not all communication for smart meter applications in homes will occur over the public internet in the future.

Having one network reaching into the home for meter reading and supplier driven energy control that is separate from home internet access could become the norm. However, ownership, security, governance, control, and cost would play key roles in that decision. Furthermore, there are already multiple types of technology that have been specifically developed for smart meter networks.

No one expects that one single type of media and protocol will be used for meter reading networks in the future. Already there is at least powerline communications, license-exempt short range wireless RF devices, and mobile communication devices based on GSM/GPRS in the market. This is in addition to older systems of one-way control (e.g. via public radio channels). Furthermore, it can be expected that newer technologies such as WiMax will also play a role.

It will be essential for the success of advanced energy control solutions and meter reading networks to be able to integrate closely with both general home networks based on TCP/IP and the internet as well as with home control networks.

Z-Wave addresses all the requirements
Given the aforementioned considerations, the technology requirements for advanced energy control can be easily derived. The work on the Z-Wave Advanced Energy Control (AEC) framework is based on a deep understanding of these requirements including convergence with TCP/IP.

An overview of the most important requirements and identified and reflected in the AEC framework is as follows.

Flexible, extensible and universal
A framework for smart meters or advanced energy control needs to be universal in terms of the communication topology, the structure of devices, and the control features that can be provided. Obviously, this does not mean that every conceivable feature needs to be built out entirely in every variant, deployment or type of device. Instead it must be possible to extend specifications at any time, with no loss of investment from previous development and deployment.

Obviously, supplier offerings, energy rates, structures of tariffs and plans and the competitive landscape, not to mention the regulatory environment, will change much more frequently than new meters will be deployed. Regulations will continue to differ regionally or even between competing suppliers. Furthermore, different environments and building styles will continue to drive differences in what is the most economical and suitable WAN technology. 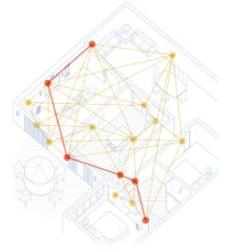 Robustness and reliability
Only a technology that is robust and reliable in all situations will be suitable for widespread, mass market consumer deployment in homes, and ultimately in supplier’s smart meter networks.

Given the very high number of customers and relatively small revenues, the margin for error in robustness and reliability in this space is exceedingly slim – much smaller, in fact, than the advanced energy control solutions used today for large commercial customers and within the electrical grid. In the mass consumer market, a 1% error rate that requires a technician’s visit can easily lead to tens of thousands of calls.

In considering any risk to the robustness and reliability of a wireless advanced energy control technology, it is very important to consider the current and future use of license exempt frequency bands. If there is no interference protection through the regulatory environment, the risk may be very high. This is especially true in the 2.4 GHz band, which is already highly saturated with household products and is becoming even more crowded with high bandwidth applications like HD video. Any smart meter solution operating in the 2.4 GHz band is severely at risk from interference from such WLAN devices and other low cost radio solutions.

It is clear that the sub-1 GHz band used in Europe, with its duty cycle limitation, provides a much better protection of investments as the risk of harmful interference from other RF devices is effectively mitigated.

Maturity
With regard to the points already raised, the maturity of the underlying technology for advanced energy control is equally vital for success.

Interoperability
The core of a smart meter solution would have to offer interoperability between devices from multiple manufacturers, between devices of different applications, and even between multiple generations of its technology. When looking at the landscape of devices in homes, a smart meter solution needs to interact and therefore interoperate with devices in the home. Interoperability with home control is therefore, an absolute requirement.

Low cost
With millions of devices to be deployed in consumer markets and with operational costs often under scrutiny by regulatory authorities, low cost of the technology used for advanced energy control would be another important criterion. In part, the success of advanced energy control depends on the deployment of supporting functions in everyday devices. Low cost is obviously a key enabler to accelerate this.

Low costs to set up and maintain are also important. Having to spend too much time to install the corresponding devices, and/or requiring specialised skills and highly trained personnel necessary for installation, would severely impair, delay, and even prevent the benefits of advanced energy control.

Besides the initial deployment the costs over the lifetime of a solution need to be considered. As examples it would be important that any problems, should they occur, would be easy to identify, fast to diagnose by standard skilled technicians (ideally already at a telephone help desk), and last but not least, simple to correct.

Security
Security is an important concern for an advanced energy control solution. The integrity of meter readings, the meter and its configurations, load control of devices in the home and even the personal information of consumers are a risk. Solid security technologies are available and have become very affordable. Multiple suitable approaches for smart meter and advanced energy control solutions exist.

When thinking about security in this context, it is important not to limit it to an academic or theoretical level, but to consider the human factor – the organisational costs, complexities and risks, as well as the operational costs.

Based on the experience in other markets – such as cable TV offerings with smart cards in Europe and GSM phones with their SIM cards – it is advisable to separate the network and operational security from the security of accepting authorisations/payments. An example would be to have one security layer to protect the communication of a meter with a display, or even more sensitive, the communication of an electrical meter with a WAN connection. The security for accepting a prepayment authorisation may be on a different level and could be controlled by a low cost smart card. It is essential that an advanced energy control solution enables these types of diverse deployment scenarios.

Given all these advantages in terms of technology, market suitability, versatility and adaptability to actual residential and consumer environments, Z-Wave can be seen as an obvious core technology to an advanced energy control future.