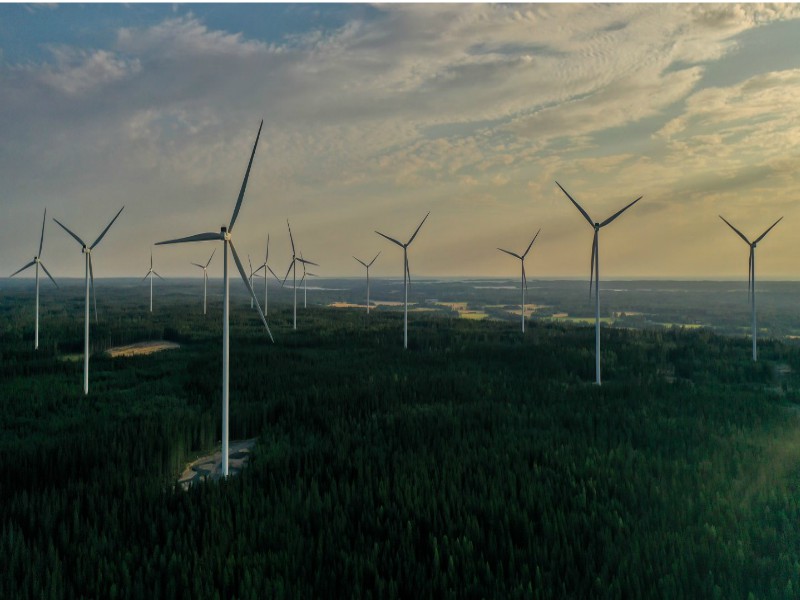 Amazon’s first operational wind farm outside of the United States has come online in Sweden – the first in a series of the company’s utility-scale renewables projects due to begin delivering clean energy to grids across Europe this year.

The project will deliver 280,000MWh of clean energy annually into the Swedish grid – the equivalent of powering 29,000 average homes in Sweden.

The wind farm’s launch takes Amazon one step closer to meeting its Climate Pledge commitments of being powered by 100% renewable energy by 2025, and of achieving net-zero carbon emissions by 2040, ten years ahead of the Paris Agreement.

Nat Sahlstrom, Director, Amazon Energy, said: “Our wind farm in Bäckhammar is a significant milestone in our journey towards powering our operations with 100% renewable energy.

“We’re delighted that the project has started to produce clean energy.”

Guido Bartels, Managing Director, Nordics, AWS, adds: “We are proud that our wind farm in Sweden is the first Amazon utility-scale renewable energy project outside of the US to go online.

“We have been investing and growing in Sweden for almost a decade, and this affirms our commitment to creating a sustainable future not only for our company but also for the communities where we operate.”

The 91MW Bäckhammar project is the first of two Amazon renewable energy projects to come online in Sweden. The second, a 122MW onshore wind farm in Västernorrland, currently in construction, is expected to commence operations in 2022. In total, these projects will add 213MW of new clean energy to the Swedish grid.

The two sites in Sweden are part of the eight renewables projects – six wind and two solar – the company has announced so far in Europe, designed to supply clean energy to the electricity grids that serve AWS data centres and other Amazon facilities. In addition to Bäckhammar, two more of these projects – in Ireland and Spain – are also due to come online later this year. They will all deliver clean energy into the grids through unsubsidised Corporate Power Purchase Agreements (CPPAs)

By enabling CPPAs, Amazon is helping to add renewable energy to the grid, without direct government support. This helps reduce subsidy costs on other local energy users. Amazon regularly relies on unsubsidised CPPAs to enable new projects in Europe, including its most recently announced wind farm project, in Galway, Ireland, due to begin operating in 2022.

“In the past, subsidies have often been used to help develop the renewable industry, to ensure the technology can compete with fossil fuels,” Nat continues. “With projects like Bäckhammar we are showing it’s possible to add new renewable capacity without subsidy to the grid where we operate, and reduce CO2 emissions.”

Reducing water and energy use

Amazon’s sustainability efforts go beyond its commitment to adding new renewable energy in Sweden – the company is also innovating in water conservation.

To reduce both energy and water use in its Swedish data centres, Amazon employs direct evaporative cooling systems, which are designed to utilise outside air to cool down servers, and significantly reduce the demand for electricity and water to power air conditioning systems. This highly efficient cooling method optimises the newest AWS data centre designs for Sweden’s mild climate.

This results in Amazon using no water to cool its Swedish data centres for 95% of the year. During the few very hot days Sweden experiences each year, the company uses a minimal amount of water to help cool the air and remove heat from servers. “We develop our water use strategy by evaluating climate patterns for each AWS Region, local water management and availability characteristics, and the opportunity to conserve drinking water sources,” says Nat. “Taking a holistic approach, we assess both the water and energy usage of each potential cooling solution to select the most efficient method.”

Amazon has made ambitious commitments to achieving net-zero carbon by 2040 as part of The Climate Pledge.

These include: powering its operations with 100% renewable energy by 2025; making all Amazon shipments net zero carbon through Shipment Zero, with 50% of all shipments net zero carbon by 2030; ordering over 100,000 electric delivery vehicles, and investing $2 billion to support the development of technologies and services that reduce carbon emissions and help preserve the natural world.

Globally, Amazon has enabled over 90 renewable energy projects that have the capacity to generate over 3,000MW and deliver approximately 8 million MWh of energy annually.