Bioenergy is already the world’s largest source of renewable energy, responsible for 70% of the supply (and around 10% of total primary energy). Burning organic matter goes back to the invention of fire and is still commonplace around the globe. Yet it gets hardly any of the attention and policy support that’s given to other clean energy technologies like solar, wind and now hydrogen.

Bioenergy can and should play an even greater role, explain Seungwoo Kang and Elisa Asmelash at IRENA, particularly in hard-to-abate sectors like cement, chemicals, aviation and shipping. Fundamentally, its organic make-up allows it to substitute for fossil fuels. Produced sustainably, it can make farming and forestry beneficiaries of the transition. It can also create revenue streams for waste and residue. The production of the various new bio-technologies (from petrochemicals, polymers and cement clinker to biomethanol, biojet, advanced biofuels and BECCS) is still at an early stage of development and too costly, but that’s why the policy support is needed. The authors end with their recommendations to policy makers to help them develop strategies that uncover the full potential of their nation’s biomass resources.

The urgency of action to combat climate change calls for a swift and drastic transformation of global energy systems, moving away from fossil fuels towards renewable sources of energy, supported by increased efficiency and the reduction of total consumption. The goal is to create energy systems that guarantee a secure and affordable energy supply for all populations, while also protecting the environment and the climate.

Bioenergy does not generate the level of political and media excitement that other energy options, such as hydrogen, have received in recent times. And yet is has a significant and essential role to play in delivering many aspects of the energy transformation in all sectors and in building a climate-friendly circular carbon economy that delivers economic and social benefits. Deep decarbonisation in many countries will not be achieved without the full, but sustainable, use of biomass resources.

IRENA has been working with its member countries and other institutions over the last decade to help policy makers understand their biomass potential and to develop strategies for the sustainable use of their biomass resources. Earlier this year the Agency synthesised some key insight from that experience in order to provide advice to the G20 on the role of biomass and bioenergy in a circular carbon economy.

Have you read?
A net-zero carbon future by 2050 is still feasible says IRENA
What is the potential for renewables in Central and Southeast Europe?
Five key clean energy technologies to meet 2050 decarbonisation targets

IRENA’s Paris-compliant scenario[1] shows that the share of primary energy met with modern bioenergy could increase five times from 25 EJ to 125 EJ in 2050. Bioenergy’s growth prospects are mostly driven by the multiple roles it can play for the decarbonisation of all end-use sectors as a source of energy and as a feedstock that can replace fossil fuels.

Biofuels could play a particularly important role in the transport sector as an alternative to fossil fuels, complementing the greater use of electrification. IRENA’s analysis indicates that a five-fold increase in liquid biofuels use could be needed, rising from 153 billion litres in 2017 to 652 billion litres in 2050.

In the buildings sector, more than a three-fold increase of modern biomass, mainly for heating applications such as in district heating systems and building-scale furnaces and phasing out of traditional use of biomass need to be realised, from 5 EJ in 2017 to 16 EJ in 2050.

In the industry sector, biomass could play a key role in replacing fossil feedstock and as a fuel to produce low, medium and high-temperature heat, with a potential of providing up to one-quarter of the total final energy consumption in the sector (34 EJ out of a sector’s total 142 EJ).

Bioenergy could contribute 11% (or 2.6 Gt of CO2 emission) of this reduction and in particular, 0.6 Gt CO2 would come from biomass power generation, 0.7 Gt CO2 from displacing liquid fossil fuel with liquid biofuels, 1.1 Gt CO2 from solid biofuels and 0.2 Gt CO2 from biogas/biomethane use in end-use sectors including district heating (Figure 1).

Bioenergy will need to play a significant role in the deep decarbonisation of some challenging sectors, particularly cement and chemicals in the industry sector and aviation and shipping in the transport sector.

In the chemicals sector, biomass can be used as an alternative feedstock to fossil fuels in different ways. Biomass can replace primary petrochemicals with bio-based chemicals or replace fossil fuel-derived polymers (particularly plastics) with alternatives produced from biomass. However, it requires a substantial scale up as it currently represents less than 2% of total supply of synthetic organic materials.

Biomass can also be used for the production of methanol (which currently relies on coal and natural gas), called biomethanol. Biomethanol is the only form of renewable methanol existing today (less than 200 kt production compared to 98 Mt total), as e-methanol is still at a demonstration phase. It is produced mainly via three pathways: from gasification of biomass, from the pulping cycle and from biomethane. However, biomethanol’s production cost is approximately twice as expensive as conventional fossil-based methanol.

In the cement sector, biomass has multiple applications. It can be used as a partial substitute of clinker, as an alternative material in the construction industry and as a fuel for process heat generation. Process emissions will in part need to be offset through negative-emissions approaches, amongst which Bioenergy with Carbon Capture and Storage (BECCS) is likely to be important. BECCS applied to cement production is still at the proving stage with one large-scale demonstration project currently being developed in Norway and planned to be operational in 2024.

In the aviation sector, biojet is currently the only viable low carbon fuel consistent with achieving significant reductions in emissions. Global jet fuel consumption in 2017 was 430 billion litres, representing around 8% of total oil production. Biojet currently provides 140 million litres/year – an insignificant contribution. Today, the HEFA/HVO pathway from lipid feedstock is the only commercially available way to produce biojet and the cost of bio-jet is still 60% higher than conventional jet fuel. However, as an upcoming IRENA report will show, by diversifying feedstocks and conversion technologies there is significant scope to reduce costs and to grow that share rapidly in the coming decades. Achieving that, however, will depend on a regulatory support or significant carbon pricing.

In the shipping sector, advanced biofuels including biomethanol could play a key role for its decarbonisation. They can be used in blends or as drop-in fuels, and they can offer reduced CO2 emissions and thanks to their biodegradability, they are safer for the environment in the case of spills when unblended. From a technological point of view, biofuels are mature and require few adjustments to the existing engines of ships and port infrastructure. Economics, availability and feedstock sustainability concerns however currently limit their scale-up.

Bioenergy with CCS (BECCS) has a role to play in decarbonising some emissions-intensive industries and sectors and in enabling negative emissions. Its economics favour large scale processes (such as power plants, waste incinerators, cement kilns, etc.), and current BECCS use is only used at demonstration plant size, with five facilities operating which together capture approx. 1.5 Mt of CO2. Despite the considerable benefits of BECCS, there remain uncertainties around the practicalities and sustainability of large-scale deployments and the actual costs, which likely vary greatly depending on several factors (i.e. technology used, size of plant, etc.).

The wider benefits of bioenergy

Whilst contributing to the energy transition, bioenergy can strengthen the whole biomass system in several other ways. Firstly, it can create revenue streams for residues and wastes generated along supply chains that would otherwise be burned onsite. Secondly, bioenergy can help prevent environmental problems currently caused by those residues and wastes, such as methane emissions, whilst improving the economics of farming and forest management. Finally, the use of biomass can lower overall atmospheric CO2 levels if that use is managed and regulated properly. 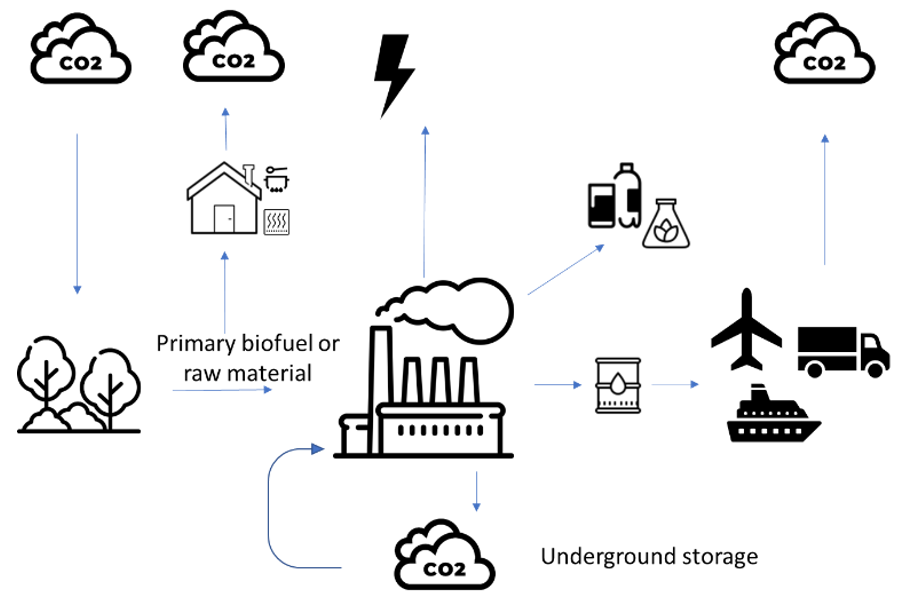 Despite the potential and benefits of biomass use, there are still multiple barriers preventing its full use globally. Key challenges include: high costs compared to other renewables and fossil fuels and lack of finance and a lack of specific regulations and policies.

A more recent challenge that biomass is facing is due to the Covid-19 crisis and the subsequent low oil prices. The dramatic decline in oil prices during the early days of the Covid-19 crisis threaten the development and use of biofuels. Whilst prices have recovered somewhat since early 2020, they still remain below the average price for the last decade and if maintained on the long-term, biofuels will likely continue to struggle to compete with conventional fuels.

Other emerging energy technologies face similar challenges, and these can be addressed. But biomass use is also being held back by negative perceptions among some policymakers and stakeholders. It is essential that biomass is sourced in ways that are environmentally, socially and economically sustainable and policy efforts rightly focus on ensuring that negative impacts don’t outweigh the positives. However, whilst there are legitimate factors to be considered, there are also misconceptions which too often lead to biomass being undervalued in long term energy strategies. Those misconceptions need to be addressed. Scientific understanding of how to utilise biomass sustainably has grown significantly in the last decade. With care and attention significant volumes of biomass can be used in national energy transitions.

Strategies for the full deployment of biomass

To fully and sustainably utilise biomass resources along a pathway that is beneficial for society and the economy and is climate safe, the following key actions should be taken:

This article was originally published on energypost.eu.

Seungwoo Kang is an Associate Programme Officer, Bioenergy at IRENA

Elisa Asmelash is an Associate Professional, REmap 2030 at IRENA